I’m a day late with this one, and a couple days late with some other things I’ve been meaning to talk about, but I’ve been pretty sick and out of it, so you’ll all have to forgive me f0r my timing being out of sync and my writing probably being less prolific than usual.

Anyway though, let’s talk a little about this article.

In our continuing examination of anthropology lecturer Eric Canin, who struck a student during a rally in early February according to the university’s internal investigation, we’ve found that two petitions are circulating campus regarding his suspension.  One that’s been put out by faculty members and supported by the California Faculty Association calling for his reinstatement and another put out by the Young Americans for Liberty (YAL) group on campus calling for him to be fired for infringing upon the free speech of students.

The piece I wrote in conjunction with my co-editor Sarah and our Editor in Chief Hayley goes into a bit more detail examining how each group sees the other’s petitions and charting out what the next steps will likely be in regards to the Canin controversy.  My primary contribution to the article was the information on the Republican side of the aisle, since I was the one in contact with most of the members of YAL and the College Republicans club.

You can see the article in its entirety here, and in the print version of the story we also included the complete text of both petitions.  You can check the issue in full at the Daily Titan Issuu archive.  It’s pretty worth looking at I’d say, and not even because I have extra bias toward the paper.

Next week we’ll be looking further into another lead we have regarding a meeting the College Republicans are looking to have with the student government on campus, Associated Students Inc., so look out for that too.

On another note, we got our business cards this week.  That doesn’t have too much to do with this story, but I think it’s cool and figure I should mention it while I’m talking about the Daily Titan. 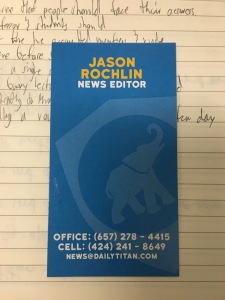 That’s about all for now however, so as usual if you want to see my full archive of work for the Daily Titan, you can see it over on the right!