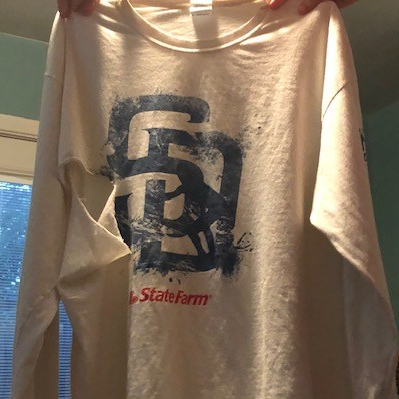 I wound up lingering around the house today in lieu of some planned activities because of unexpected car troubles.

Instead I did some chores around the house.

Mainly blowing through this mountain of laundry I’ve avoided for too long. 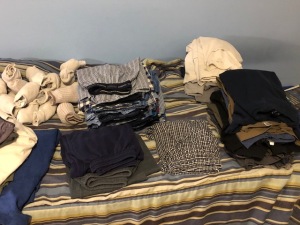 While doing so I had to confront that age-old question of what you do when something you’ve worn for a long time is pretty much beyond repair.

That white shirt I featured up above has been one of my pajama shirts since 2014.

I can tell you that specifically because it was a promotional gift I got at a baseball game in San Diego with a bunch of my old High Tide coworkers.

The game (and I couldn’t say what game it was because I was terrible about using Facebook — he said as though he’s any better now) was played up as an event to coincide with the Journalism Education Association conference happening that week.

We were in the city for that conference’s write-off competition, where I happened to win this award that’s still hanging up in my room:

Somehow that shirt continued to be huge on me for the next five years, but it has served me well in the realm of Dream Land.

Until about two weeks ago.

A small hole in the seam just underneath the shirt’s armpit tore far wider than I could have anticipated. Not just along the seam, but inward toward my sternum. My family leveed some complaints but I mostly dissuaded them under the conviction that it shouldn’t matter for something I’m just sleeping in.

Now that I’ve had time to mull it over, however… The shirt is not the most flattering thing in its current condition. Pulling it out of that pile of clothes really hit home.

So that means it’s about time I got rid of it.

By all accounts it’s just a shirt, and the objective part of me has no problem tossing it aside.

If you can really consider five years a truly ‘nostalgic’ period.

Hopefully writing up this little account can give all of you at home the chance to reflect on some fond memories toward your possessions as well. Because if you ask me, it’s important to remember that it isn’t really the goods that make us happy.

It’s the tales behind them that do.

So if you have any good memories you want to keep alive about innocuous goods, let me know. I think it’d be a fun little conversation to start.