Been a while, huh?

I’ve been enjoying my “book writing sabbatical” perhaps a little too much. A lot of my novel has gotten done, but there have been plenty of things over the last month I easily could have blogged about.

I was almost completely by myself for three weeks as Mom and Aly went to New York for a summer music program.

During that time I went to the L.A. County Museum of Art for a graduation party.

“It just looks like they ordered too many street lamps and built an art museum to make it look natural.” – @GallifreyFallen when he, @Cyvfnfjhffcd and I went to @LACMA to celebrate our friend Nina’s graduation pic.twitter.com/lE3cIXwpVU

I bought Mario Maker 2 and made a bajillion levels.

Having a party on Monday, so I decided to finally snatch up the sequel to my favorite Wii U game for some group Mario Making. pic.twitter.com/3ShTPBfqDO

I'm putting down Mario Maker 2 so I can focus on writing today, but I've been having such a great time building levels again that I thought it would be fun to share what I've made so far. If you have the game, feel free to check some of them out!

I hosted a full-on sleepover with my friends.

Going back to basics with some 2 a.m. sleepover shenanigans. Shout out to being a bachelor while the family’s in New York.

We saw Disney usher the end times by announcing some great looking Marvel movies at San Diego Comic Con, despite my hatred for their entertainment monopoly.

Normally I’d be writing something for the new Fire Emblem Heroes banner today, but I decided not to for a couple reasons. So here’s the Featured Image you’d see in case you’re feeling blue about my recent lack of blog writing. pic.twitter.com/v1dCw3q05M

Dad and I caught up on the latest season of The Flash, I finally saw (and was blown away by) Shazam and I watched Spider-Man: Far From Home for the second time.

Taking Aly to #SpiderMan so we can celebrate her return from New York.

Lots of potential content. But as you can tell, I’ve mostly been keeping my day-to-day exploits on social media.

More time to focus on the book and all that.

However, I might return to daily posts for limited time.

This week I’m on vacation in Florida, invited by my grandparents when they came to California for Graduation. I figure that’s worth recording for posterity.

Today wasn’t the most exciting part, however. Hence the long recap.

I flew out of LAX at 9:30 a.m., where I got to sit through that classic California traffic one last time.

This was actually my first solo experience in the airport. Every other time I’ve gone places there were family members or school-related functions to keep me company.

But it was easygoing, despite oddities like having to walk through a dog pen for the TSA or having my departure gate flip between two locations multiple times.

I decided to be that guy and get a GIF of the takeoff once we boarded. Which turned out nice in my opinion:

Then about four hours later, after isolating myself from the outside world to write and catch up on podcasts, I landed in Fort Lauderdale. 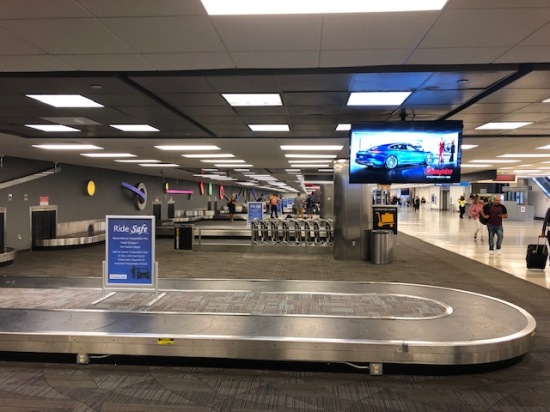 Though it was technically seven hours because I traveled into the future.

Isn’t technology amazing? I flew nearly 3,000 miles in a fraction of a day.

That was such a cool realization after we landed.

Though it was immediately followed by the realization that I decided to go somewhere with 90 degree heat and 64 percent humidity at the end of July.

I guess it was worth it considering I got picked up by these two:

Even if they took me to The Habit for dinner and gave me flashbacks of late deadline nights at The Daily Titan.

After that we came home so I could unpack and watch American Ninja Warrior with them over a cup of tea.

It took a minute to get over the existential panic of finding out I’d be staying in the “adult” bedroom usually reserved for Mom. But then the relaxation kicked in!

Or maybe it was the jet lag…

Either way, that’s all I’ve got from today. Stay tuned for the next leg of my journey tomorrow, whatever it may include.