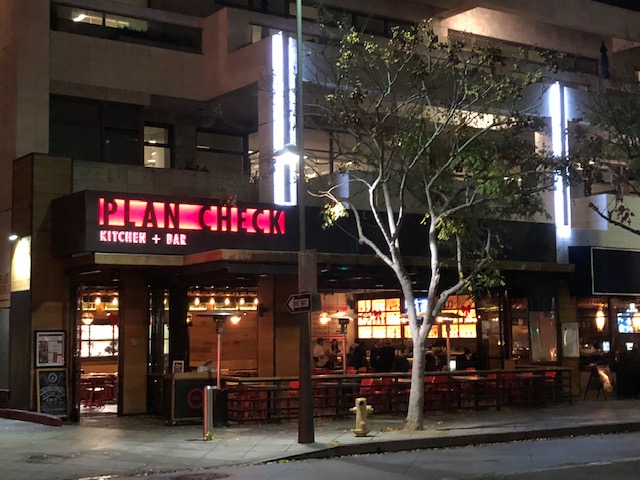 Got a late one for you, since interesting life stuff happened and that drove me to save my deep, contemplative “complains about Christmas” post for tomorrow.

I promise it’s not as bad as I hyperbole it out to be.

The family took a mini road trip out to Santa Monica tonight — random music mix out of iTunes and everything.

We met up with some of my Mom’s old college friends for dinner at the Plan Check Kitchen + Bar (pictured above) because they’re out here from Washington D.C. for Winter Break.

The table wound up getting split between the four adults catching up and the four kids more or less meeting each other for the first time, and even though I’m in a window that’s well past the high school-age problems all the younger kids were discussing, it was a good time. Food was nice, as were the atmosphere and company with that flashy Santa Monica pier right outside.

Can’t complain overall. In fact, I wound up making this joke out of the menu that killed me because I’m lame:

That’s for all you Teenage Mutant Ninja Turtle fans out there.

With all that being said, I wouldn’t want to waste an entire blog post just talking in vague generalities about a cool little family/friend dinner.

Nah, I’ve gotta take this time to talk about the one part of the night that I can complain about.

This place we went to had the absolute weirdest, arguably worst bathroom decor that I’ve ever seen in a restaurant.

It was so bad in fact that I decided to take a picture of it too — no private parts or dirty bathroom things involved.

So let’s break this down. It’s not a particularly large restroom, first off. There’s nothing wrong with a single-person bathroom, but having one means you need to compact the space well.

That said, the fact that this bathroom had both a urinal and a traditional sitting toilet seems a bit over the top for the space constraint.

A single toilet that serves both purposes needed for it would be more than enough.

But then there’s the real… How you say… Je ne sais quoi that got my mind racing about its sheer absurdity in the first place.

Despite having such a small space, they decided to put two mirrors in the bathroom. One of which is a full-body mirror.

Literally right next to the urinal.

To be fair, BOTH the full-body and sink mirrors were essentially surrounding the urinal. I swear, if one of those things was a foot over you would be trapped in the infinite mirror dimension just standing at the head.

Even without the trippy aspect of that, it was still bizarre and seemingly narcissistic to see a bathroom designed to essentially let you look at yourself no matter where you turned your head.

I know that out of all the strange things I’ve nitpicked on this blog, the mirror placement in a Santa Monica restaurant is arguably the strangest.

It just bugged me enough that I figured it would be worth bothering you all on your Christmas Eves over it.