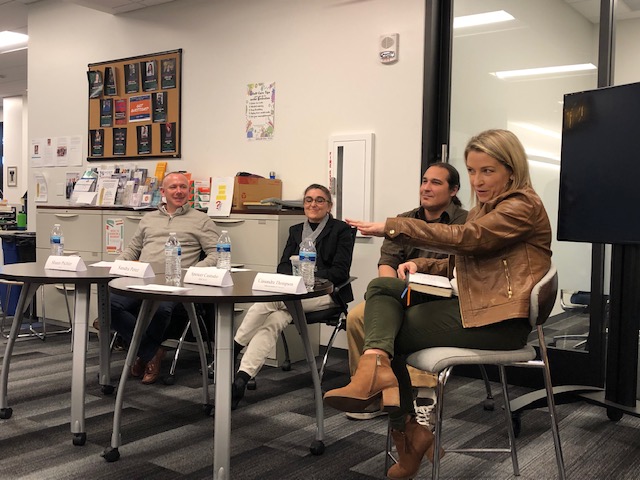 After months of build up, today was the day.

Networking panel was a go.

Not even hail could keep me out of Fullerton this afternoon, where I finally got to follow-through on officially adding event planner onto my résumé (though I already technically did weeks ago).

I’m serious. It hailed in Southern California. An event so crazy that I scoured my car to find evidence of it once I got to campus.

It was straight up hailing at the entrance to the 91 during my commute today, and luckily a little bit of ice stayed behind so I can prove I’m not just making that up. pic.twitter.com/PnkplIfHyx

Don’t think I’ve seen ice fall out of the sky since Elementary School.

But that’s not the point of why you’re all here. You’re here to read my writing on how the event panned out — assuming you didn’t follow my live tweeting (or you’re reading this years in the future).

I’ve discussed my road getting here numerous times in the past, but for the sake of catching everyone up quickly: I became a University Honors Program Ambassador after not nabbing a space on the Advisory Counsel, as the Co-Curricular Coordinator wanted to put the creative power of all us interested parties to good use.

Since then, I’ve been meeting with the Coordinator, Tyler, and a fellow Honors Program student Melina, once a week to plan a panel about interdisciplinary networking tips to find jobs and make connections within jobs.

Today we finally got to take over the Honors Center on campus:

We’re about 30 minutes out from my #networking panel in the @csuf Honors Center! If you’re part of the Honors Program, come check it out and escape the rain.

Though if you can’t make it, don’t worry — I’ll be live tweeting some of the proceedings. Stay tuned! pic.twitter.com/cTTFtdnVmL

Unfortunately, the visual arts representative we invited got sick this morning and could not make it out. But she was gracious enough to send us documents with the kinds of tips she was going to share so we could lay it out for attendees.

Without her we had three speakers and a moderator, Cassandra Thompson — College Career Specialist from the Career Center.

Spencer, true to form, was late to the event because he was covering a story. Even hung out a bit afterwards to turn in his copy before we went out to dinner.

I’ll admit that I didn’t personally absorb a lot of what got discussed at the panel. I was too busy live tweeting.

But that said, I did get a lot of great tweets out of the event:

“For me, networking is, as a student, meeting with professionals who are doing what you want to be doing in the future,” @PichlerShaun said when @cassthompson suggested most students she speaks to think of the activity as just going to a mixer and exchanging cards.

“I would not have the career path I have were it not for people who were willing to help me. I’m thinking specifically of letters of recommendation… These connections that open up possibilities,” Perez said of how important networking has been to her career path. pic.twitter.com/QQ729gP3y7

.@SpencerCustodio said that in the news industry there’s no such thing, as more networking means more sources for stories and getting your name out there for different publications. pic.twitter.com/jtKOrR4GxU

It figures I could only really enjoy my own event through the lens of journalistic objectivity.

After the panel, Justin Gerboc from the CSUF Alumni Association gave a presentation on the Titan Pro Network — which is essentially LinkedIn but concentrated to CSUF alum: 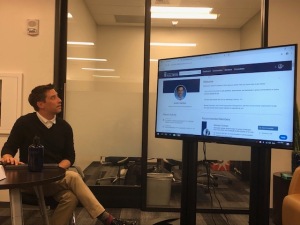 He was pretty great, too. Real nice guy.

The only other hitch was that I was a dolt and forgot the Fandango gift cards that were planned to be prizes for our networking practice activity at home.

I’ll be bringing the winners their prizes within the next week or so. It was simply yet another reminder that you always have to be ready to improvise, because something perfect on paper might have some last-minute problems in execution.

However, as far as I could tell the audience we had was sizable and decently engaged, in spite of whatever problems we had with late/missing speakers and delayed prizes: 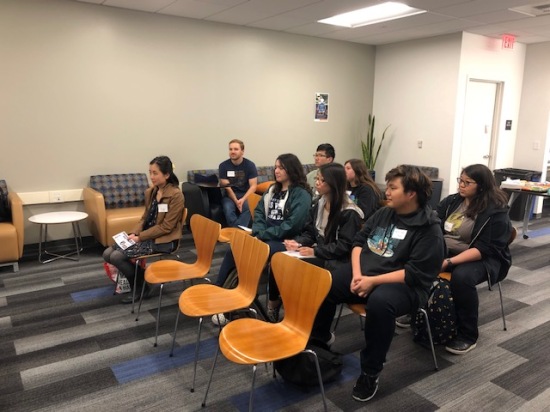 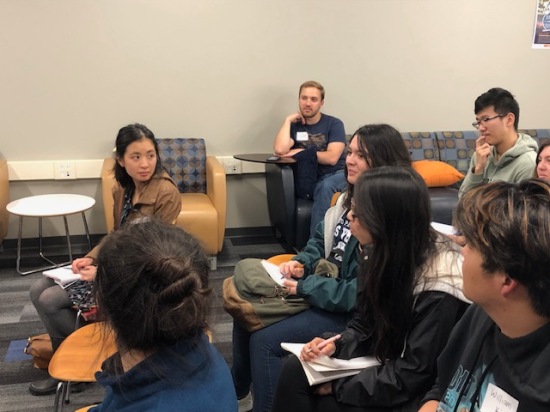 By the end of the afternoon we went well over the hour-and-a-half time slot planned out, and people were sticking around afterward to chat.

So… Yeah. I’d wager that my first ever adventure in event planning was some kind of success!

While I had a great time working with Tyler and Melina to set this whole thing up, I’ll admit that I’m glad it’s finally over. The Ambassador event was a decent time suck while I’ve been low-key stressing out about my Honors Project, Internship hours and midterms.

But hey, all that stress had to be worth it based on comments we got about attendees learning a lot.

That’s the whole reason we put this together in the first place.

So I’ll consider it mission accomplished.