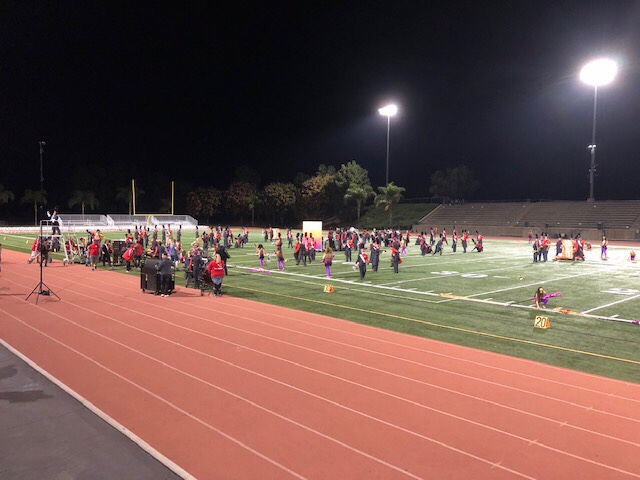 Tonight my family and I braved the smoke-ridden California atmosphere to head out to Irvine for the California State Band Championship semi-finals, where Alyson and the RUHS band performed.

I’m not sure whether it’s wrong of me to talk about that while people in areas actually ablaze right now are surviving a horrible tragedy? But the fires have been so intense that the South Bay has seen huge clouds of dust, and we were treated to a bright red sun on the way into Orange County.

So we might not have it as bad as somewhere like Malibu, to get images like this one I’ve seen circulating out of the LA Times:

An owl sits on the beach in Malibu as the Woolsey Fire approaches https://t.co/9D9meDcUL4 pic.twitter.com/TGMEhBg89i

But I still felt like it was worth mentioning.

Now let’s get into the meat of this post, shall we?

… Or at least, that’s what I would say. If there was some to get into.

I’m caught in a bit of an awkward position when it comes to talking about this competition. It’s all about a number of marching bands from across the state coming together to perform musical and visual shows so they can earn a spot in the finals.

I don’t think there’s a monetary benefit involved? Unless you consider a school’s potentially increased willingness to fund an award-winning program.

The problem comes when that musical and visual performance is best captured on video, but we’re not allow personal video recording of the performances because the organization is doing “professional recordings” and wants you to buy their video.

I’m not sure I could feasible argue this is a professional venue, and I’d rather not deal with a headache if it turns out they’re the kind of organization that sues if you break the rules.

So brief pictures will unfortunately have to do.

Like this one I got out of the performance by Troy High School:

The drum major actually did something unique by wearing that cloak and performing the prologue ballet for their show on that guitar there.

It was a bit goofy because the whole thing was leading up to a fantasy love story. But it was different and I appreciated that.

Of course I also tried to get Aly’s band performing their show Imagine, which is a somewhat bizarre blend of John Lennon’s “Imagine” and “Pure Imagination” from Willy Wonka and the Chocolate Factory.

Ironically relevant to me this semester if I hadn’t made that obvious enough already.

However, that’s about as exciting as I can get with this whole experience.

So I figured I would harken back to an older post I did and talk about more strangely specific video game-related associations I’ve had thanks to this competition.

The drive out brought back a memory from over two years ago. Way back to those days when instead of trying to do daily posts, I just wrote about a few things of interest whenever they came up.

Like brand new details about the as-of-yet released Pokémon Sun and Moon.

Boy those were the days, weren’t they? Everyone was so eager to eat up each and every little detail they could about the much anticipated Generation 7.

I miss that kind of game hype.

But now I’m getting sidetracked. All I wanted to say was that the drive reminded me of writing this blog post, specifically the Type: Null portions, in the car.

Which in turn drudged up the chunk about Tsareena and Bounsweet that I wrote in the stands that night.

That’s not where my gaming-centric connections end, though.

The competition is taking place at Irvine High School, where we’ve been here for a different band event in the past.

When we were here last it must have been a few years ago as well, because I distinctly remember playing Fire Emblem Fates: Birthright at the time. In fact I can do you one better and pinpoint the exact mission I was struggling through.

Mitama’s unlocking mission: Paralogue 12, as I looked up.

However… Just talking about that reminds me that I keep putting off that Fire Emblem Heroes post, which is focused on Fates characters.

So I’m going to try and cut my losses by wrapping things up here.

Would only be right to do so with the results. Aly and the RUHS band got fifth place, so they are going on to the finals. Because the top six teams make it through.

I guess here’s to next week when I’ll be doing this all over again!

A few days ago, a number of images have been leaked from the upcoming issue of CoroCoro magazine, showcasing a few new evolutions and a new Alolan Form Pokémon.  Then, following those leaks, we were treated with a brand new video, showcasing those new Pokémon we’d seen in the leaks and more!