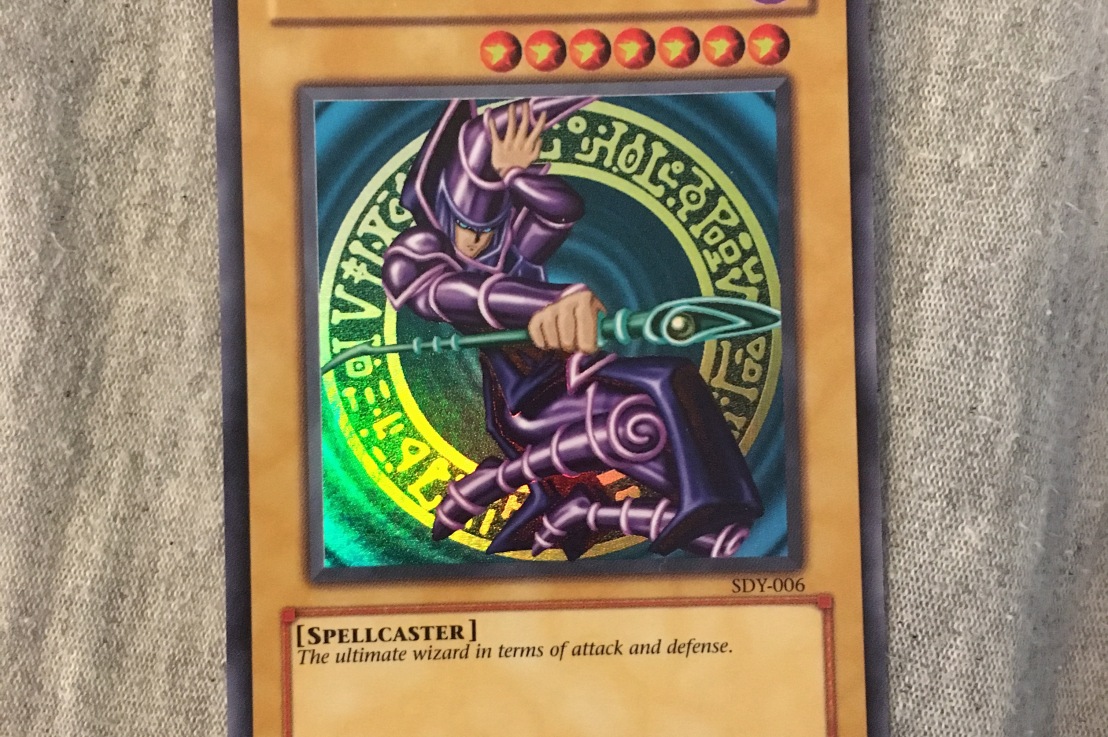 I haven’t been feeling so hot today, so most of my morning and afternoon has been spent sleeping.

However, the part of my day that hasn’t been spent sleeping (or writing this, to be fair) has been spent taking a little trip down memory lane. After getting my friend addicted to Duel Links – you’re welcome by the way, Sam – she dug up some of her old physical Yu-Gi-Oh! cards.

So I did the same thing:

Turns out these things weren’t quite as deeply buried in my closet as I thought they were. Though clearly I was not all that organized when I played Yu-Gi-Oh! some time ago, as I left the cards in my box in utter disarray.

Obviously that meant it was time to spend the next hour or so looking through what cards I have and organizing them for potential future use.

The first step I took when approaching the problem of sorting such a large, disorganized collection was splitting them into cards I recognize from my time playing Duel Links vs. cards that were completely new to my current understanding of the game. 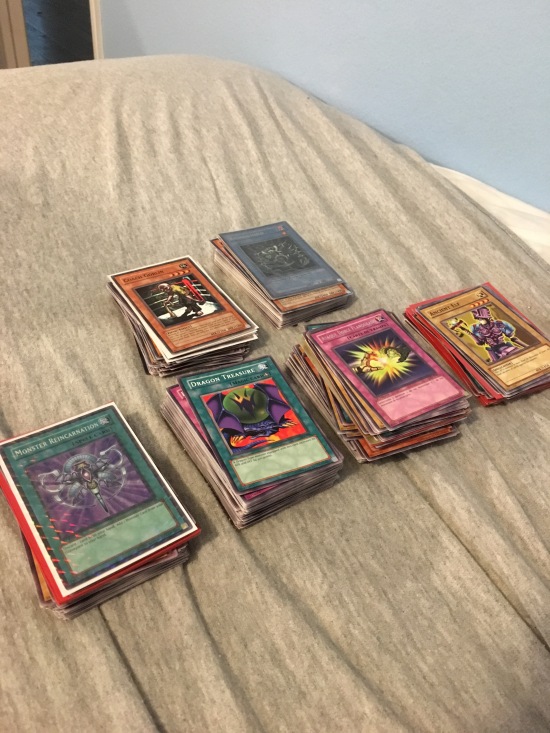 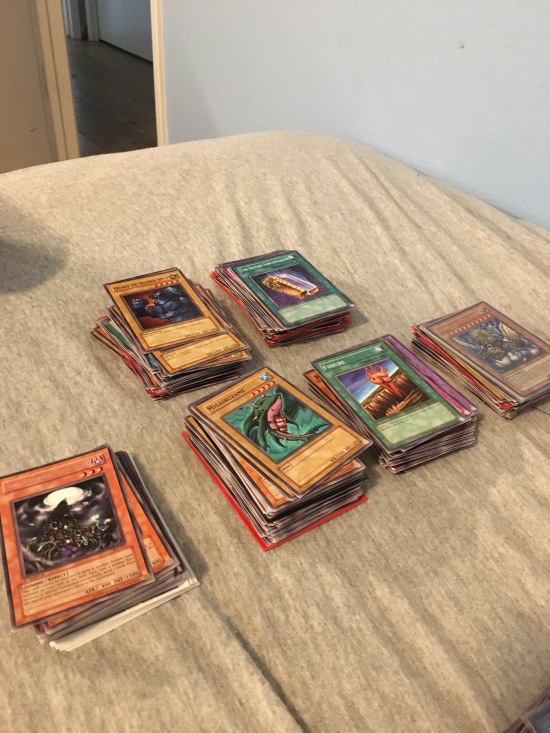 This first step was eye-opening in a number of ways. For one thing, it helped to show me just how many cards I own – which is way more than I expected honestly. I know I was really into the cards at one point, but I didn’t realize I spent this much money buying packs and such.

Going through each and every one of the cards I own also gave me a bit of a deeper appreciation both for Duel Links and for the time I spent playing the game as a kid.

When I was younger, I collected Yu-Gi-Oh! cards but honestly never had any idea how to play the game. Outside of watching the original anime series or playing what I remember to be a dumb Yu-Gi-Oh!-based game for the Gamecube, I never spent too much extra time actually learning the rules for how everything works in the card game.

In fact, I distinctly remember having a Yu-Gi-Oh!-themed birthday party one year in elementary school where my friend Chris Beattie brought over some instructional video so my group at the time could watch it, learn the game and actually play with our cards the proper way.

We never did, since I also remember the rest of us rejecting the idea in place of playing more of that dumb Gamecube game. Part of me wonders if I would have stuck with the game more consistently if we had learned way back then, but I suppose that delves into endless Butterfly Effect territory that I’m not really here to analyze.

Now that I do understand how the game works, I honestly appreciate the sheer complexity of how everything works so much more. There are plenty of cards in my left-hand piles that I actually use on a daily basis in Duel Links, so knowing that I had them way back when I didn’t even understand the rules is kind of mind-boggling.

On top of that, the size of my collection on the right-hand side, all the cards that aren’t currently in the mobile game, blows my mind just in that there’s so much more potential for the game to grow. I’m sure I don’t even have a decent percentile of all the cards that have ever been put into production, and in a way that makes me excited to see more cards added to the mobile game so I can learn how they all interact and create cool decks.

Once I finished separating my cards once, I decided to do it a second time into six different categories: Normal Monsters, Effect Monsters, Ritual Monsters (and Ritual Spells), Fusion Monsters, Spell Cards and Trap Cards.

Oh, and I also separated out the instructional manuals and play mats:

I could have been way more specific and deep with my divisions, splitting up the monster cards by type and attribute or splitting up the spell cards by type, for example. But I’m still pretty tired, so I decided not to go quite that deep. Maybe I’ll take things a step forward in the future.

So for now, I’ve left things at this:

Major categories with brand new dividing cards. Far more pleasing to the eye and easy to identify than what I had originally. Originally, the best I could comprehend was that Sanga of the Thunder was sitting on top of everything else on the right side.

Real helpful, past me.

Speaking of Sanga of the Thunder, one thing I found while sorting through my cards was that I seemed to be ready to play the Paradox Brothers-themed deck well before I knew that was a themed deck to play.

The only thing I’m missing is a Gate Guardian card. If I had that, I could probably build a pretty cool deck with these cards and whatever else I have buried away.

This isn’t the only cool set of cards I was able to find in my collection.

Here’s some Red-Eyes and dragon-related cards that I was able to find. Red-Eyes Darkness Dragon was actually one of the first things I saw, and I’d be lying if I said I wouldn’t be willing to shell out money to get copies of it in Duel Links to use for myself. It looks absolutely amazing.

I also wouldn’t complain about having three copies of Stamping Destruction in the game, since it’s a pretty hard to get Ultra Rare card.

But oh well, I’ll get there eventually. In the meantime, check these out: 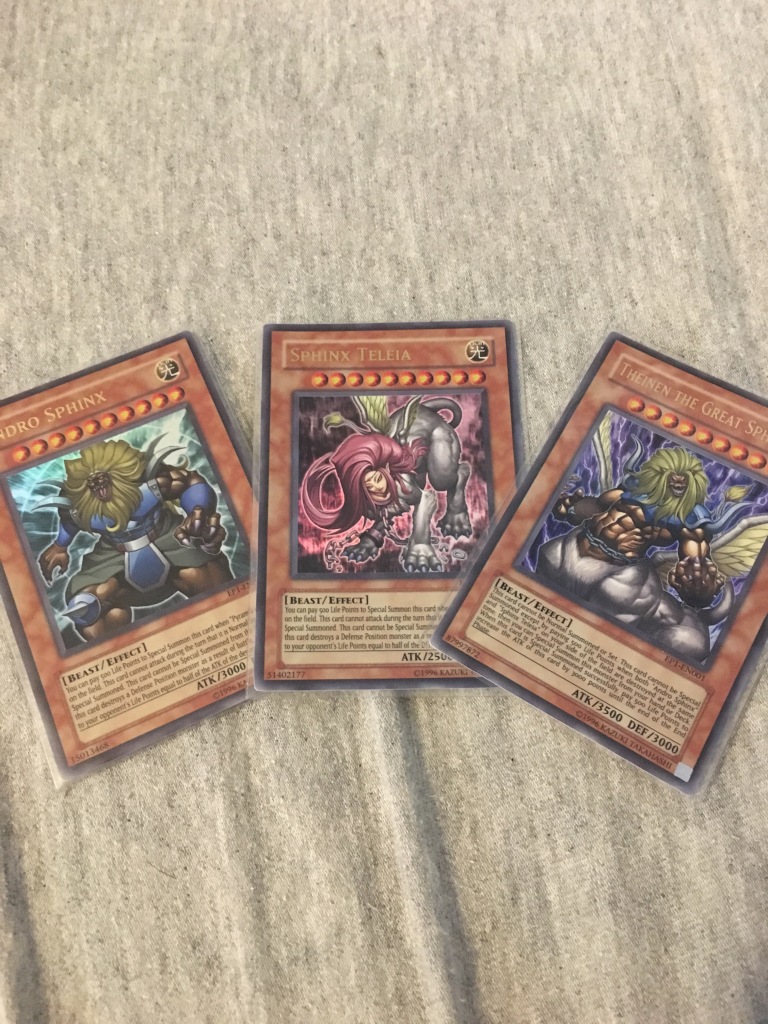 These three Sphinx cards look wicked and have some crazy effects. These three and the Red-Eyes Darkness Dragon are definitely the cards I’m really hoping these show up in Duel Links so I can use them. 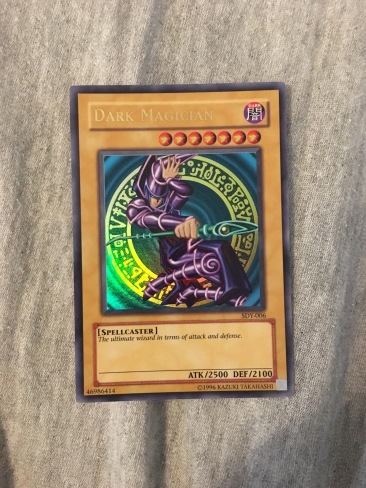 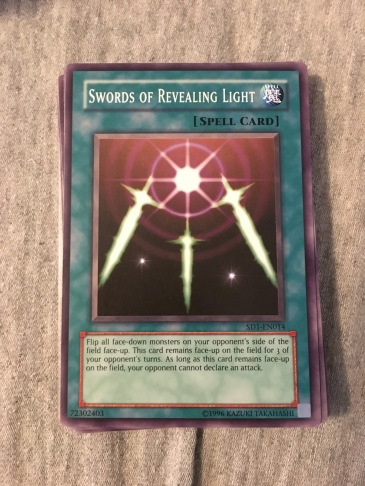 A bunch of the cards I found have strong sentimental value just from being iconic in the anime. Swords of Revealing Light definitely hit me the hardest, though I can’t deny that the old school art for Dark Magician is seriously wicked.

You could apparently get this old version of Dark Magician in Duel Links if you were playing at a certain point, but I was not playing at the time. So… Oh well. Missed opportunity for me there I suppose.

Also, while we’re on the subject of those cards, I apparently have a wide breadth of cards Yugi Muto used: 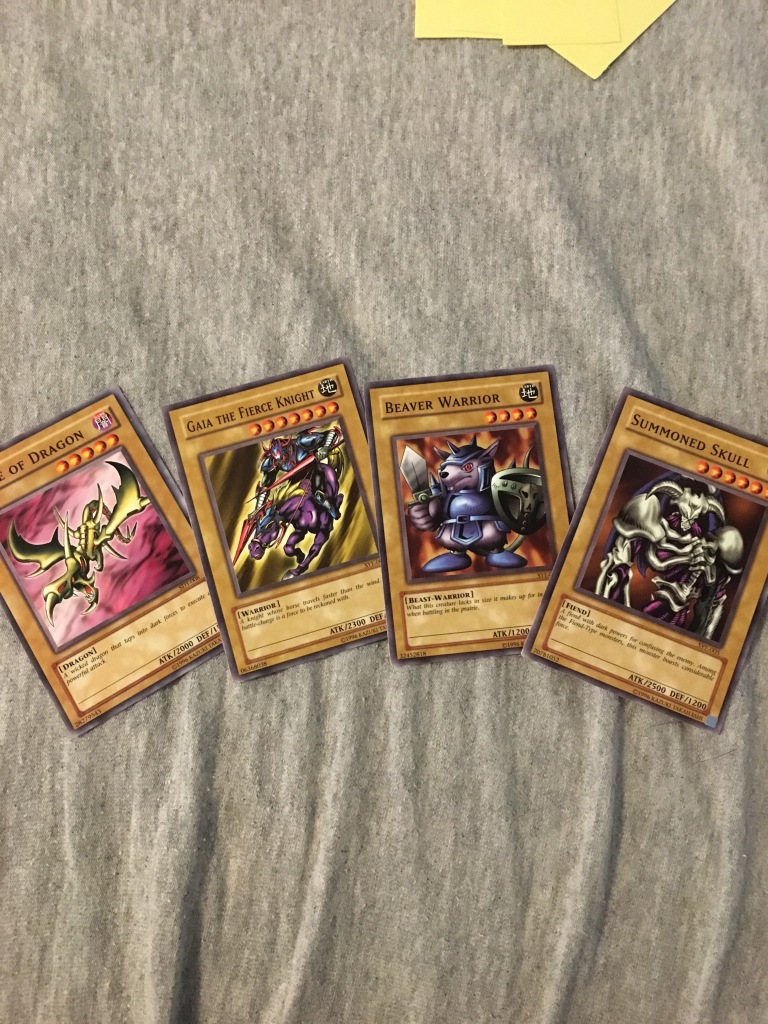 I build all sorts of decks with these cards nowadays, so it ties into the idea of knowing I had them way back when and respecting them that much more now. 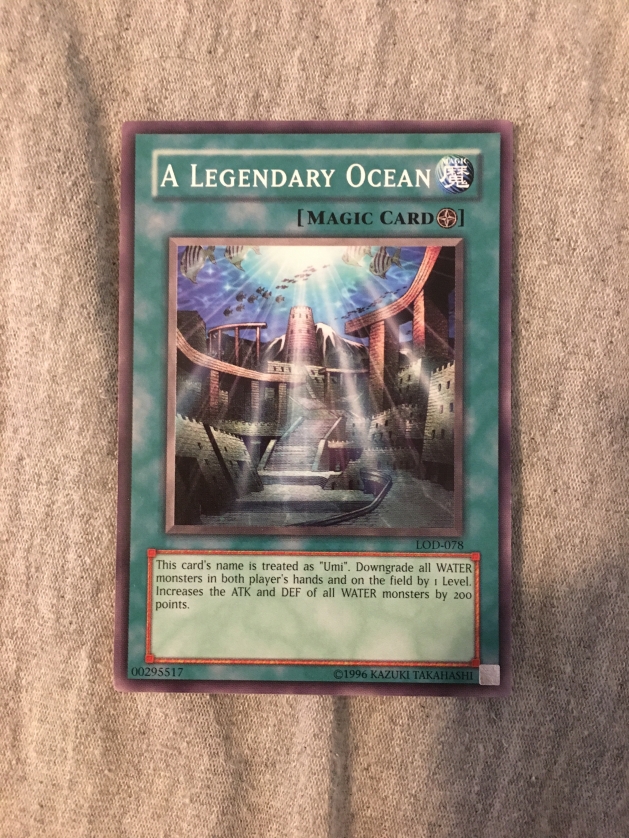 When I found A Legendary Ocean in my collection, I couldn’t help but laugh hysterically. The deck I’m showing on the right was actually just built yesterday when I began to grind Mako Tsunami up to lv. 40. The timing of that specific card showing up right after I pulled together something to showcase that card is just too perfect.

Some of the more interesting cards I have are those printed in foreign languages.

In other interesting card print differences come these ‘magic’ cards: 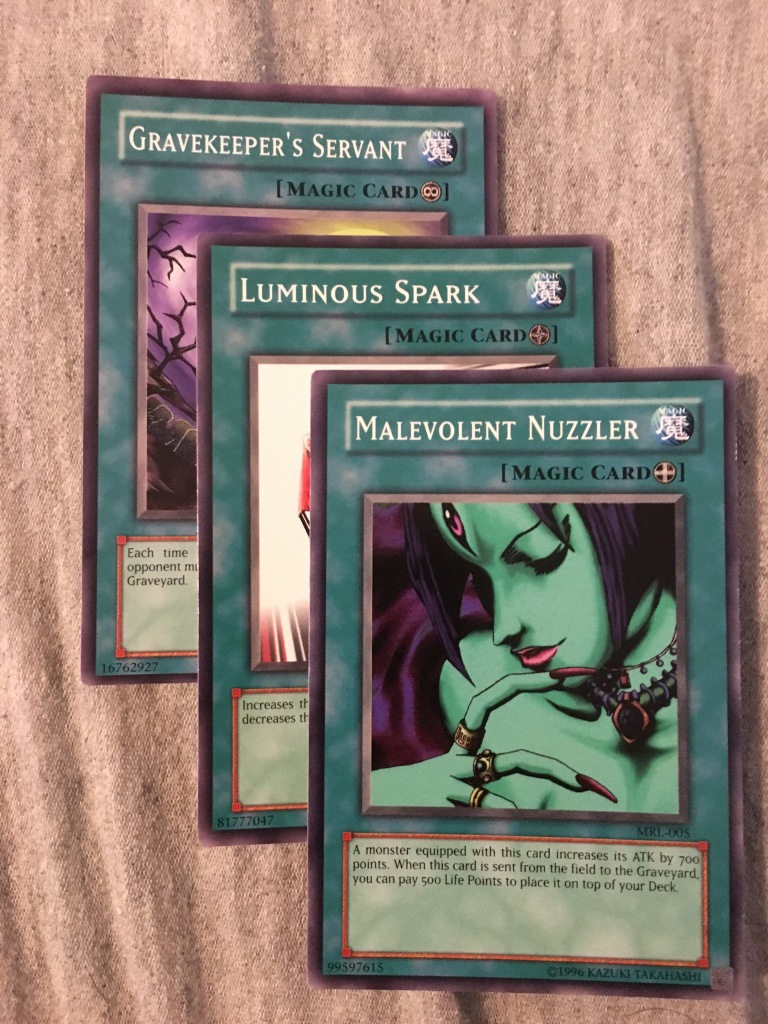 I’m so used to just calling these ‘spell’ cards that seeing ‘magic’ instead really caught me off guard. I suppose that’s just what they used to be called or something. Having the cards written like this is probably more valuable as a result, I’d think.

Also speaking of unique, valuable cards, I had a good set of highly coveted prismatic print cards hidden away just ready to be rediscovered.

The title for my favorite prismatic card definitely goes to Nightmare Penguin.

Seriously, just think about it. First things first, its name is Nightmare Penguin. That’s incredible in its own right. The art doesn’t disappoint either, evoking images of Oswald Cobblepot in the best possible way. On top of that the card has a pretty cool ability and nice defense for a four star monster.

So basically I lied earlier when I said I just wanted to see the Red-Eyes monster and the sphinx monsters in Duel Links. I want to see Nightmare Penguin get added too, Konami.

Or, at least, they were some of my most prized possessions at one point in time. I remember shelling out extra at card shops to get these and having week-long arguments with my Yu-Gi-Oh!-playing friend group over whether or not they were legitimate or not.

I always adamantly argued they were real, of course.

However… Now that I’m older and looking at them next to the rest, I have to admit that they look pretty fake. It’s a shame when considering how much I stood by them growing up, but honestly it’s not all that unexpected.

Oh well, either way I’ll still have the memories with these being wicked cool. They still look pretty rad too, so I’ll be happy to show them off for the sake of those memories at least.

I know this medium of talking about things after the fact with screenshots and some text isn’t necessarily the most dynamic way of experiencing these sorts of things, but I hope you all enjoyed going through these old Yu-Gi-Oh! cards as much as I did! Obviously I didn’t show off all of them, since that would probably take a few years, but the highlights are great either way.

Since I’m so into Duel Links and talk about it here on occasion, I figured these real card memories would be a nice thing to share on here as well.

Even if my rambling might be a little more incoherent than usual since I’m not feeling great.

Just in case it did bug some of you, I’ll leave things off on this note. Some of my favorite ‘funny text’ cards:

Oh I’m sorry, what was that? You say there was a piece of Exodia slipped into that small slideshow somewhere?

A piece of Exodia not chucked into the ocean by Weevil Underwood?