I didn’t exactly have any grandiose plans for a blog post today in the first place, but I wouldn’t expect this one to be super long or involved anymore if I were you.

See, I spent most of the day at home today, but a lot of it was while indisposed. Cleaning the house and sleeping primarily.

Sleeping a lot. I mentioned starting to be sick during my Nintendo Direct post the other day, and since then it hasn’t exactly gone away. If anything it’s shifted from being more of a stomach bug to a head cold, and I’ve been laying around coughing with a sore throat for hours.

As a result, earlier I laid down to take a two, maybe two-and-a-half hour nap. Wound up sleeping closer to five hours.

Lost a hell of a lot of time to that, which is why I’m just kind of making it up as I go along now.

Figured if I was going to talk about anything, it would be the only not sick-related thing I did: Playing some Monster Hunter.

Because what else do you do when you’re laying down but not sleeping yet.

I’ve been having a blast with the game so far, and having to play it around school starting up actually made it more feasible to spread the content around. There’s a whole lot of it, and I’m maybe just finishing up the first third of the game — if you split it between low-rank, high-rank and G-rank hunting.

In celebration of finally breaking into high-rank, I figure why not share this cool new armor set I finished? In part because I honestly don’t use my Switch photo taking ability enough. 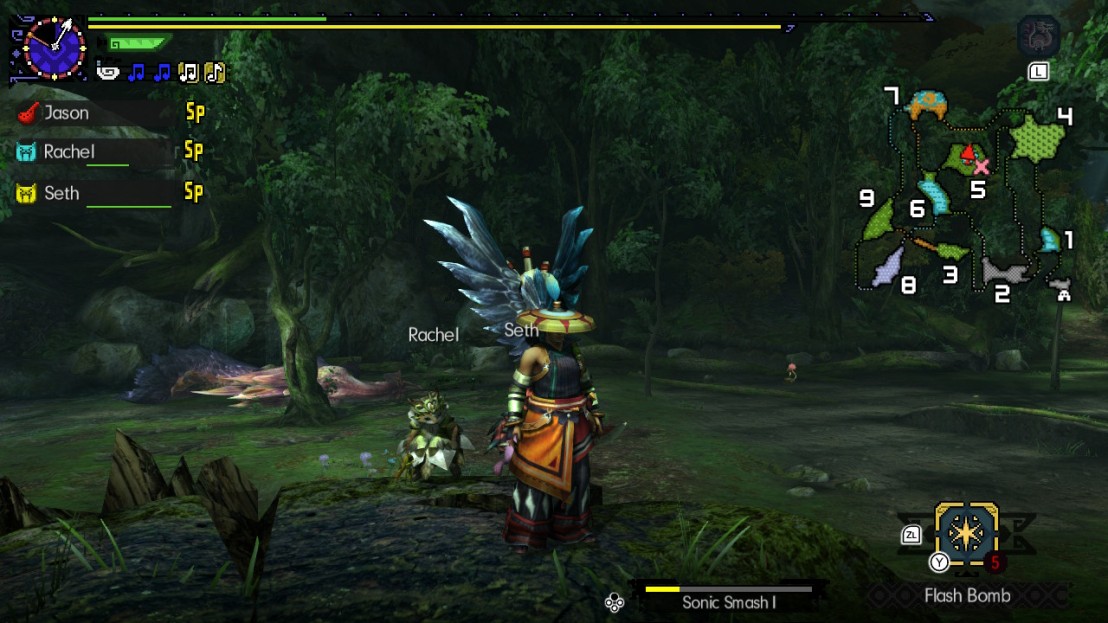 This cool ninja outfit is the “Yukumo Sky” armor. Named after the Yukumo Region and made with hardwood from the nearby Misty Peak, this sweet gear has been outfitted with a number of decorations so that wearing it grants me ~40 percent higher critical hit chance and longer invulnerability periods when dodge rolling.

Paired with the Hidden Harmonic, a Hunting Horn made from the elusive Nargacuga, I have 70 percent higher critical hit rates and songs that provide Attack, Defense and Health buffs to my allies.

It’s one of my favorite combinations so far, a straight upgrade from the critical hit-boosting Shogun Ceanataur armor I used this horn with previously.

This kind of equipment set construction is arguably my favorite part of Monster Hunter, because it’s so much fun to beat down an increasingly large collection of complex monsters to see what sort of cool stuff can be done with their armor pieces.

However, another one of my favorite things in Generations Ultimate is just how darn pretty it looks, especially coming off of the 3DS generation.

I take some glamour shots once in a while, check some of them out:

There’s so many opportunities to do this and I love it.

Really I love this game a lot so far. After pouring so many hours into Generations on the 3DS, it’s cool seeing all of the new stuff that has been added into this version. I’m about three weeks in and still unlocking new locales.

But that’s honestly about all I can think to write right now, because I’m still dying. Honestly I just wanted to get something out on my blog today.

So hopefully you enjoyed this goofy little thing. Maybe I’ll eventually come around to making more professional equipment set display posts one of these days.

If so, you can thank this post for being a trendsetter.