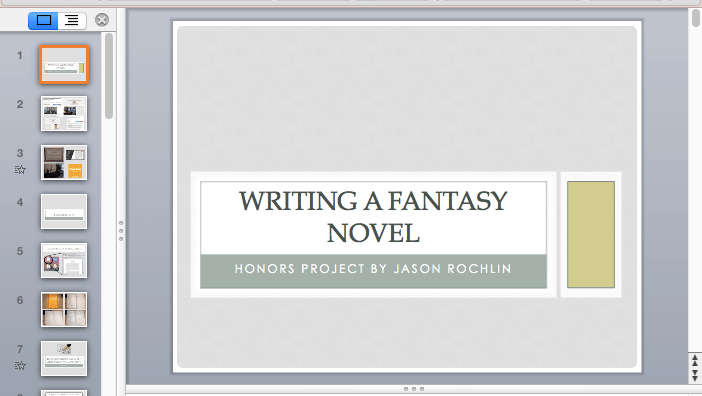 Like I mentioned in my post showing off the character sketches from my novel-in-progress, this Friday I will be presenting my Senior Honors Project at the Honors Project Interdisciplinary Conference.

We got the official email with the final schedule brochure and everything. It’s happening.

Not only is it happening, it’s coming up at full speed.

So most of my day has been spent preparing the Powerpoint I’ll be using. A few weeks back the Honors Program Director Sandra Perez asked me to help another student who wanted to do a creative writing project, as she said the pre-preparation I’d done was impressive.

That experience wound up being my lightbulb of inspiration. I realized that my project was better grounded in a Pre-Preparation of Rites than “I wrote part of a book.”

By the end, I’ve come to find that a whole lot of preparation was involved in my novel.

Most of it is stuff I’ve discussed on the blog before. The character sketches, map-making, research into Dungeons and Dragons and plotting out the story among them.

But then there are more exotic elements to the process as an overarching narrative — Such as my inspirational material, John Scalzi’s Redshirts and the prep work on earlier creative writing pieces.

And let’s not forget the elements I have yet to talk about.

Notably backend research into creating believable cultures for my fantasy world. I asked my old professor Paulo Simoes for some advice because a lot of his background involves researching ancient societies, figuring out how they tick.

He recommended trying to model my fictional cultures and the events that characterize my world off of real-world societies.

After all, he says it’s a successful strategy for shows like Game of Thrones, which modeled its famous Red Wedding scene after massacres in Scotland.

Game of Thrones is in vogue to reference right now, yeah?

I’d hope so. Because I’m more than happy to capitalize on that, even though I haven’t personally watched the show.

For my project, however, I am not utilizing Game of Thrones in any capacity. Rather, I’m using “The Story of Civilization” collection of historical novels to base parts of my book on periods of history. As suggested by Dr. Simoes.

Along the way, I’ve been trying to craft the oral part of the presentation: 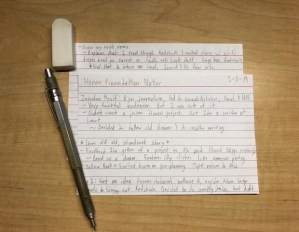 I have 15 minutes to present, and then I’ll have to be ready for five minutes of audience questions. I’m hoping I’ll be all put together and confident by then.

While getting prepared, I took some time off with my Mom to go out and put something sweet together with the drawings from Elizabeth: 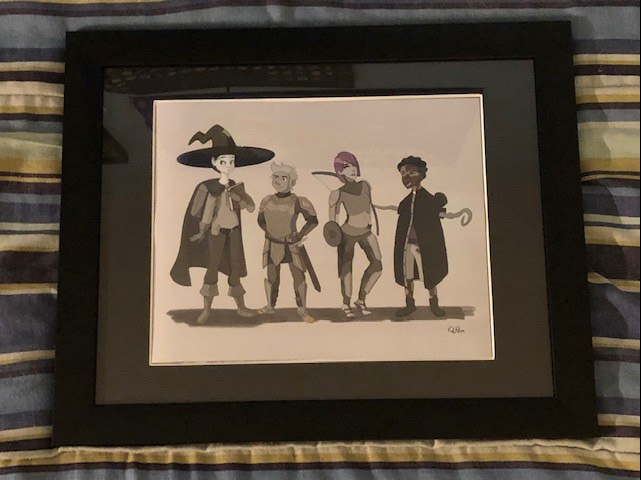 Just a little something to help remember the project by. Doesn’t it look nice?