A game series like Pokémon, in which there are over 700 individual characters to choose from when pulling a team together, really lends itself to choosing favorites.  Everyone who has ever played a Pokémon game undoubtedly has a favorite monster, be it for their competitive viability, the strength of the character building and lore around them or simply the nostalgia factor.

Personally, my absolute favorite Pokémon of all time is the Hoenn native Psychic-type Gardevoir for a combination of all three. A powerful and feared hyper voice using Mega Evolution with a newly adopted Fairy-typing, a wonderful design alongside descriptors about emotional closeness with the its trainer and a consistent reminder of my childhood days visiting my Grandparent’s house in Florida, playing Pokémon Sapphire and catching a Ralts on Route 102 that would stick with me for the entire journey.  I always taught my Gardevoir the move Shock Wave in those days.  Not entirely sure why, but I did.

While I don’t know exactly how many Pokémon will be added to the National Pokédex in Generation 7 (As I’m still avoiding the data mining spoilers), I’m going to assume that the total number of  monsters will probably top 800 by the time we’ve counted through all of them, from Rowlet to the mysterious Crystalline Prism creature we were shown not too long ago and beyond.  That adds a lot of new favorite Pokémon for both series veterans and newcomers to choose from.

In that same vein, I’ve seen many people putting together videos and lists of what Pokémon they’ll be using during their initial journey through the Alola Region.  I did the same kind of forward thinking when X and Y were on the horizon, and I’ve honestly been doing the same thing while Pokémon have been unveiled over the last couple of months, so I figure why not talk about them here?

I actually do team building quite often, both for casual gameplay runs and for competitive team planning, something I started to do a lot more in Alpha Sapphire.  Typically, I try to follow some personal rules when doing so for either kind of play:

These rules are more my own attempts to make my life harder on myself, honestly.  Just choosing any Pokémon willy-nilly would be too easy, so it’s more fun to set up rules for myself as a way of encouraging more critical thought as far as building things ahead of time goes.

With that said, and without further adieu, I introduce the six Pokémon that will be accompanying me during my first adventure in Pokémon Moon.  Under this read more, naturally.  Could be some spoiler-y stuff for people avoiding any and all information, and  this post is already taking up a lot of space.

END_OF_DOCUMENT_TOKEN_TO_BE_REPLACED

With all that silly real-life exposition out of the way, let’s get into the meat of the more interesting video game news of the day.  As if to celebrate my newfound (but short-living) freedom, a brand new Pokémon was unveiled at Gamescon 2016, so let’s check it out!  Once again, it’ll all be under the cut for people looking to avoid any sort of spoilers.

END_OF_DOCUMENT_TOKEN_TO_BE_REPLACED

Bit of a smaller Pokémon information dump today than we’ve been getting lately, but this new creature is an interesting new reveal to say the least! 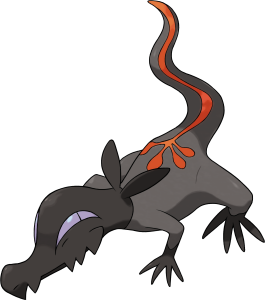 Say hello to Salandit, Pokémon’s first fire/poison-type.  Revealed at Japan Expo with this trailer at the helm, this little salamander bandit has quite a few interesting things about it.    First and foremost would be it’s typing combination of course, being a totally new and unique one.  It also has a pretty cool look to it, reminding me of a somewhat cartoony depiction of a French bandit or pirate from some source I can’t really remember off-hand.  Also, if you watch the reveal video, it honestly has an infectiously funny sound.  I wish I could have it’s noise as a ringtone, it’s hard not to smile when you hear how goofy a menacing laugh it was given.

However, probably the most interesting thing about this guy is it’s ability: Corrosion.  Corrosion allows Salandit to poison /any/ Pokemon, including other poison and steel-types.  Considering steel-types haven’t been able to get poisoned since their inception in Generation 2 (or technically fully implemented in Generation 3 according to the bulbapedia page), it’s pretty nuts that we’ll be able to poison them now.  It’s especially poignant considering there are probably a few really bulky steel-types out there that could get taken out a lot easier by a Pokémon that can toxic them for scaling damage before dishing out some STAB fire-type attacks.

I also figured I would share Salandit’s official description from the Pokémon website, since it’s honestly kind of insane in it’s own right.

“Salandit emits toxic gas, together with flames, from the base of its tail. This poisonous gas has a sweet smell, and anyone who unknowingly breathes it in will become dizzy. Salandit is not a very powerful Pokémon, but its cunning nature allows it to battle fiercely by throwing its opponents off balance. Salandit females not only release toxic gases, they can also emit pheromones that attract males of all species, including Pokémon and humans. Inhaling these pheromones may cause opponents to be controlled by Salandit’s will.”

Yeah, this little guy not only decimates steel-types, it’s also apparently able to control people’s minds.  Sure that’s technically only lore based for now, but who knows, we could be seeing something to that effect in it’s move pool somewhere.

That’s about all I’ve got for now, but I have to say I’m actually pretty excited for this new Pokémon!  It’s interesting in quite a few ways and really seems like a great new addition to the cast.  Also, between Salandit and Komala, there appears to be some kind of focus on messing around with status ailments coming for Gen 7, and I’m more than up for exploring it.  It could mess with the competitive field a bit, and from what I know about the current metagame that might not be such a bad thing.

Lemme know what you think about Salandit, it’s general collection of things and how it fits into the pool of new Pokémon we’ve been getting.  Also, let me know how you feel about the direction these new Pokémon games seem to be heading in with all of these unique abilities and such on the monsters we’re getting, I’m interested to know how you feel about anything and everything Pokémon related!