Welcome to another blog post focused on aesthetic things.

Don’t know why I’ve been doing so many of these recently, but I’ll hedge my bets and blame the new Instagram account and my Visual Comm class for both making me focus on the appearance of things in the world around me.

Today that happened to come into play when I went out for pseudo-lunch/dinner with some members of the Boom crew as a mini-gathering before we host something larger later on in the semester.

Dr. Sexton brought us to a place down by Fullerton College called The Olde Ship.

If this picture alone doesn’t suggest it, The Olde Ship is essentially a British pub smack dab in the middle of Old West Yankee country. It’s apparently a small chain in Orange County, if you can count two locations as a chain restaurant, but I probably wouldn’t.

Because the place definitely feels like a pub you’d find in some small village in England somewhere.

Not that I’d know what that feels like to be fair, as I’ve never been to England before. But it seems like exactly what I’d expect based on popular media. Like the Kingsman movies.

We all know that popular media is a good barometer of what things are like in real life, right?

I suppose that’s as much of an interesting observation as any, the fact that I implicitly gauged a location’s authenticity by the aesthetic I’ve noticed in pop culture. But to be frank that’s not what I wanted to touch on with this place.

Nor did I want to touch on the corned beef sandwich I had. Except I will briefly just to say that they made a pretty darn good corned beef sandwich. Not quite as good as my parent’s corned beef and cabbage, but I didn’t want to go down this route in the first place because I’m not fully prepared to tackle the ‘home cooked meal vs. restaurant quality’ debate at 8:45 p.m. on a Monday night. School has me too wiped for that.

Instead I wanted to talk about how bizarre it was seeing that traditionally British-style aesthetic intermingling with, of course, Halloween decorations. 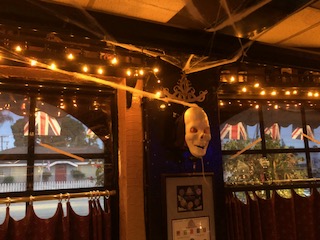 Yeah the whole place was covered in fake skulls and cobwebs and fancy little pipe cleaner spiders. All of those kitchy Halloween decorations that suburbanites love to coat their houses with as October 31st approaches.

I can’t say it wasn’t cute to see that kind of decor in such an unexpected place. But I do feel like I have to say that it was unexpected to see those two aesthetics clashing together.

Now granted that may, once again, be a problem of my own sheltered sense of scale. Maybe there are tons of pubs over in ye olde England that love to decorate their things with cliché, kitchy Halloween stuff. It’s just not the kind of thing I’ve ever personally heard of in my limited, media-driven understanding of the world.

In a way it’s kind of cool that I got to take that interesting observation out of lunch/dinner. On top of the wonderful company, of course.

But maybe there is some bigger, underlying point about media representation and worldview. I’m just frankly too tired to know whether I should dive into it any further or if I’m just crazy and rambling about nothing.

Which, to be fair, is a very strong possibility.

Before I signed this one-off, I did want to mention that my focus on aesthetics in these last two post was actually for a more substantial purpose than just corruption by my liberal college education or whatever.

While taking pictures for my Visual Comm aesthetics assignment, it really got hammered into my head that iPhone photos are way huger than I thought they were. Which, in turn, led me to realize that the reason why I’m filling up all of my media space here on the blog so quickly is because I almost exclusively use iPhone photos.

So taking pictures of buildings at Pasadena City College yesterday and of this pub today were somewhat underhanded attempts to practice a new form of throwing pictures up on my posts without having them be humongous messes I have to deal with down the line.

If all the pictures I’ve taken seem smaller than usual, that’s why. It’s probably going to be the norm from now on.