Originally I was going to skip writing a post tonight because I’ve been busy with chores, homework and cleaning for the imminent arrival of my Grandma this week — plus the gym as an added bonus, but I just couldn’t get this out of my head.

My family was over at the Century City Mall for a solid chunk of the day to hit up a couple stores (which, fun fact, is the same place I was when I wrote my Summer 2018 Initiative post), and at one end was this place: 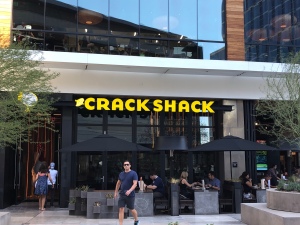 The Crack Shack. A fried chicken and egg-themed restaurant as I found out through rudimentary research.

We didn’t actually eat at this place so I can’t pass any sort of judgement regarding how good the food is. I’m purely here to pick on the name.

Honestly just thinking about that alone made me laugh enough that I felt it was worth going back to take a picture as we were moving on. But then I thought about it more…

And I came to the realization that Crack Shack isn’t even the weirdest egg-themed restaurant name. Because eggslut is a thing.

These kind of viral or gag-based named websites became a very interesting subject to me this afternoon after thinking about these places.

I personally would not want to eat at a restaurant called Crack Shack, for instance. Mostly due to that drug association that I can no longer delink in my head. I also don’t know that I want to eat at eggslut for essentially the same principle, even though I’ve heard the food is really good.

So I can’t help but wonder whether or not trying to make a viral name is actually helpful for business.

On the one hand, there’s something to be said for the old idiom that any publicity is good publicity.

But on the other hand, you risk hitting a threshold where your name is so off-putting that nobody wants to visit after that initial media splurge.

I can’t say what that threshold would be, as some place like eggslut is a very popular place for a combination of its quirky, provocative name and (reportedly) good food, and if there are any restaurants that have been shut down for their overtly edgy name, I certainly haven’t heard of them.

That said, I suppose I’ll leave it here: If you know of any really bizarrely named restaurants (that have either survived or crashed and burned), I’d be very interested to hear about them.

I’d also like to know what you think the absolute threshold might be between a quirky, provocative name for a restaurant and something over-the-top.

So yeah, let me know somewhere on the Internet!

As an extra added bonus, while visiting a Blick art store on the way home, Aly and I came across this miniature T-Rex. 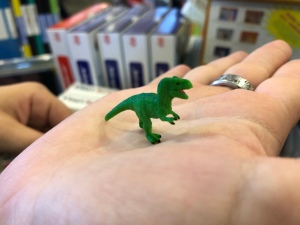 It was adorable and we got this great picture of it, so I wanted to share.

Hopefully it can help usher you all into a better night.