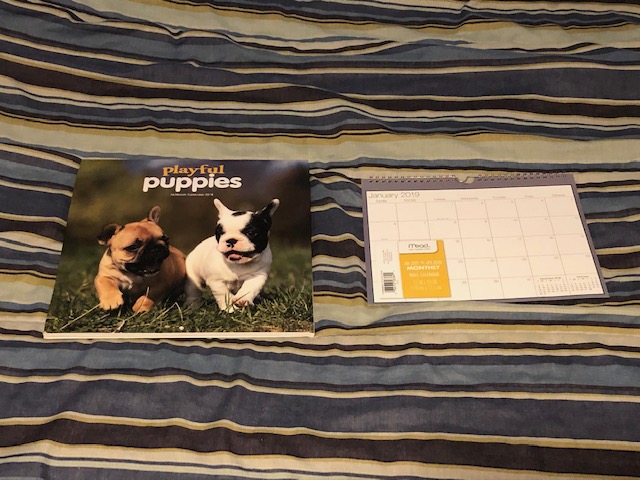 While today was a bit strange and didn’t exactly pick up until ~2:00 p.m. or so, when it did pick up it got fairly busy.

I’ve been continuing to schedule things for Gladeo, I got a piece to edit for Boom (which I still have to finish so I’m hoping to not spend a lot of time here <.< ), I continued to try to clean my room (without much progress yet — need to devote a whole day to it), I both dropped off and picked up Alyson from school and then after that we went to the gym together.

First time I’ve gone in a couple of weeks actually, as I was a little hesitant while sick. But I’m happy to say that my routine from before picked up just as well know.

So you know, hopefully that will make it easier to drop whatever weight I must have picked up from the holidays.

After we went to the gym, we decided to take a brief detour to a local Target so I could finally do what I’ve been meaning to do since the new year began:

I bought myself a new calendar. 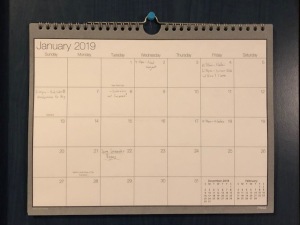 As you can probably tell from the Featured Image, I downgraded the flair this year. Instead of having adorable puppies to keep me sane in my darkest moment, I decided to get a much more clean, simple business-forward kind of calendar.

Definitely not because we only decided to go to one place and I picked out the cheapest option.

What would make you think that?

Okay, jokes aside, I did pick this particular calendar for a few reasons beside its price tag. Unlike my puppy calendar from 2018, this new one is made of paper rather than some kind of laminated plastic-y material. As a result I can write everything out on it in pencil rather than pen, meaning not only does my writing look better but it also won’t smear before drying.

Which yes, was a problem I actually had pretty often.

With a new calendar also means a fair amount of time spent going through each month and transferring over some important yearly dates. Notably birthdays and major school landmarks like starting and end times. But having the 2019 set also means I can start to fill in events and appointments.

Going through last year’s calendar to transfer dates over was pretty fun, actually. It reminded me of all the big events I took part in and made me excited to see more and more of the blank spaces get filled up this year.

Hell, I might even save my 2018 calendar for posterity.

… Though that does make me sound like Brett Kavanaugh. So maybe not.

Whether I do it or not, all I know is that for now my new calendar is put up and ready to take some dates: 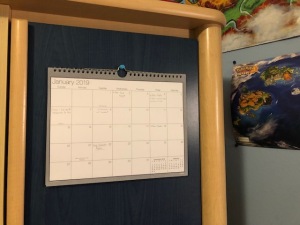 So hey, if you want to hang out with me anytime soon, now’s your chance to get on my schedule while it’s fresh and new!

Fun fact — the only other thing I could think to possibly talk about in this post was the experience of wandering Target in a post-gym exhaustion with my sister. 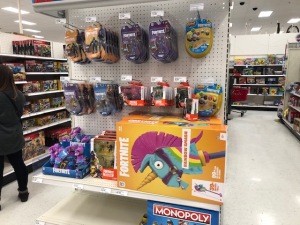 Don’t think it would be worth the trouble.

When I graduated from high school a few years back, my parents got me one of the most important, physical gifts with real-life practicality that I have ever received: 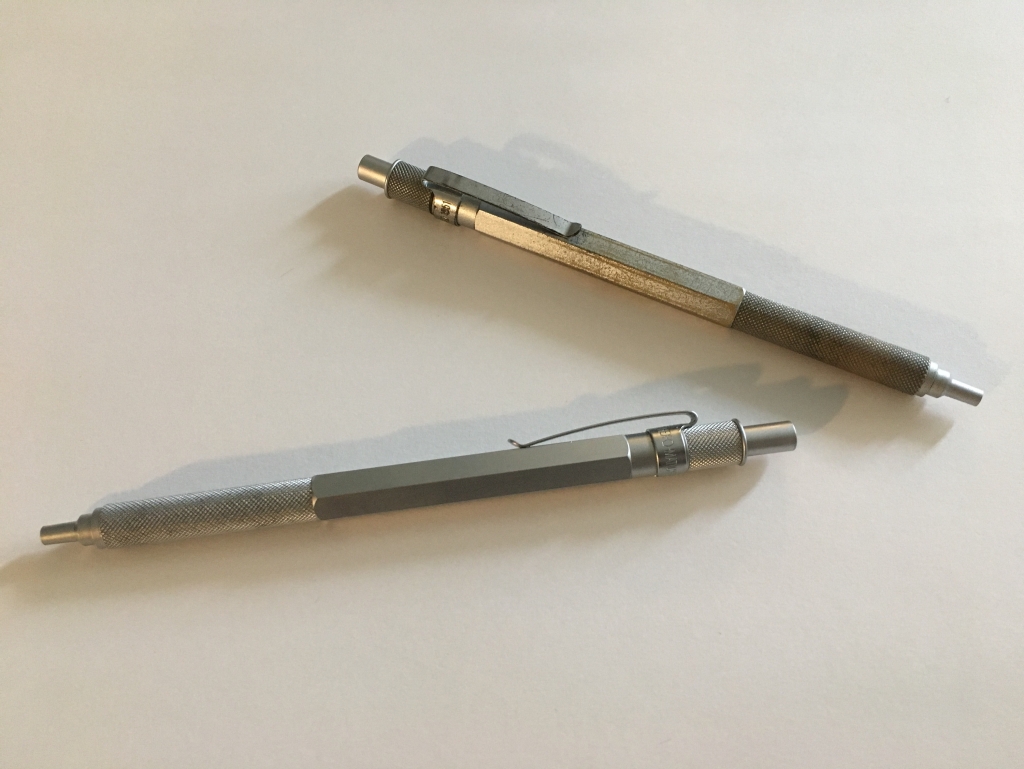 It seems a little bit strange to pick apart over 21 years of constant, loving support and choose something like this as an example of something I regard so fondly.

But it does make sense if you think about it!

As a writer by trade, there are few things more important than the right hardware. Notebooks, pencils, pens, audio recorders, etc. I quite literally live my life by these items through my college student/journalist career.

Add onto that a heaping dose of superstition by my allocating generous amount of credit for things like my grades into the old ‘lucky pencil’ cliché and you’ll be hard-pressed to find any of this stuff leave my side.

The thing that really stands out to me, however, is the dichotomy of the two writing utensils. Those differences are essentially what inspired me to write this silly little post.

Just a quick look up-close will show you why. This is the pen part of the set: 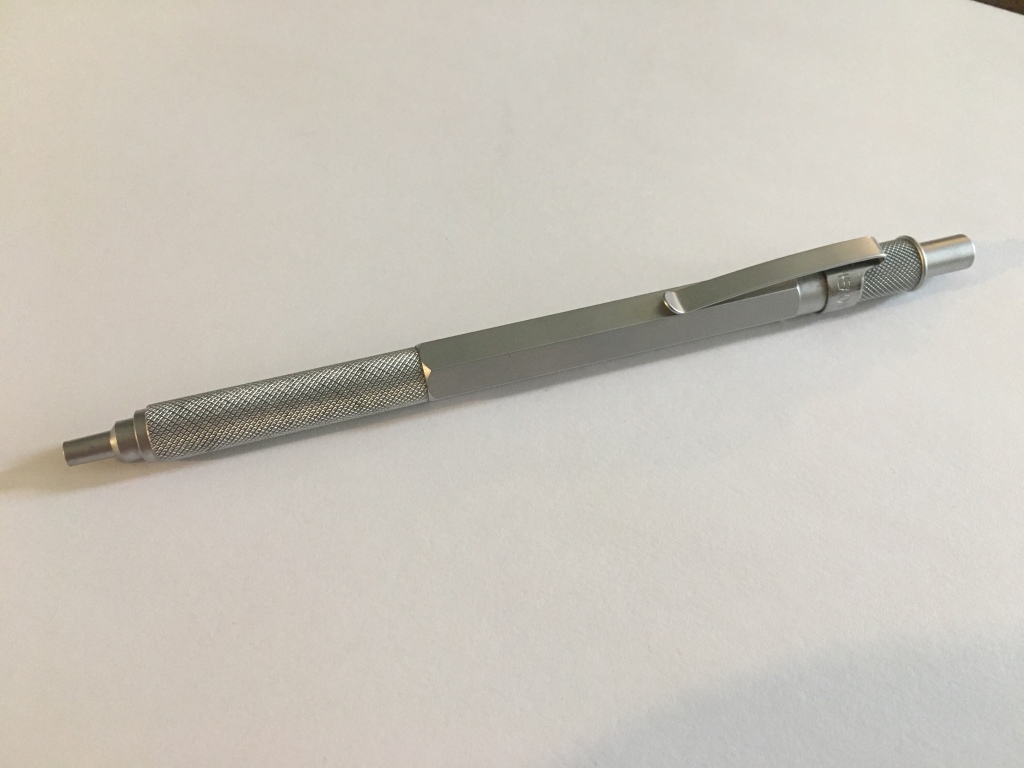 Rather nice and clean, even arguably near-perfect for how long I’ve had it, as I mostly use this thing to mark dates on my calendar.

My dad is a fan of fountain pens, and I’ve seen him spend a lot of time keeping them pristine. This pen isn’t quite up to that standard, but I still feel a happy amount of pride seeing the thing look so nice.

Now compare that to the pencil:

Talk about grungy and well-used. Pretty much the exact opposite of the pen.

It’s a perfect depiction of the difference in quality that comes from use, because I seriously use this sucker for everything. It’s worn down, with some of the metal finish scraping off throughout and the grip toward the tip starting to rust and smooth off.

Even the back of the pencil is a shadow of its former self with an eraser that’s used completely down to the nub. I actually have to take the whole thing apart just to add extra lead into the thing.

Compared to the pen, you might think that the pencil being in such a worn-down, kind of disgusting state would drive me crazy.

You’d be right, to an extent. There are moments where I get some raw spots on my fingers from the messy grip, which inevitably serves to leave my hand smelling like worn metal for a time.

Arguably there’s something to be said about my right hand just being a greasy mess. That’s probably the only explanation as to why the pencil would get to this point, and it’s a clear symptom of my overuse.

Yet I think the dichotomy between the pencil and the pen are part of what I’ve come to love about these things so much in the years that I’ve had them. Not only are they great utensils, reminiscent of a nice time in my life given their association with my high school graduation, but they also represent two sides of my psyche at some deeper level:

The somewhat OCD side that prefers to keep things clean; and the hard-working side that will keep working away at the same thing over-and-over until its worn-down and well-remembered.

Or perhaps I’m just putting too much thought into something otherwise negligible.