Nothing like the smell of a fresh Fire Emblem Heroes banner in the morning.

This Brave Redux banner, essentially a rehash of the Farfetched Units idea from last year, immediately holds a very special place in my heart. Because it is quite literally the definition of a ‘cuck my friend Jonathan’ banner.

For years he has been asking Intelligent Systems to add Kliff into the game. Plus, he and my friend Mitchell always joke about Loki being great for her…

Two large personalities. If you catch my drift.

So between those two being together and Owain, one of the best units from Awakening, joining in… Well let’s just say we had a great time laughing about how many orbs we were going to waste on this one when the trailer dropped.

But of course the trailer is only half the story. Are these three new Brave units worth summoning?

While it’s fun seeing Intelligent Systems add another original-to-Heroes character into our summoning pool, I’d be lying if I said Loki was anything but the least valuable unit on this banner for me personally.

Her special weapon and signature ‘Restore’ Movement Assist are great selling points in conjunction with Odd Attack Wave, as they encourage Loki to stay near her allies to cure their status ailments and boost their power.

However, beyond that she also has that A skill I don’t really understand and… Well… The other two units on this banner are special.

So let me jump into them.

It’s been 83 years, but we finally have a brand new Fire Emblem Echoes unit in Heroes. Not on its own banner with, say, Silque… But pickers can’t be choosers.

We can finally finish a full collection of the Ram villagers, and that’s worth Kliff being here.

Even if I’m personally uncomfortable not seeing him as an archer when that was his amazing niche in my playthrough of the game.

At least in Heroes Kliff’s unique weapon gives him a different interesting niche to fill. When coming into battle with a lower attack stat, he gets buffed in all of his stats. Throw on a different Special Attack and one of the extra Fortress Sacred Seals and he might honestly be a force to be reckoned with. Plus his design is sweet and that always helps.

But also replace that C skill. As you’ll see with Owain coming up next, only Loki got a good deal in the C department.

Even if Kliff is a rare Echoes unit that I’m intrigued in summoning, Owain probably takes the cake as the most interesting build on this banner for me.

Except for the fact that he’s yet another strong sword infantry unit. There are so many of them.

But Owain stands out in that his preferred play style seems to be working alongside other characters. He gains an Attack and Defense boost thanks to that bond, as well as a stronger Special Attack trigger (up to 35 damage thanks to Wrath). I love the idea of playing him closely linked to a supported ally, perhaps with a different C skill. One of the Attack waves perhaps?

He’s a goofball and his aching blood shuttering hand over face pose is god damn iconic. He’s pretty much the sole reason I love the very similar Gladeon in Pokémon Sun and Moon.

By all intents and purposes he’s also far better than Odin. So bring me my Owain, Intelligent Systems.

Normally this is the segment where I would post something about my summoning luck.

I would if my luck on this banner thus-far wasn’t nonexistent.

So far I’ve gotten an extra Eirika to merge, then a five-star Gray showed up to ruin a 3.75 percent summoning streak.

I’m a bit peeved at that, almost entirely because Gray is not the Ram villager we’re looking for.

I also wasted a good 60 orbs getting there, so I’m hovering at about 20 or so right now. Probably not going to spend any more for a while, but we’ll see.

Certainly the paralogue story orbs should be encouraging, right?

Editor’s Note: I’m trying my new smaller photo upload system on this post, so if the images are hard to see just consider this an experiment that I’ll rectify next time Heroes releases a banner.

Alright I’ll level with you. This is probably the most underwhelming Paralogue we’ve had in a while. Especially considering we just finished doing Halloween business.

It starts with the Order once again remarking that Brave Heroes have arrived. 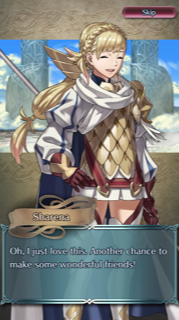 Along with Alfonse, again, making a comment about how strange it is that the people of our world for some reason decided to ask for one of the game’s major villains as a Brave Hero.

Which also is somewhat confusing in that Veronica was a totally novel unit in her Brave banner but Loki isn’t?

Then again the Farfetched Units were not unique either. They were just characters from their games.

So I’m really not sure what the formula is here, Intelligent Systems.

All I know is that Loki’s first arrival is alongside future Grand Hero Battle fodder Aversa from Awakening. And they’re basically the exact same character: 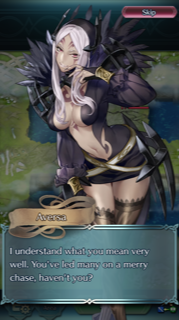 Except that Aversa is like Loki blended together with Tharja, and Loki herself has no soul according to Aversa. She says the healer gives off the same aura as Grima which…

Yet, as much as I do like seeing these two play off of each other, they pale in comparison when you throw Owain and Kliff in the same room. I’m just going to show you the main chunk of their exchange, it’s that good. 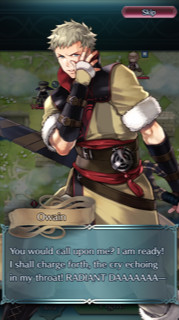 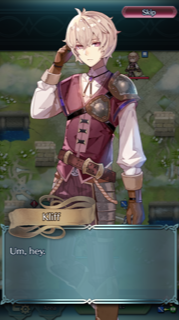 Is it weird if I ship these two about an hour after they were introduced into the same universe?

Because I’m definitely up for doing that.

However once the Order of Heroes arrives at the final battle, it’s just kind of standard fair. They all riff on the ideas presented previously, you fight and afterwards they all say they’d be happy to join your team.

Even if apparently they aren’t because all I got was a lousy, stinkin’ Gray.

C’mon Gray, why’d you have to play me like that.

If this post overall sounds a little low-energy, I’d blame the fact that I decided to finish writing it at 2:00 a.m. instead of just waiting for the normal morning hours like I had intended to.

What can I say, the muse came to me.

Speaking of that muse, I know this post goes a good 300 words or so over the self-imposed limit that I mentioned talking to my friend Spencer about… But honestly I feel like these Fire Emblem posts are sort of the exception to that rule.

First, because I’m the only one who reads them.

But also because easily a good 400 or so words are spend just copying the skill descriptions? And those are a necessary evil, less so me giving my thoughts and opinions.

But anyway, I’m really tired and want to wrap this up. Let me know what you think of the new Brave Heroes in the comments, or somewhere else on the internet!

Personally still hoping that Sacred Stones units are next on the docket… Though less so now that I’ve spent too many orbs just to get Gray.

Screw you, Gray. Never even liked using you in Echoes.

So obviously it’s been a while since we had the last huge batch of Pokémon Sun and Moon information drop,  and at the time that it did I was unable to talk about it due to some school commitments (particularly getting my story for one of our issues finished, an especially time-consuming thing since we’re officially on daily productions).

It’s really been killing me not to talk about this too, since there’s so much incredibly good stuff that we got to find out about in the update.  Seriously pretty game-changing kind of stuff.  With the game coming out in November I figured we were done getting really big surprise announcements, but clearly I was way off.

Even though I’m still really busy with homework and preparing for this upcoming week’s batch of newspapers, I still wanted to try and talk about Pokémon.  If nothing else, it’s a wonderful stress relief for me in an honestly very stressful time, and there’s a theory I had running through my head that I teased in the last post about this that I’ve had plenty of time to think on and really simmer down the details.

So, if you’re down to hear me ramble a bit, check out what I’ve got under the cut.  Personally I think it’s some solid stuff, even if the game could very easily come out and totally blow everything out of the water.  That’s what’s fun about a fandom though, if you ask me.  The period of time where everything is up in the air and thoughts are abound about every thing that pops up.