I’m kind of late in the day getting this post out, but this time it isn’t so much from lack of interest as it is from other life obligations.

Led my first Gladeo meeting this morning, so I had to go to bed a bit early to make sure I was prepared.

It went pretty well in my opinion, though I don’t know if it’s faux pas to talk about how good I did that way, so I’ll leave it at that.

After all we got some more FE babies to chat about today, and this time they’re actually a bunch of characters I care about!

Let’s talk about them.

Ophelia stands out pretty well on her own for just being an amazing character. As Odom’s daughter, her in-game posture and overly fantastical dialogue are just great. As a unit in FEH, however, she suffers from having to fit into a blue tome pool that’s already fantastic. Thanks to her special Missiletainn spell and new Assist skill, she does actually present an interesting opportunity to create a mage-only team that’s glued together by her specialty. It’s something I’m actually interested in trying, so she’s pretty cool for that as well.

Despite being one of my favorite child units from Fates, Nina’s base kit in FEH is a little underwhelming. Her bow is very situational, and even if Draw Back/Link is a great combination who knows how they’ll play well together with the base weapon.

Plus that C Skill is outright useless unless you’re doing very specific grinding.

So with some investment Nina could be a solid unit, but I’m more interested in her for her personality than her viability in all honesty.

Out of all the units on this banner, Silas is kind of the odd man out. Literally in that he’s the only man in the group, but also just in that the rest of the banner is child units and Flora, who’s kind of a weird special case.

But he’s a cool character as well, so I’m willing to give him the benefit of the doubt.

That said, I’m least interested in summoning Silas due to how generally uninteresting his basic skill set is. Like yeah he’s a good defensive lance cavalry, but that’s kind of it.

Ophelia certainly outclasses him in intrigue on the blue stones, and it’s a shame that they’re stuck in there together. Just begging to cuck some poor player out of their orbs.

Now Flora. Is a very interesting unit, to say the least.

She has easily the longest weapon description in the game, which is hilarious by itself until you consider the fact that it’s kind of a broken weapon. +20 Defense on a unit that already has stellar Resistance is kind of crazy. Combined with her other skills, she becomes a walking wall who runs into enemy territory on her own, which is an intriguing play style.

Even though I feel like Close Counter would be good on her but that would conflict with the new Solo skill she boasts.

On top of that, she’s also the first colored dagger unit to be in our primary, not special event-specific summoning pool. So that’s kind of awesome.

Good on you for standing our Flora. As my secondary Fates waifu I’m proud of you.

I’ve come to find that it’s a bit silly to do the charade of “here’s what I want,” and “let’s see how lucky I am” leading into my summoning luck. Because let’s break the fourth wall here, I write all of these well after experiencing the story mode and doing my initial summons.

So I’m just going to cut to the chase. Got myself two of the three characters I actually care about already: 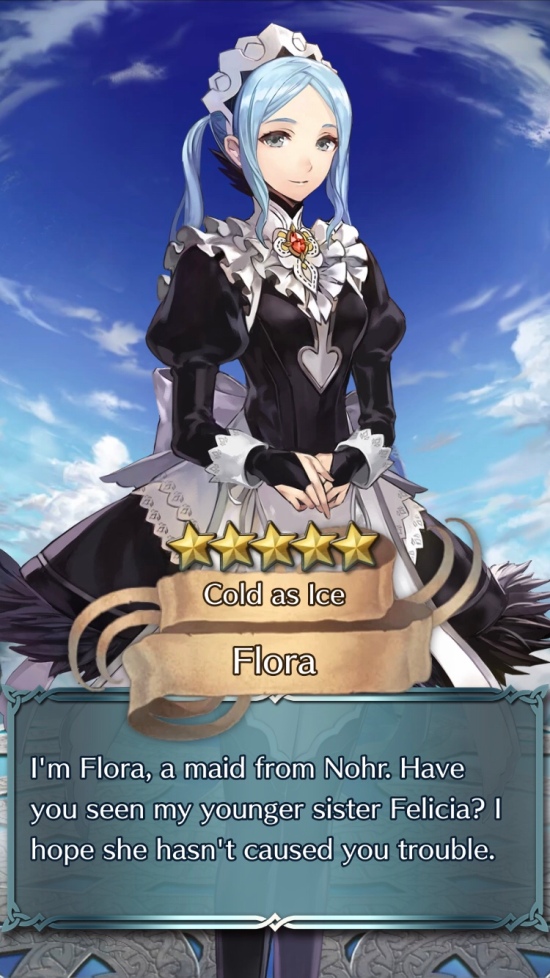 Ophelia here is totally neutral in terms of stats, and Flora has a Speed boon. Can’t really complain either way!

The only person of interest I’m currently missing is Nina, as Silas — for as good a character as he is — doesn’t seem super great. Plus, I’m of the camp currently assuming he’ll be demoted to four star status after this banner passes.

So there’ll be time for him.

But I would still like to have Nina. If for no other reason than the fact that I can make the perfect ship with Soleil that Fates never allowed.

Like come on IS, making Soleil only able to have a lesbian relationship with Corrin was pretty dumb. Soleil and Nina were meant to be together.

After all, cliché transition about getting orbs from the story mode to summon.

Except this time, the story of Book II is actually concluding with this installment. So we have an extra special layer of intrigue!

It’s a bit odd how quickly IS decided to push through the end of this story. Typically we have to wait until the previous banner with a main story tie-in ends before getting the next one, but this time they decided to throw it in after the Brave Heroes banner cycled out — despite our last Genealogy banner still being available.

I suppose I can’t complain though. I’ve been looking forward to see how this wraps up after all.

Turns out they decided to take a much darker approach than I would have expected.

See it all begins with King Surtr torturing his daughter Laevatein because of how often she’s failed to stop the Order of Heroes now that they’re approaching his sacred ritual temple.

Her sister, Laegjarn, offers herself as a surrogate to take on the power of Múspell’s legendary dragon, a power they all know kills whoever takes it on.

As soon as the Order arrives thanks to the map Loki gave them at the end of the last chapter, they encounter Laegjarn for one final fight.

Once defeated, she dies. But not before begging the Order — and Fjorm in particular, who she’d bonded with earlier on — to protect her younger sister.

There’s also this kind of morbid part where she comments that her eyes have burned out her skull?

I’m not entirely sure whether that’s literal, but either way it’s pretty intense for a gotcha mobile game.

Oh, and let’s not forget, there’s also that cliché “could we have been friends in another circumstance” speech she gives before passing on.

It’s an emotional scene and everything… But that emotion is kind of undermined by the fact that some data miners found out the Múspell family members are going to be recruitable units eventually.

So the whole exchange just wound up being kind of hilarious in meta hindsight. Everyone assumed we’d be getting her after this chapter… But then she died.

I think that’s funny, at least.

Anyway, as the Order moves on we get to watch a B plot unfold with Veronica and Ylgr stuck in a jail cell together. 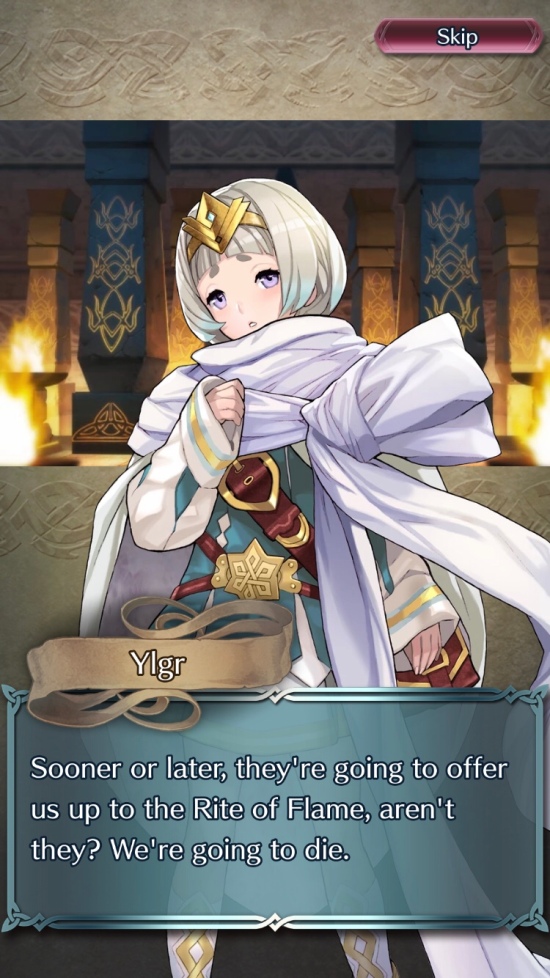 But that’s quickly broken off when Helbindi comes to save the two by getting them out. He plays it off as just doing it because, but those of us with context clues know he sees Ylgr as a surrogate for his own sister who was just recently slaughtered by Surtr. 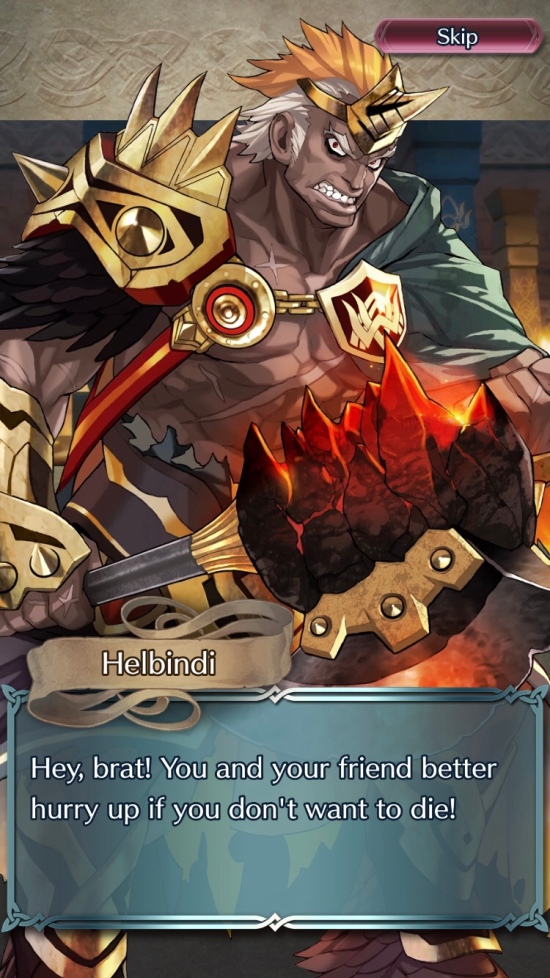 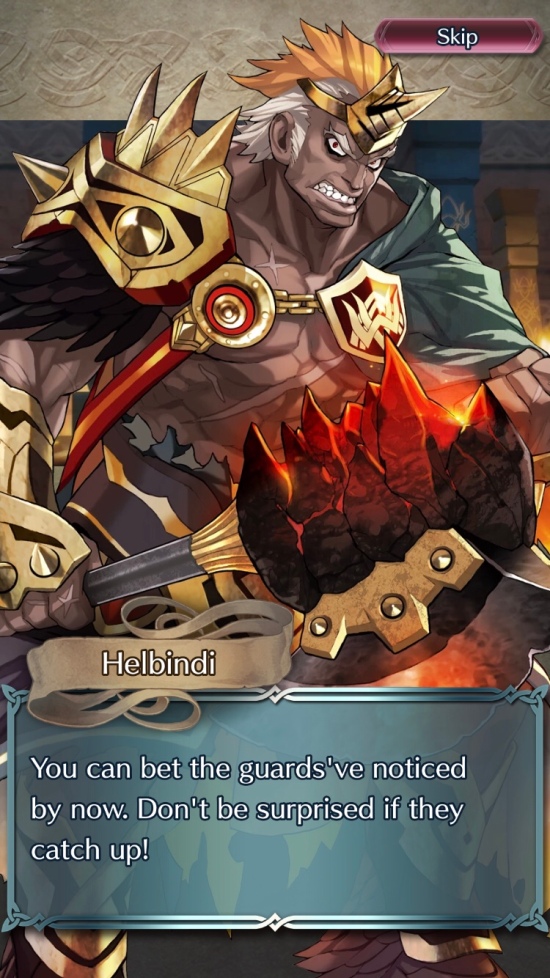 We get even more evidence of that in the very next scene when Surtr actually shows up after Helbindi sends the girls off on their own. 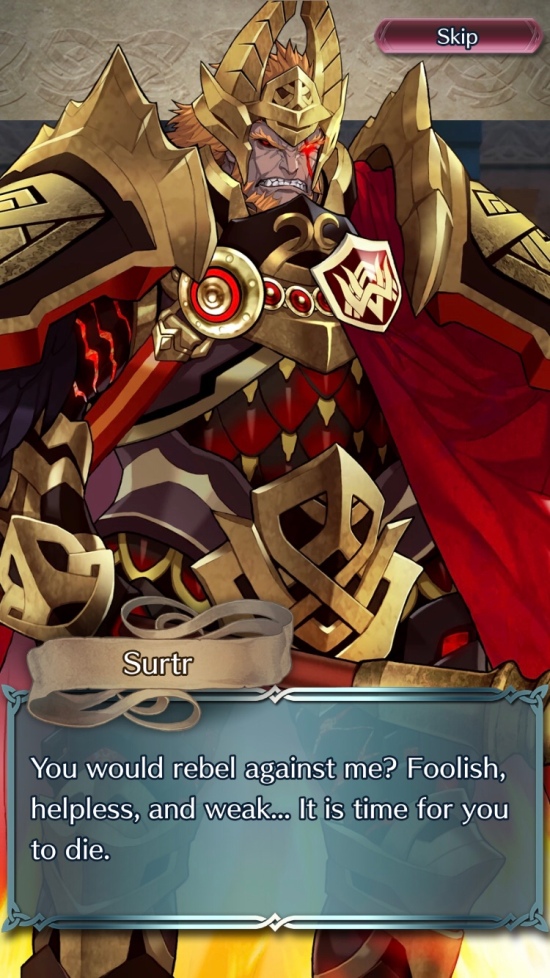 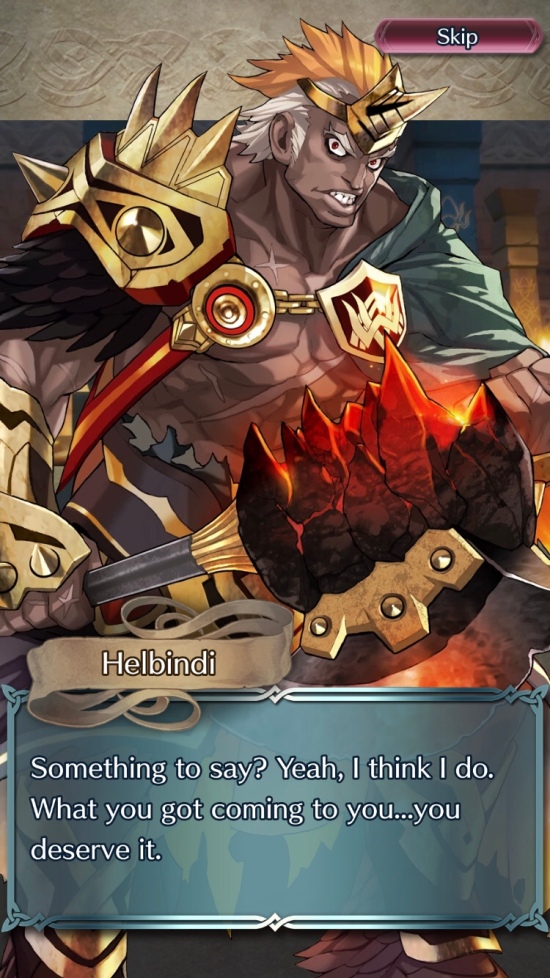 As Veronica and Ylgr keep running through the maze of a temple, they eventually run into Laevatein, who’s pretty upfront with the fact that she knows how shitty her father is but also doesn’t want him to kill her. 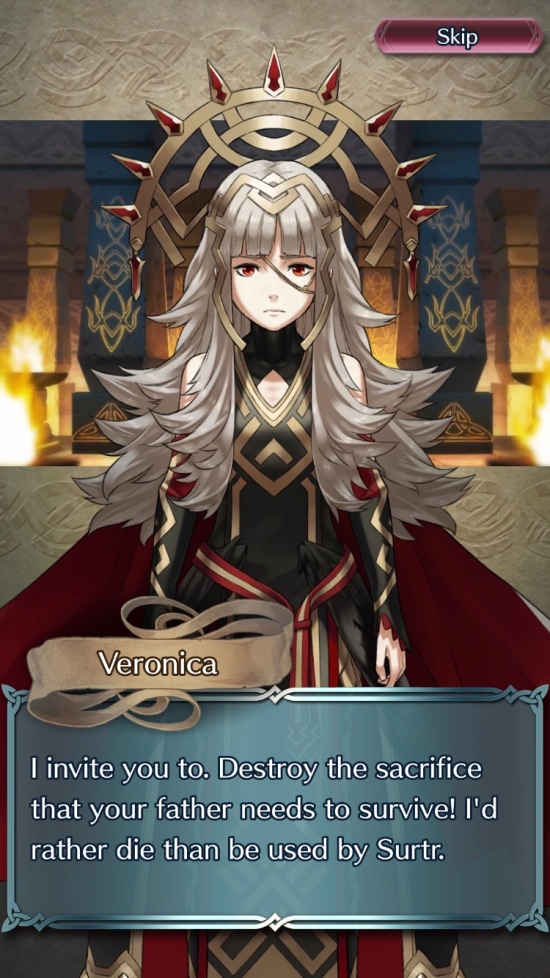 Yeah. Shout out to daddy issues? I guess.

But then, completely out of the blue, Bruno finally makes an appearance around the same time that the Order converges:

It was pointed out to me that this is actually the first time Bruno has shown up on-screen this entire Book, so it’s a bit of a deus ex machina to save Veronica.

Especially considering he has maybe… Two lines? For the entire chapter.

But hey, he’s here. That’s just kinda cool by itself.

With all of her rivals gathered in one place, Laevatein fights and then prepares to do the same blood ritual her sister did upon losing as a last-ditch effort.

But Fjorm stops her, letting her know that Laegjarn’s last wish was that she be safe and protected.

It’s actually a scene that’s very reminiscent of the end of Fates in the Birthright and Conquest paths, ironically enough.

Laevatein decides to live on and escape, that way she can take over her father’s empire once he’s defeated so she can make a much more peaceful regime.

I like the idea of her becoming the ruler a lot, but I’m a bit disappointed that they don’t play with it too much here. This is actually about the last time we see Laevatein for now, so outside of a reference to her at the end it’s sort of the end of her arc.

But hey, at least she didn’t die.

Oh yeah, also. We get official confirmation that Xander is fine after Veronica was taken away. 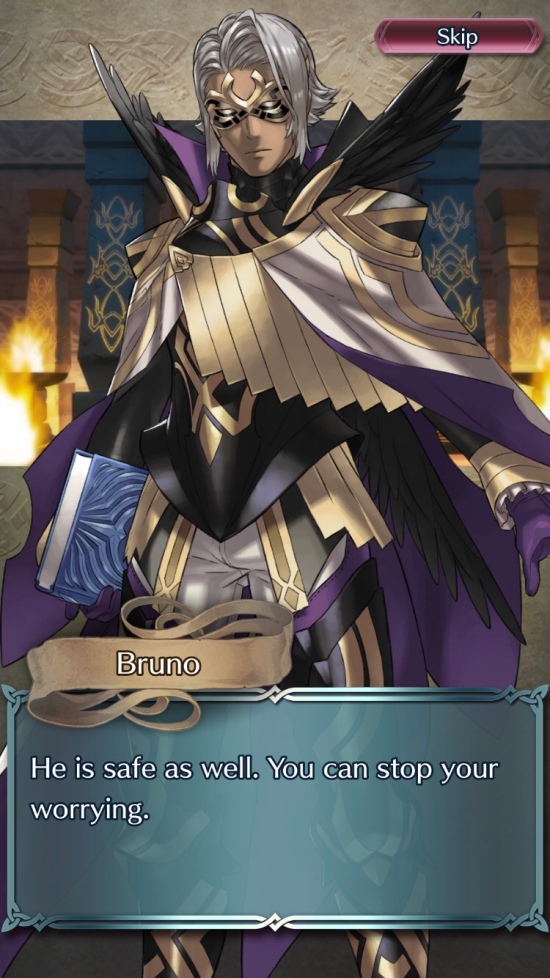 It’s a bit silly that they break away for a moment to let us know about this, but I do really appreciate the closure it provides.

The scene makes for a good bit of lightheartedness before jumping straight into the final battle.

Fjorm has a great moment of calling him out on his shit: 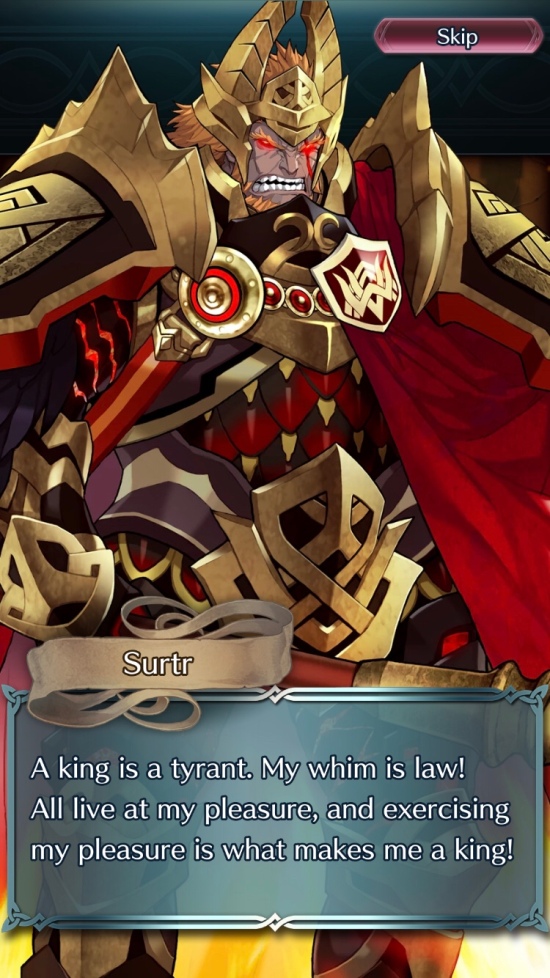 Then the duel begins.

It’s actually a relatively hard fight even on the easy difficulty, so I’ll give IS some credit for making a nice final boss.

But once he’s defeated, he is officially killed by those he’s scorned.

From there we enter an epilogue that wraps everything up in a… Kind of sloppy bow.

As I mentioned, it’s implied that Laevatein takes over Múspell, but we never actually see her again.

Veronica and Bruno just disappear off on their own to do whatever it is they’re doing, probably setting up the story of Book III.

Hríd and Ylgr are set to go back to Nifl, rebuild and have the older brother take over as King in the memory of Gunnthrá and their mother.

However, Fjorm decides to stay with the Order. Apparently, it’s only just now revealed that taking part in the Rite of Frost will lead to her dying, so as she says:

She’ll be staying with you until her inevitable death, apparently.

Which again is somewhat morbid to think about… Until you conflate it with video game mechanics and realize the fact that she’s on your team at all means she’ll live forever.

Yeah. Good emotional punch without too much follow-through.

And that’s all for Book II. After probably close to a year’s worth of development, this arc in Fire Emblem Heroes history is finally over.

As I stated a number of times during the early chapters, I really enjoyed watching a sort of small mobile game take on an overarching tale with interesting plotting and characters… Even when it got kind of goofy.

At the end I can pretty confidently say that it was worth following. So, I’m looking forward to seeing where the team goes with Book III!

That’s really about all I have to say about the end of the story and these new heroes.

I tried something a bit different with this post, trimming down on the wordiness in the character section and trying to be a little less picture-heavy in the story section. I think together those changes might make these posts a bit easier to put together and a little shorter, with more opportunities to use my own voice on them.

So let me know what you think about this style in the comments, when you’re also telling me about your thoughts on the new heroes and all those other calls to action I like throwing in.

I know nobody ever does them but hey. I like to leave open the opportunity.