Originally I was planning on getting part two of my “old stuff from my desktop Mac” series out today (in spite of the fact that only 2 of you actually read the first one, come on guys I was proud of that). But then the unsung combination of homework, Super Smash Bros. and work meetings kind of distracted me from it.

The subject is kind of near and dear to my heart, so I want the post to look really solid before I put it out.

That being said, as a result I kind of didn’t have a post to put out for all of you. For most of the day I was totally fine with that, especially considering I put out that post last week talking about school stress and how I might fall behind on this blog stuff.

Except then I went to the gym, took a hot shower and realized that I would personally feel bad if I didn’t have ANYTHING to share with you all today.

So here’s my brief sharing something with you all today. It won’t be long, but it is actually a nice update.

While that “Burnout” post I linked just two paragraphs ago was a huge laundry list of stressors to work through, it really did turn out to be a crazy in-the-moment explosion of my self-deprecating lack of confidence.

Since then I’ve done other things like talk about Superman comics (a post that Scott from NerdSync actually noticed because I was overenthusiastic about @ing him, but that made me feel super good), find cool stuff on my old computer and play Smash Bros.

So mentally I’m in a much better place.

That better place has facilitated actually working through some of the stuff I had on my plate to a much more productive degree. Now that I’m out of my own head and just ranting for the sake of it, I’d say the main stressors of the next two weeks boil down to six things:

Except wait, no longer are there six things!

As of about an hour ago, I officially turned in my Visual Comm essay: 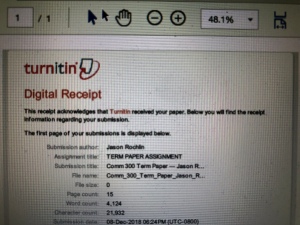 Yeah you know, the one that I wrote a post on while doing some particularly interesting research for a while back? Wound up writing ~13 pages with two pages of references.

Hope the professor likes it — maybe next time he’ll remember my name and not call me James in an email.

Definitely not still bitter about it

Thus my big list of concerns drops to five.

I know this post is a bit cobbled together and padded out by referencing older things on my blog, but I didn’t want to leave you all with nothing.

Because I love you guys!

… Even if you did leave my cool Smash Bros. post out to dry.

But hey it’s only been a day, so maybe that’ll pick up with time.

Either way, hopefully this post, if nothing else, serves as a reminder that even the most stressful periods of time in the moment can turn out okay on the other end.

Yeah, that’s a good message to take away from this. Nailed the heartstring appeal, Jason.