It’s funny. After spending three-or-four hours locked away writing this ten-page paper for my Mass Media Ethics class, I looked outside and thought it was so late that I missed my window to write something substantial on my blog.

All joking aside, I am actually pretty tired of writing after banging out an extensive essay on ethical philosophies when publishing graphic images in newspapers.

Plus I’m having a pretty fun time watching my dad get real annoyed at the T.V. while the Dodgers seem to be choking out during seventh inning of game five in the World Series.

So I won’t write too much here today. I’ll save some energy for another small Evolution and Creation paper I have to do next probably.

Certainly I won’t bore you all with the particulars of applying concepts like Utilitarianism and Communitarianism to national news publications — go ahead and watch NBC’s “The Good Place” if you want any of that. The show does it in a far more entertaining way than I could.

Instead I think I’ll briefly talk about my next “for fun” reading project. If you want to consider supplemental materials to help with my novel a “fun” book. 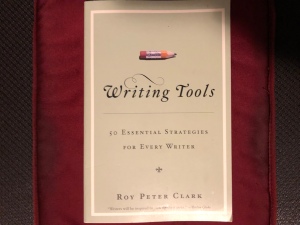 Professor Rizzo suggested I take a look at Roy Peter Clark’s book here as a way to pick up on some extra skills for more literary writing.

So far this kind of thing has been one of the early benefits of having a mentor for my Honors Project. Not only do I have an instructor to grade me in classes over the next year, someone who’s willing to read whatever I write and give me advice, but I have someone in my corner with a wealth of experience to be able to recommend books and connections that may help my writing in the long run.

It’s super cool, and I eagerly ran off to Amazon to pick this sucker up after she mentioned it last Tuesday.

Now that is has finally arrived, I’m excited to crack it open and see what I can learn. Thought that was worth sharing with the world, at the very least on the off-chance that you too are looking for some supplemental materials to help with whatever you might be writing.

However I’ll have to personally broach the subject another day, because for now I’m off to homework land once again.

Even though I’m sure I definitely could.

In my somewhat exhausted, mediocre blog post from yesterday which I completely understand if you all skipped, I mentioned that one of the highlights of the day was finally finding a mentor for my Senior Honors Project.

It has been a long time in the making, as I was supposed to find a mentor and get a proposal for my project signed off on last semester. However, I didn’t feel very confident with my project premise at the time. At least not confident enough to ask anyone to stick with me for a year on a large venture.

So I took the summer to work on the overall premise of my novel, hashing out the plot and some of the major characters. All of it was under the impression that I’d come back to campus this semester and find someone to work with me right away.

For the most part I accomplished step one, getting myself to a place of comfort with my overall idea.

However, finding someone to work with was much more difficult.

I’ve approached a good number of different professors in the Comm Department, English Department and Honors Program over the last few weeks and had very little luck.

The reasons varied, usually fitting into one of three categories. Either they had no interest in working on an Honors Project, were too busy working on other things to devote enough time or had some extraneous circumstance preventing them from helping — despite wanting to.

It was frustrating and somewhat disheartening to me, even if I completely understood where most everyone was coming from.

Though it wasn’t all negative, as many of the people I talked with were able to offer various pieces of advice that I’ve since incorporated into my ideas for the story and how I’ll be processing the writing of it.

It simply became more of a concern under the upcoming time crunch of having to register for classes at the end of October. Because one of the main drives behind finding a mentor is that multiple independent study classes are required for the project, and your mentor grades you for it.

I approached Professor McConnell, who’s one of the main Honors instructors that helps students through the project planning stage, on Monday expressing concerns that I was not having a lot of luck. He recommended a few more teachers that I should try and talk to, and said if I continued to have trouble we’d take some more drastic measures down the line.

One of the teachers he had suggested was Holly Rizzo, who I’m currently taking Mass Media Ethics with. We’ve had a few conversations in the past and I genuinely enjoy chatting with her and being in her class, so it seemed like a decent option to try.

Within about 30 minutes of asking, we had already agreed to work together. It all just clicked so well for a number of different reasons.

After months of anguish and frustration, I finally had a mentor. It felt awesome. And I had Professor McConnell to thank for pushing me in the right direction.

Or so I thought.

The story continued today, when I talked with McConnell after our class — he teaches the Evolution and Creation course I’ve been enjoying thus far and have talked about a couple times. Namely with that short thing I did on Charles Darwin.

He was really excited to hear that everything had worked out so perfectly, as I was. Said it made his day even, and that I deserved to work with someone who was eager to work with me.

Felt good to hear him say that.

But then… He pointed out that he had no idea who I was talking about with the person I’d taken on as a mentor.

As it turns out, Rizzo was not the person he has recommended I talk to.

He had recommended I talk to Heather Osborne-Thompson, a professor in the CTVA department (who I talked to at one point for a story in the Daily Titan last semester, as a fun fact for you all).

Somehow or another I took that as Holly Ocasio-Rizzo.

Signals were very much crossed somewhere along the lines. I blame the very similar H & O name structures, and probably the fact that I was busy being worried about my midterm for Rizzo the next day.

Yet, despite the fact that I had gone somewhere he did not suggest, it all worked out almost too perfectly. Professor Rizzo has experience with Honors projects that are eerily similar to what I’m working on now, and she had a bunch of really interesting ideas to present that got me more excited for what I’m working on.

I’m not a very religious person. My family kind of lives by the moniker that we’re bad Jews.

But I would be willing to argue that some semblance of fate weaved its way into this series of events. Because it really does all seem to have worked out miraculously well.

Hopefully that will continue to be a pattern with my Honors project stuff. After all, now that I’ll be getting past this phase I’ve been held up at over the last couple months, I’ll probably have a lot more to talk about around here.

And boy am I excited about it!