Don’t worry, I can already hear all of your complaints. “Three posts in a row about fixing your room up? What’s the deal Jason, why even bother?”

To be fair, until about an hour ago I was not going to put anything up on my blog today. I have two ideas set for tomorrow and an event on Friday, so the rest of my week in writing is planned out and I figured that could be enough of an excuse to skip a day.

But then I realized I would honestly feel terrible about myself if I broke my New Year streak so early.

So this quick n’ dirty post is mostly for me to make sure I don’t have a gap, and if you want to just come back tomorrow when I have a Fire Emblem Heroes banner release and a movie review lined up, I won’t harbor any ill will.

If you happened to be curious how my room wound up looking after I spent all of yesterday cleaning, then this might just be the filler content for you!

Yesterday I talked about how my room hadn’t changed much since the last time I showed it off. That was early into the cleaning process and it turned out to be a lie. A lot of the tchotchkes taking up space on my countertops hasn’t changed in terms of contents, but the layout is pretty new.

For instance, here’s the top of my TV cabinet — now featuring a fancy new backdrop:

Told you that’s where I was going to put the Naruto poster. Even if I wound up having to move Diancie to make space.

As usual, my line-up of chess club trophies from elementary school remains in-tact. For years I’ve adored the way younger me happened to conveniently win enough trophies in specific placements to create an upscaling pattern, and I always put them up.

Except now in front of the trophies are the Luna wand I got from Universal Studios and a toy car that I happened to pull out of the dust and turmoil underneath that same cabinet when my sister and I pushed it flush against the wall.

We did so to clear some room next to my desk for where this Gladeo computer is going to go. Though it’s admittedly strange to not have that cabinet take up a diagonal space.

Fun fact, on top of that convertible I also found a list of interview questions from when I covered my friends taking part in the Bay Math League way back in middle school.

Now that’s definitely a story for another day. Remind me to tell it, because I actually have some fun throwback material I can use.

Beyond that car, the most notable changes to the collection are that Han Solo is on the left side instead of the right, replaced by Tanuki Mario — who used to be on top of my main clothing drawer.

I also added a few plushies to make the right side into a Pokémon-dedicated corner and it’s one of the best ideas I’ve ever had. I’m considering moving some other posters over there as well to really complete the picture, but I don’t know how much it would mess with the feng shui.

You know, if you believe in that sort of thing.

I took Chinese for three years in high school so I feel like I’m somewhat obliged to try believing in it.

The next most changed surface in the room is that aforementioned main clothing drawer, which is constantly subject to me coming up with new Amiibo configurations: 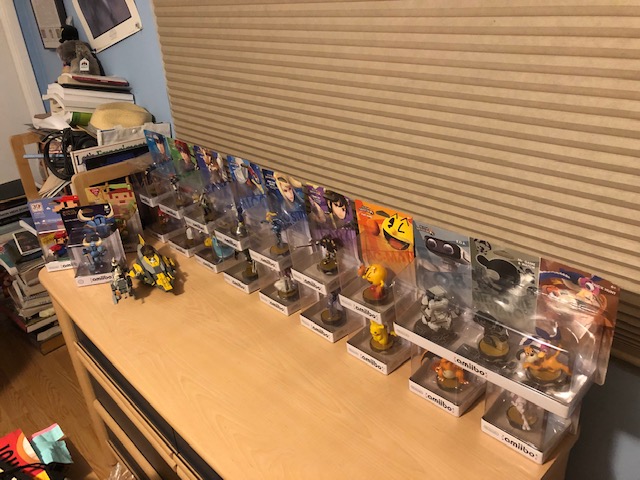 All things considered this is probably the most stable configuration I’ve tried yet, and I think my Star Wars legos fit in pretty well on this side of the room.

However, this wasn’t the first layout I tried.

Originally I thought about spacing the Amiibo out across both surfaces in a curving manner:

I love the way this set-up looks, but unfortunately it took up too much space.

Saying that is a bit crazy when I realize I have 19 Smash Bros. character Amiibo and there are 73 fighters so far? But still.

Needed some room to fit all my other stuff too.

On the bright side I have an outlet like this to save a photo of the curving configuration, since it is one of my favorites aesthetically.

I think that about covers all the major changes to my room decor starting out 2019. As usual I’m sure it’ll be subject to adjustments as I pick up more useless garbage throughout the year, but for now I’m pretty happy with how it looks!

Hopefully this filler post was worth your time, because it wound up being more fun for me to write than I had expected.

It’ll be worth it. I promise.

After an interview fell through this afternoon, in order to not be a complete bum for the day I decided to finally put my full energy into another New Year tradition that I’ve been half-assing for a little while now:

I’ve done an entire post about the subject in the past, and to be honest the overall appearance of the room hasn’t changed much since then.

It will sometime soon when I finally get this new computer together and put in a proper spot, but for now you can get the gist of things from that other post. All the decor is mostly the same.

Arguably the most notable thing I had originally wanted to talk about with this post was how nice it feels to finally clear off a usually cluttered surface.

Because just look at this:

Though I’ll admit it’s also satisfying to remind myself how much I usually put up without it looking too busy.

However, if you’re keen on picking up context clues with blog post headlines, featured images and past tense language in text, you know that I wound up finding something completely different to talk about.

Something much more whacky and interesting.

Hidden away behind my bookshelf in an unopened plastic casing was this astounding poster:

You may be wondering why I decided to just put up a picture of the woman’s face instead of the full image for my Featured Image, and to be fair it’s 99 percent just to be funny clickbait.

But it’s also because that was genuinely my reaction when I first unraveled this thing.

Now you can’t just dig up something this bizarre and not try to do a little bit of research into it.

As the corner of the poster suggests, this was a promotional poster for “Naruto Ultimate Ninja Storm Revolution,” a 2014 game released on the most notable last gen consoles besides the Wii U.

I never played the game, and in fact I don’t think I’d even heard of it until right now.

So where the hell did this poster come from?

Well, according to this Reddit post I found from way back in the day, it was a promotional item given out at GameStop for pre-ordering Ultimate Ninja Storm Revolution.

But after a while, employees just started to give them away with anything. I must have picked it up alongside some totally different game and forgot about it.

I shared this rare finding with my friends and together we did a bit more fun elaboration into it. For instance, my friend Nina (who lives in Japan and is studying to be a translator) gave us a bit of insight into exactly what it says:

Knowing this is basically like a cheesy B-movie poster is kind of fascinating, honestly.

Then my friend Jonathan went out to YouTube and found us some footage of Mecha Naruto in action.

Probably the most beautiful nightmare fuel I’ve seen in a long time.

Just look at his ultimate jutsu. I’m dumbfounded staring at such a glorious spectacle and frankly want to go thank anyone who was involved in the executive decision to include it in the game.

I’m absolutely putting this up on my wall tonight. Probably right up next to my Mega Diancie poster.

Gotta fit that call to action in here somewhere, so let me know what kind of weird stuff you’ve found while cleaning up around the house! This is probably one of the more strange things I’ve ever dug up, so I’d be curious to know if any of you have some similarly unexpected items hiding away.