The fact that we’re seeing our third Spring banner gave me an existential crisis.

I felt like the banner with Sharena and Alfonse just appeared, but it was 13 Paralogues ago.

Not sure what happened over the last year, but I don’t think I’m down for this whole passage of time thing. It’s starting to scare me.

Even if cute bunny characters kind of make up for it.

Talk about a bizarre blend of characters.

Bruno and Veronica make sense in the footsteps of Alfonse and Sharena (even if the Paralogue story confuses everything). However, this being Bruno’s first and Veronica’s second non-canonical appearances as units is pretty weird.

They also have forgettable skills. Bruno is a healer with healing attacks, and Veronica is just a better Spring Camilla.

Two years worth of power creep, yo.

Palla is probably the most solid unit. She’s a flying red dagger that’s built to kill strong armored bois like Surtr, and with her Whitewing sister Catria appearing last year we have a cool progression to Est in 2020.

Marisa is the real surprise. Because I love the game I can’t complain with more Sacred Stones representation (even if I wish we had new characters), but she doesn’t seem to mesh well with the others. Despite having an amazing character bio.

Plus her skills are very basic.

Yet being lukewarm on my opinions toward Marisa means she’s prime material to get unexpectedly summoned in my first round:

The fact that most of her quotes are about watching rabbits as research is incredible. Really makes up for everything.

Marisa was special from being a Sacred Stones rep, but the only other character I’m interested in is Palla. Don’t know if she’s worth pulling for alone, so I might save my orbs.

Now, let’s get into the real meat of this banner: That sweet Rabbit Lore.

Like I teased earlier, this Paralogue does some bizarre things with the status quo of holiday units.

Right off the bat we have our world’s Loki trying to convince Veronica to go to the festival:

She does so using Bruno’s appearance as leverage, but this just raises a bunch of questions.

Usually special units are from alternate universes to explain how two of the same characters exist in one place.

Yet there’s also a Spring Loki while we have regular Loki — but the Spring version is still ours according to the Paralogue.

In other words: It’s all a fucking existential mess.

Except none of that matters because the whole reason they’re there is to see whether Loki is lying to them: 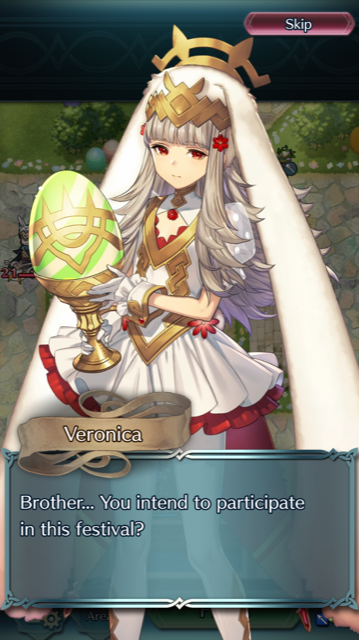 Bet you didn’t remember that storyline is still going on while the Order of Heroes fights death herself.

The Order never appears here. Which is a nice change of pace as we saw with the 2019 Valentine’s Day banner.

The whole Paralogue centers around the Embla family. Palla and Marisa have a totally disconnected mission that feels like they’re conducting goofy business as usual while two canaiving people sneak around.

By the end we find out what that treasure is, and it’s arguably the most interesting thing about this: 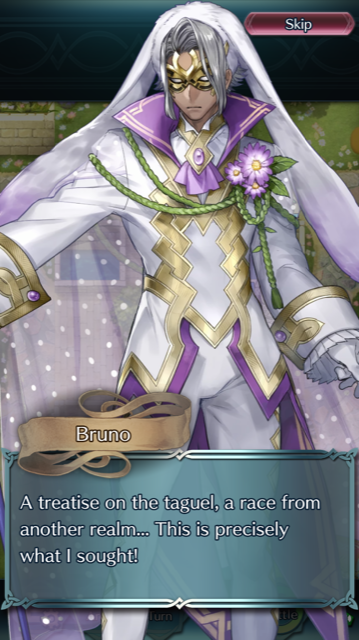 I certainly didn’t see Taguels being referenced. Especially so soon after Panne got added into our ranks through a Grand Hero Battle.

While I started to question the relation of rabbit people to a festival where people dress like rabbits, Intelligent Systems doesn’t give any answers. They simply tease a continued treasure hunt with Loki telling Bruno and Veronica where they can find the answers.

Even if we have no idea how Taguels are supposed to help with their blood curse.

Guess It’ll all come together eventually, but at this point we’ll just have to table the discussion and get back to our non-Playboy Bunny lives.

Speaking of real life, did you all hear that Google is planning to launch a console for streaming video games?

Because I think it’s a very interesting concept that I’ll have no interest in buying. I prefer cartridge/digital download games that don’t rely on constant internet access, personally.

I just figured that would be a better segue out of this post to show that I pay attention.

That said, let me know what you think about these Spring units! And let me know how you feel about the endless march of time.

Because… Yeah, that still hurts.

This likely won’t be a substantial post (he says hopefully before getting into the actual writing portion of things), but I felt enough happened in Fire Emblem Heroes today to warrant something before the inevitable one year anniversary celebration.

First and foremost, there was a new Feh Channel released yesterday that updated everyone on new things coming around the bend.

I unfortunately have not had the time to watch it. That’s a majority of reason why I’m expecting this to be short.

Basically, I didn’t have time because all of yesterday evening was spent helping to cover President Trump’s State of the Union address.

I was at the College Republicans club watch party, took my own photos, did a wee bit of live tweeting, got a bunch of interviews… It was a pretty nice experience overall.

Then there was some weird stuff going on that led to us not having an article on it quite yet for some reason? But uhh… That’s a story for another time. Namely a time when that article actually gets written and published. Which will hopefully be soon.

That said, if you’re interested in watching the Feh Channel check it out here. I’ll probably get more caught up on the subject matter later.

In the meantime, some of the updates elaborated on in the informational video have already begun to roll out.

My picture just above kind of spoils things, but not as obviously as the featured image for this post… So I’ll quit burying the lede. 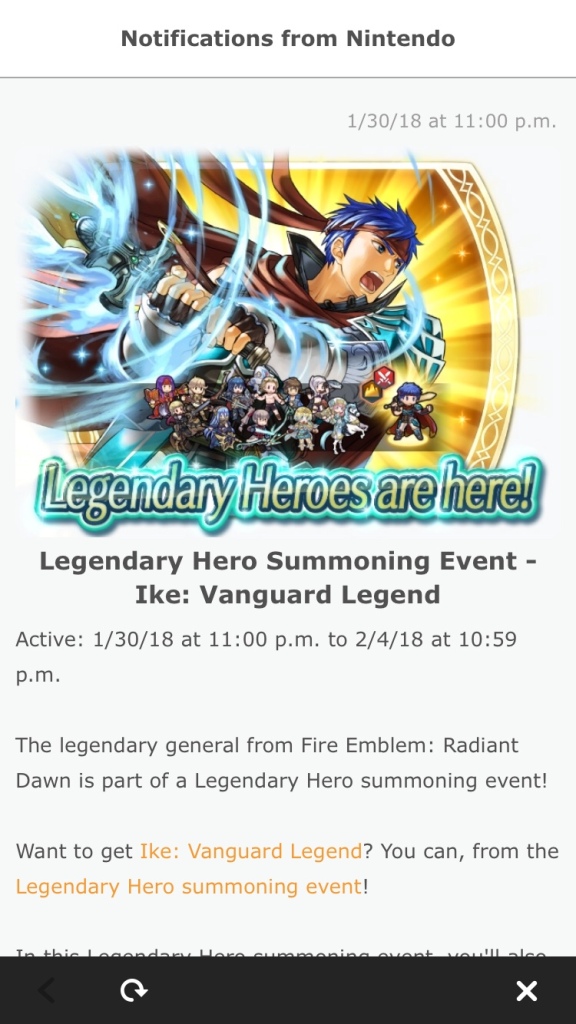 Ike has returned in a third form, this time as a Legendary Hero.

Seriously, anyone else remember when we were all wondering why Ike hadn’t shown up in game when he was clearly a title character all over the branding?

Now a days there are three different versions of Ike: His normal appearance, a Brave variant and now a Legendary variant (which is incredibly reminiscent of his Smash Brothers counterpart, I might add).

One of these days I’m really going to have to play the Radiant titles so I understand why Ike was so popular better.

But until I do, I can live out the hype with this beefy looking unit right here.

Assuming I can summon him.

Which, spoiler alert, has not been going super well for me so far. But because there are also some other subsidiary units on his Legendary Banner that I would want (namely Summer Xander, Gunnthrá and Siegbert), I’m going to keep going at it.

In controlled bursts. Not looking to go too crazy when there’s presumably Valentine’s Day units coming up soon. Even if there are only four days on this banner.

Though with the exceptional grace of a beautiful transition, there is an extra source of orbs in our midst as well. 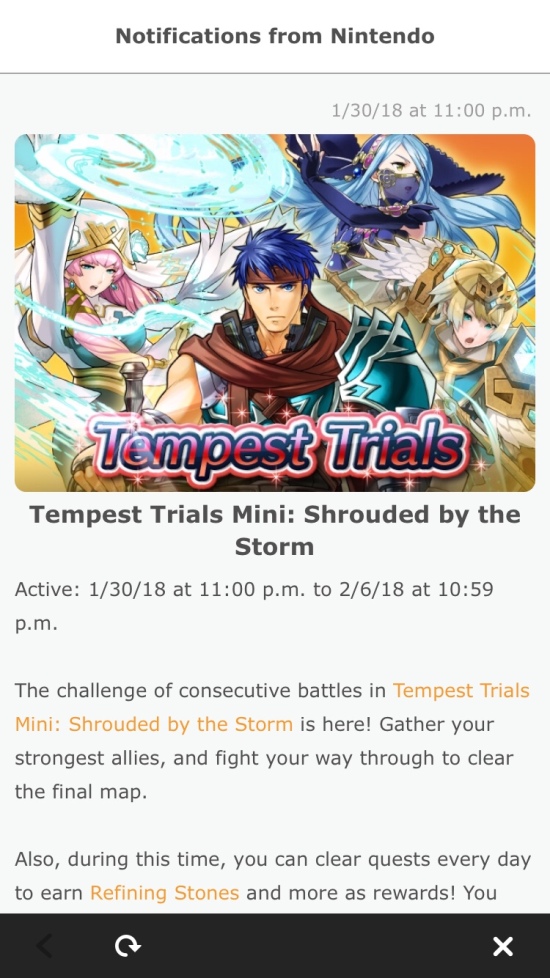 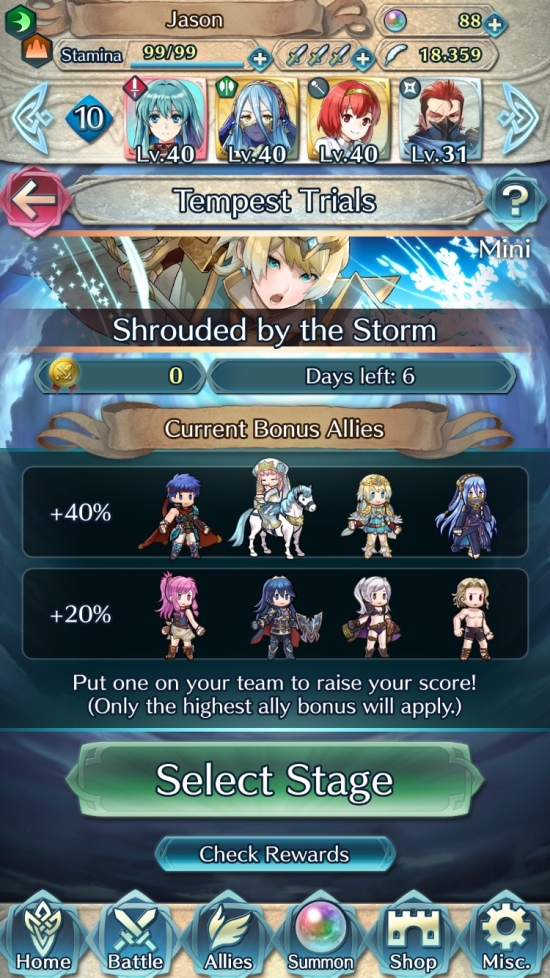 Another miniature Tempest Trials has arrived, not too long after our last New Years-themed event. A long time ago I complained about burnout associated with these suckers, but since I’ve discovered a grinding method that works for me I’m far more welcoming of it.

Even if that trial I complained about was themed after Ike’s games, ironically enough.

Maybe this is what it means to have a full developmental arc?

Who knows. After all, all of that is beside the point because really who can complain about extra orbs, medals and a new character? Especially when that new character is Marisa:

You’re no Neimi, but you’ll do. Welcome to the team.

Part of my burnout treatment has been not talking about these Tempest Trial runs like I used to, but this one is special enough that I felt it would be worth delving into the plot a little bit further.

As always, it begins with Lucina (or Marth still, despite the fact that it seems like everyone knows something is fishy behind her mask) arriving at a new place to take on yet another outcropping of the threatening Tempest. This time with Heroes-specific units to greet her: 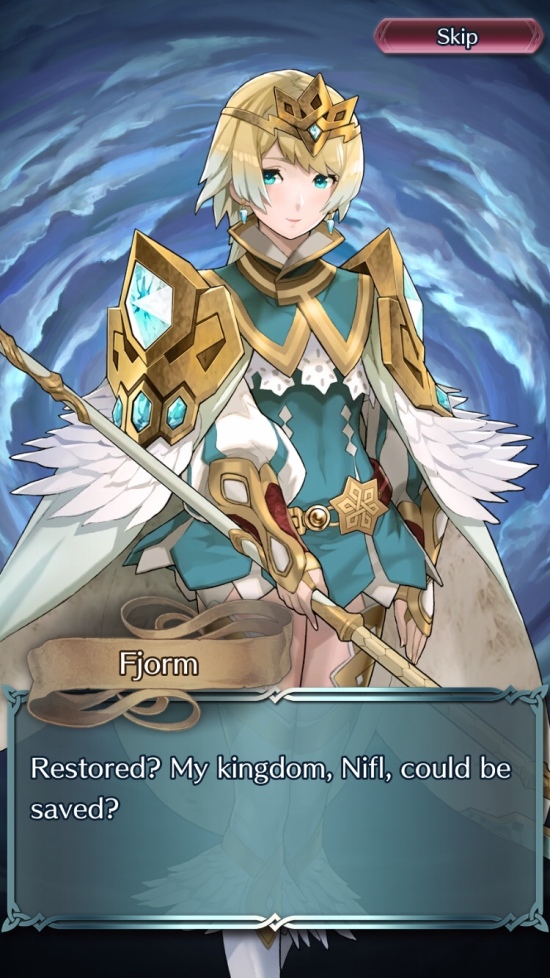 Fjorm seems interested in helping out, but as I mentioned is suspicious of the mask. It makes Lucina untrustworthy apparently. 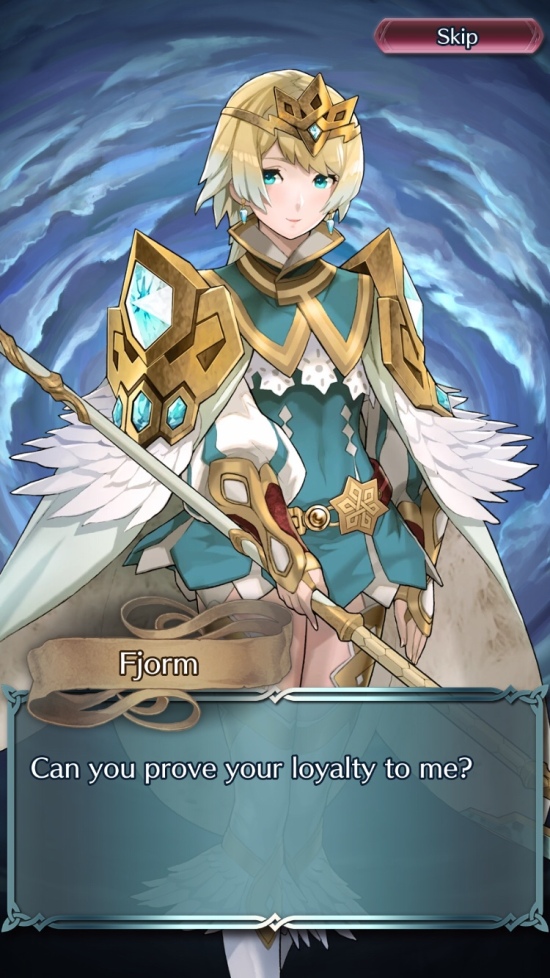 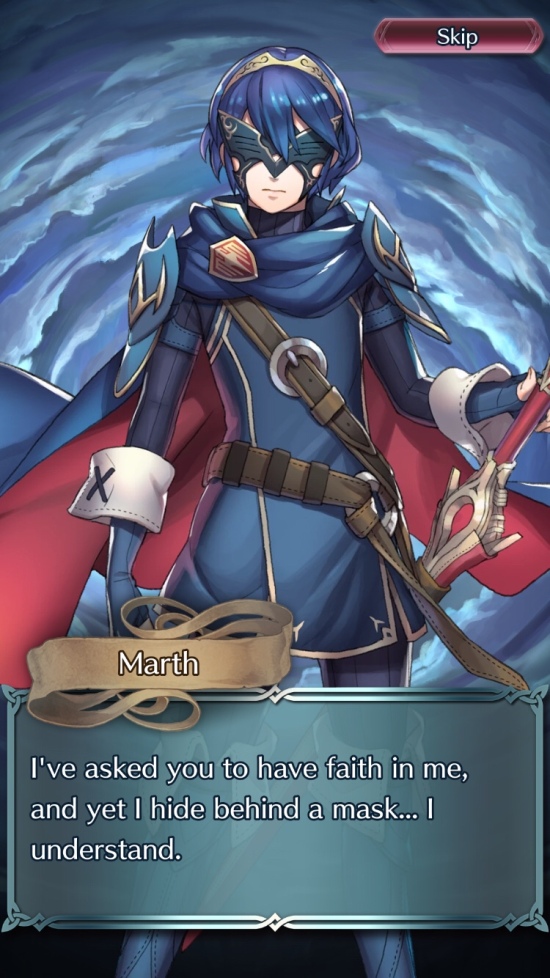 I do understand that to an extent… But let’s be real, the mask is super sweet and I would trust anyone wearing it.

Just figured I’d put that out there.

Fjorm has just one idea to prove that Lucina is a trustworthy compatriot:

But then, just as Fjorm is about to take the legendary Falchion… 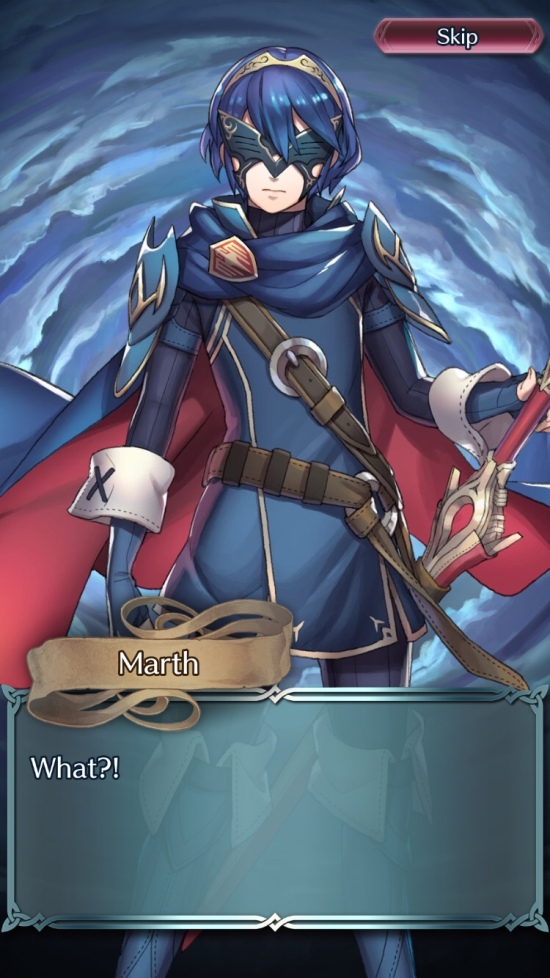 Fjorm wasn’t Fjorm all along! She was Loki in disguise once again.

From there she just says she’ll wait for you to arrive at the deepest part of the Tempest to fight her, but there was honestly just something about this plot twist I really enjoyed.

I don’t know, I guess it just worked well in reference to character traits Intelligent Systems has established thus far. You know me, I’m a fan of strong characterization.

It continues on too, considering Loki is actually Fjorm in the final battle of the Tempest Trial run.

That about covers everything I have to say regarding this Fire Emblem Heroes update.

Like I said earlier, there should be more to come in the near future when we get to the anniversary of the game’s release. That’ll be dope for anyone who pines during the downtime without Fire Emblem posts.

For anyone who doesn’t pine for Fire Emblem posts… Well… Like I said, something about the State of the Union should be coming soon. I also have a few other plans in the next couple days I’m planning on writing about, so overall there should just be some nice activity going on around here.

So, until next time, what do you think about Legendary Ike? Besides him, who else would you want to get out of the new summoning banner?

Let me know in the comments down below!