Good afternoon, world! Been a while.

It’s official, I’m an @csuf grad! Now I begin the next phase: Unemployment.

First picture features @TimSahar and @chelshernan, thanks for sticking with me for the ceremony you guys! Congrats!!

After one whole day doing absolutely nothing post-Graduation, it’s about time I jump back into the saddle for my daily writing exercises!

What better catalyst for that writing resurgence than a new banner in Fire Emblem Heroes?

… In hindsight basically anything else. Because it figures this is a banner I could give no fewer shits about.

When I say this is a post written almost purely out of obligation, I’m not kidding. Maybe it’s in contrast to my excited reactions for Berkut and Alm, but I can’t remember the last time a banner was this much of a dud for me.

When I first watched the video, I had no idea who I was looking at. Usually I’ll have heard of a character if they’re popular, but not this time around.

Sigrun and Tanith are from the Radiant games, interestingly paired with Sanaki’s appearance last year.

Meanwhile Pent and (Tempest Trial reward) Louise are from The Blazing Blade.

Both convenient gaps in my Fire Emblem knowledge.

Unfortunately, none of them have anything to their unit skills that stand out enough to make me care.

Thus, Fjorm is the only character I’m interested in because I know her and she has some interesting skills. She’s a flying healer who negates dancing and gives allies a grounded version of flier formation. That’s kind of cool!

It’s just too bad she’s the only one I care about, because that means I’m probably going to save my orbs for whatever Mythic Hero is rumored to be coming.

At least she’s the main focus of the Paralogue story. So we’ve got that going for us?

Our story begins with the Order of Heroes taking Fjorm to the Bridal festival. She’s admiring all the dresses when one bride-to-be turns out to be:

A way cuter version of herself.

Damnit Heroes, stop making me want to summon for this one character on a dud banner. I need to save my orbs.

Alfonse suggests this Fjorm may from the future rather than just an alternate Fjorm. An idea that sets an entirely new precedent? I don’t think having future versions of your timeline’s self has ever been established before.

And I’d rather not think about the Back to the Future shenanigans that might ensure if the character is summoned under those circumstances.

We follow Bride Fjorm as she gets advice about love from the new units, suggesting she’s worthy if she unconditionally loves a person or would give everything to protect them.

She says there is a person she would do that for, and based on prior experiences I can surmise she’s talking about the player character.

But this Paralogue does everything it can to cut her off.

I guess it does that because once the final battle is over, Sharena offers to be Fjorm’s wingman after she refuses to tell Alfonse who she would “theoretically” love. 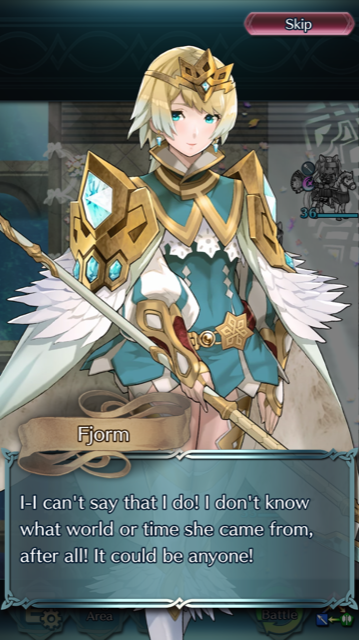 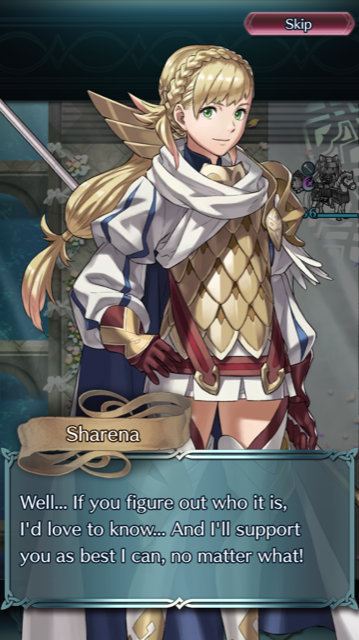 As prior experience suggests, Sharena also has a thing for the player character. Which means we’ve got a real drama-bomb building under the surface.

Because this wouldn’t be an anime gatcha game without all of the waifus being in love with you for no other reason than to incentivize spending money on your preferred smooch.

So that’s that. My cynical, bored take on 2019 brides in Fire Emblem Heroes.

I’m coming from the bias of ignorance, so if these characters are worth caring about let me know! I’d like to play through their games eventually, after all.

But for now, this is all I’ve got.

If nothing else it’s good to be back in the writing mood!

I’ll have more time to come up with things to write now that we’re in Summer Initiative take 2, but other than an official write-up on Graduation once I have my Grad photos I have no idea what I’ll be writing about.

It’s going to be a real grab bag. Look forward to that!