While I can think of very few distractions better suited to the title than a video game where I’m able to kill a gun-themed dragon with bees, Enter the Gungeon cannot keep me from doing some work I need to do forever.

Mostly because the Switch battery doesn’t last forever. Otherwise it most definitely could keep me from my work for forever.

But that being said it doesn’t, and thus I have broken away from the addiction of roguelikes to work some more on my Senior Honors Project.

I’ve taken a bit of a turn in my approach to the project as the summer starts to wind down. Originally I had been simply starting to write the novel I’m working on while using a separate outline to keep track of things (as I pointed out in a previous blog post). However, I’ve found that hasn’t worked out phenomenally well.

It mostly left me in a place where I had a basic idea of some key plot points and the main characters, but no real sense of progression to build upon. Just figuring out things as I went along.

So I’ve decided to step back from the actual physical writing and focus more on the finer details of outlining this puppy.

With those in place I think writing a novel should actually be a sensible pursuit.

The thing that I’ve found most difficult about all this is naming everything. Who would have guessed that when you’re building a world from scratch you have to name all of the things?

All the characters, all the locales, all of the lore bits. So on and so forth.

Luckily I’ve made the task easier for myself by not establishing my world as one that has very strict hard-and-fast rules. I’m not Tolkien creating a crazy immersive, new fantasy world full of completely novel interactions amongst different races.

If anything… I’m kind of piggybacking off of the work he already did years ago.

See, for those who aren’t aware, my novel is a parody of sorts. It started as something meant to emulate the ideas of a book called ‘Redshirts’ but in the fantasy genre rather than science fiction.

Then I decided to narrow my focus even further. While I don’t necessarily read a ton of fantasy novels, I do play a lot of fantasy-themed video games. Zelda, Fire Emblem, Final Fantasy. So on and so forth.

This my novel evolved into one where the focus is on NPCs in a video game who gain some semblance of sentience, realizing they are caught up in the tropes of a world created by game developers who, like me, love fantasy themes.

As well as tropes of the video game medium as a whole, of course.

Don’t get me wrong, I’m hoping not to create a boring environment seeped in tropes for the sake of it. Hopefully by the end I’ll have an interesting world inspired by and utilizing said tropes.

Because of this I’ve felt free to come up with names for things in a number of ways without having to worry about standardizing too heavily.

Looking up name generators is a good general practice for character names especially, an idea bestowed by my friend Sam who does similar things for her Dungeons and Dragons campaigns.

However, I’m also trying to look to some real life inspirations. For example, the holy order of royal guards in the kingdom which presides over the land (currently unnamed since, like I said, names are hard) is based on my mom’s name.

Or in a more fun example, one character I have is named after this glorious little thing I found at Ikea the other day. 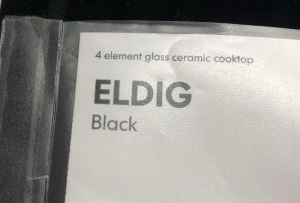 Seriously how could I not make Eldig Black a semi-significant character in my story.

In fact, just perfect for the grizzled, Old veteran in charge of watching over the prince of the kingdom. The Gunter to my Corrin in Fire Emblem Fates, or the Jagen to my Marth in the original Fire Emblem.

Because at least one faction of characters in my story is not-so-vaguely inspired by the archetypical group of traveling adventurers in the early stages of a Fire Emblem game.

Those are just a few of the ideas I’m juggling right now, trying to create a cohesive world with a web of relationships among its inhabitants.

If you’re a creative-type, I’d love to hear what kind of means you tend to use for inspiration when it comes to things like character creation. Let me know somewhere on the Internet.