Everyone’s had those moments where they hear a song — be it in the background of a T.V. show, on the radio or a restaurant backing track, or whatever it may be — and can’t quite put their finger on what that song is.

If you haven’t had that moment because you have a photographic memory or something… Well the I’m sorry to be leaving you behind with this topic.

I have those kinds of moments fairly often, as I am a fan of a range of music but am not necessarily an audiophile like my Dad and sister.

But I’m not here to talk about remembering specific songs.

Rather, I’d like to talk briefly about what I would consider a much less discussed but equally prominent concern: Identifying exactly what category it sounds like that song should belong in.

I don’t mean something like “pop song” versus “rock song” versus”country song,” or whatever the overall genre might be. This is specifically about those times where a song sounds like other songs you’ve heard before, but you can’t quite put your finger on exactly what that similar sound is.

Now. This is an odd conversation topic on my blog I’m sure, considering I don’t talk too often about the particulars of music. I tend to just stick to the generals of “my sister played a thing” if I do bring it up.

But in this case the context suggests that it’s not a thing my sister played, because she doesn’t play video games anymore.

See recently Yu-Gi-Oh! Duel Links got a major update. A much-needed one for me, as I was starting to drift away from the game.

Until they added on the next generation, 5D’s, and a novel (for me) summoning style called Synchro summoning.

Learning a brand new way to duel has gotten me right back into the swing of things. Synchros offer up an interesting level of field management that Ritual monsters attempted to hit but couldn’t, as you need to have a specific “tuner” monster on the field alongside a specific number of stars to summon a Synchro monster.

So many of the cards being added as a result are interested in flooding the field with monsters and augmenting the number of stars on a monster, that way you can summon things with specific requirements. It’s just the kind of micromanaging that makes me love to do things like deck build.

Which… Who knows, I just might do again soon.

Look out for some Synchro deck profiles, possibly.

But for right now that’s off-topic. The only reason I gave all that context is to get to the point that a new season of the anime being added into the game also means new characters to play.

New characters means new battle tracks. One in particular has caught my ear so far: 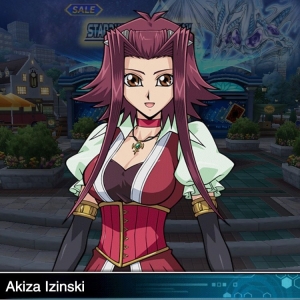 Meet Akiza Izinski. I know literally nothing about her because I never watched 5D’s.

But I do know that in Duel Links she has absolutely amazing battle music.

I have to say, as much as I like a wide range of music, video game soundtracks are definitely at the top of my list. I could go on-and-on about different songs I adore from various games.

In fact, I’ve been considering doing video game music posts around here. Just haven’t really had the time to hash out a specific style for it.

But Akiza’s theme here is a real prime example of the kind of tune I can just melt into.

The opening ten seconds or so has a plain single instrument rift that brings to mind N’s theme from Pokémon, or Moonstruck Blossom from Kirby Triple Deluxe.

Then the song continues to build until about 30 seconds in, when the real magic begins.

At that point, the piano is co-opted by some kind of Theremin-sounding track that gives everything a techno/haunted house feel.

Even when the Theremin bits disappear, the song keeps its haunting undertone despite somehow also bringing a lot of battle-ready energy to the table.

The song overall is just really well-done, and makes grinding for cards against Akiza a real pleasure.

My problem is, as much as I can (somewhat haphazardly) explain the emotions that this song elicits, it’s hard for me to place exactly what the song reminds me of. Because it definitely reminds me of SOMETHING.

There’s an air of the haunting melody underlying Lusamine’s battle theme from Pokémon, as one of the comments on that YouTube video I used mentions.

Haunting yet beautiful. Her chief gimmick appears to be monsters based on roses, so it’s an encapsulation that makes sense.

I also get some heavy Binding of Isaac vibes. Not sure why for that one. It just does.

Unfortunately though, part of the reason I wanted to write this is because I’m hard-pressed imagining what kind of other songs this song reminds me of.

So I wanted to throw it out to all of you.

Does this song bring any others to mind? What kind of comparisons would you make for it?

Let me know down in the comments, and while you’re at it let me know if you’re interested in seeing me write about video game music more!

I get very passionate about that particular breed, so I’m sure I could do it in a heartbeat.