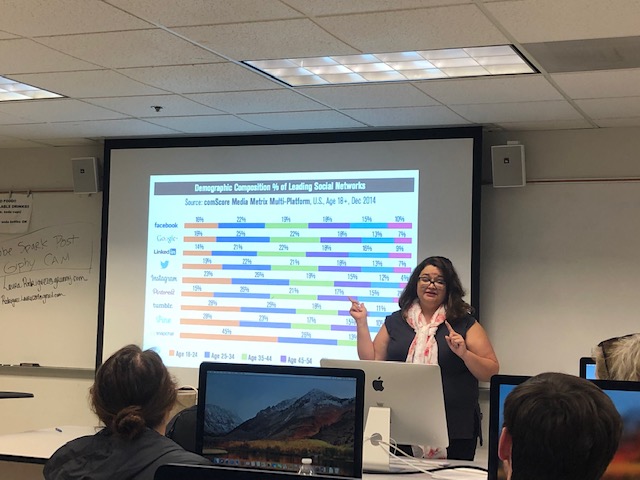 This is what we in the business call “good continuity.”

For those of you who don’t care to dive into the rabbit hole: Hello!

I’ve been our branch Secretary for a year now, but last semester the meetings conflicted with my three-hour Visual Communications class.

So this semester I’ve been better about going. Even if that means commuting for just that, like today.

Doing so has offered me the chance to live tweet a guest presentation by Washington Post editor Gene Park:

Before plugging his social media accounts and taking a photo with @csuf students and faculty, @GenePark asked @thedailytitan reporter who would be writing about the @FullertonSpj meeting if he needed any more quotes. “Titan pride.” pic.twitter.com/4X6Ai9MKJC

Then it took me on a tour of the CBS2/KCAL9 Broadcast Center.

The funny thing is, I’ve attended one of her presentations.

Last year at the ACP Convention in Long Beach, I learned about Google reporting tools like the Cardboard VR camera from Aguilar. Wrote all about it here.

Today she went over a couple of different tools that are useful for journalists to create a better social media presence on platforms like Twitter and Instagram.

The presentation started with a few general tips, despite the idea that most content is tailored to the platform.

Primarily that social media content is best if it “awe” a viewer, provides them “laughter and amusement,” or instills some sense of “empathy” and “surprise.”

Then I jotted down this quote about how social media should be used to connect with people:

“When you’re looking at your device late at night before bed, people want to see personal content,” Aguilar said.

Personal stuff is particularly effective when it’s visual, so she spent her time teaching us about two apps anyone can access on their mobile devices.

If you’ve spent a lot of time on social media or digital news sites like Now This, you’ve likely seen the kinds of images with text overlays that Spark Post is good for.

Because CSUF students have free use of the Adobe Creative Cloud, we were able to practice creating our own.

For the purposes of goofing around, I reused this image from my post-Us Twitter freak-out:

I’m actually feeling really exhausted, and am going to take the night to chill with a nice cup of tea and Joe Cool.

But tomorrow. I will have words on #UsMovie. Because regardless of the audience, I have good things to say about @JordanPeele and @Lupita_Nyongo. pic.twitter.com/DJQr6vGJp9

And reimagined it as this baseless Peanut’s fan graphic:

I think that resource is pretty neat, but mostly because it’s good for cropping images to dimensions used by specific social media sites.

Dunno about that… I’ll let you know if I get more than just four likes on the post I made using it.

What I can see as being more useful to me in the long-run was her introduction to the GIPHY CAM app.

See, I’m a man who likes a good GIF — and I pronounce it both ways, so don’t bother asking.

I’ve always been interested in making my own, but never enough to seek out good ways to do so.

When I’m on my phone, this app seems like a pretty decent approach.

For instance, check out this practice GIF I made attempting to create a looping image:

Isn’t it amazing how I’m not only chubby, pimpled, clearly sleep-deprived and unshaven, but also that I couldn’t get the camera to sit perfectly still even when I had it propped up on a table?

I love that about myself.

Probably not the most successful first GIF attempt, but now that I know about this app I can get more practice.

Perhaps one day I’ll be skilled enough to make silly comic book GIFs in a big news story like this UFC girl piece from Medium Aguilar showed us.

Funny enough, this SPJ meeting was held in Professor Frank Russell‘s Comm 201 class. There was an issue booking the Titan Student Union.

Almost three years ago I first started my Twitter account in 201 because he required it. I’ve come to both thank him because it taught me a lot about social media, but also resent him after spending hours mindlessly scrolling.

Now that I’m about to graduate, it looks like I’m still learning new things about social media with him. 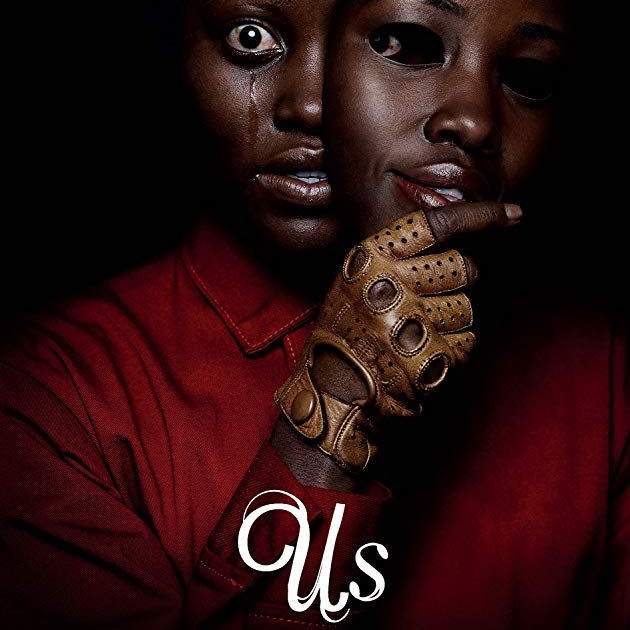 I don’t typically go to the movie theatre to see horror movies.

The last time I did, I watched the Blumhouse classic Truth or Dare on a date. Horror movies peaked in that moment, and I decided I never needed to see one on the silver screen again.

Just kidding, it was a dumpster fire.

It also had nothing to do with the reason I don’t see horror movies. I’m just a baby when they’re done right.

But I loved Jordan Peele’s Get Out, so when Us was coming out and my friends Juan and Nina were interested, the perfect opportunity to support this great filmmaker arrived.

Before I jump into the movie, I’ll briefly address the elephant in the room: I had an awful experience watching Us. Won’t go into too much detail because you can read through my angry Twitter thread.

I just think it’s worth mentioning because I enjoyed this movie, especially talking with my friends about it on our drive home, but I wasn’t as enthralled as I could have been.

That said, there’s plenty of objective things I can say about this movie.

Us follows the Wilson family — Adelaide (Lupita Nyong’o), Gabe (Winston Duke), Zora (Shahadi Wright Joseph) and Jason (Evan Alex) — as they vacation in Santa Cruz. Adelaide’s nerves get the best of her as she recalls coming across a doppelgänger of herself at the boardwalk’s hall of mirrors over thirty years earlier.

Her fears are justified when a family of doppelgängers, each deformed and known as the Tethered, arrive to torment and kill them.

There isn’t a whole lot else I can say without spoiling the film, yet there are a couple of major plot beats that I feel are worth addressing. Some of you may consider them minor spoilers.

Most notably that compared to Get Out, Jordan Peele’s newest movie is a bit more predictable. If you’re anything like my friend Jonathan, you can probably guess the explanation why evil clones suddenly arrive.

That being said, the way the story is handled completely supersedes that complaint. Peele’s world and characters are so engrossing that you almost don’t care why the Tethered have arrived until it’s explained.

Even with the explanations given, there’s a decent amount of mystery left on the table to keep viewers mulling over questions. That’s clearly the intent.

It doesn’t matter why certain things happen so much as it matters that things are happening and the characters need to deal with them.

It’s great that Peele has created such an interesting scenario that you want to know more after the movie cuts to black, but you don’t NEED to know more to enjoy it.

Beyond this mysterious lore, Us has two other major draws: The cinematography and the acting.

From the opening scene of a young Adelaide wandering the hall of mirrors on the Santa Cruz boardwalk, it’s clear that Us is a marvel to watch. Tension mounts immediately just trying to figure out which girl (and which exit sign) is real.

There are scenes all over the movie that stick with me. From Nyong’o’s Tethered character Red slamming Adelaide’s face into a glass table, leaving her reflection shattered, to the first reveal of Tethered outside the Wilson family in a gruesome scene.

This movie is more of a slasher flick than a horror/thriller at times, and it handily capitalizes on all of the blood-gurgling imagery and sound effects you’d expect.

However, arguably the best scene comes toward the end, where Nyong’o’s bug-eyed, Tethered face is large in the foreground as the grounded regular version is creeping up with a fireplace poker.

It’s gorgeous to watch, and highlights just how amazing Nyong’o is in the movie.

Besides perhaps Alex at times (who I would give a pass being the youngest actor in the movie), everyone nails playing the duel versions of themselves — in some ways completely alien, but in more ways amplifications of each other’s good or bad sides. I particularly liked how Duke captured a hulking, imposing monster of a man and a crippled, goofy family man.

I’ll frankly be upset if she doesn’t at least get a Best Actress nod for this. Nyong’o became a real powerhouse to me with Us, much like Daniel Kaluuya after Get Out.

Hers is the only Tethered that speaks, and every word comes out hoarse as she struggles to talk. It’s a bone-chilling performance, especially combined with her rigid, mechanical mannerisms.

The fact that she plays that intensity against a normal, terrified version of herself makes it stand out that much more.

A lot more of my negatives with this movie come from my viewer experience — laughter at inappropriate, tense moments and Instagram glowing two rows ahead does not mesh with suspenseful horror. So it’s hard to tell what parts I didn’t like for the movie or for the audience.

But I can absolutely say what I enjoyed about Us, even if I’d like to see it again. The cinematography is great, the acting is amazing and any sort of plot hole or missing lore just serves to create a captivating and mysterious experience.

I’m certainly still thinking about ideas the movie posed, and how some reveals completely re-contextualize the movie — one of my favorite things in film.

And that’s not to say anything about the killer Bernard Herrmann-esque score by Michael Abels.

Us is a great movie, and a wonderful second showing for Peele. I would highly recommend it (even if you wait to see it in the dark at home).

Yet it offered one thing more shocking than anything else:

How the hell did Jordan Peele context switch between directing such a suspenseful, deep horror film and goofy high jinx voice acting for Toy Story 4?

The man truly is an enigma.