If you saw my last post about the article I had published today, you’ll know that the fall 2016 semester has started for me, the first semester that I’m serving as one of the editors for the News page for Cal State Fullerton’s Daily Titan newspaper.

Toward the end of the summer there was a little bit of stress building up at the thought of having new responsibilities on the paper, ones that would make me accountable for not only large amounts of content needing to be created, but also for the grades of students taking Comm 471 (The Daily Titan staff writing capstone class for Communications majors) and, more importantly, for making sure the issues present on campus get addressed.

I probably won’t be writing a long post about every issue we publish considering there’s going to be four issues a week starting in a couple of weeks, but the first deadline night we had was pretty special, so I figured I would ramble a bit and talk about the struggles of putting together a college paper.

This particular issue was special in that it was a week-long issue, so we only had our Sunday production and not our usual Monday, Tuesday and Wednesday productions.  Just because we have a lower workload as a while this week doesn’t mean the deadline was easy, however.

We finished production on this issue at 2 A.M. this morning, the morning of our first day of class for the semester.  The night ran that late – early? – despite the fact that a few of us on the editorial board arrived three hours early to get work done on the paper.  If that doesn’t tell you about what kind of issue it was, I don’t know what else will.

While the work was long and tough, the end result is always sweet to see in print.  Especially when I have friends living on campus who will message me about my name and work being on the front page before I even get up to get ready for school.

Now, there were a few overarching problems plaguing our deadline night from the offset that I would argue were the main contributors to the 14-15 hour runtime.  For one thing, we got a little screwed over as far as advertisement space goes.  Normally we get quite a few ads from the Ads department to fill up room on the admittedly large print space for the paper, but we got nearly nothing for this issue.  As a result, it took far longer to figure out how to stretch our content into the space we had, a burden mainly on the Layout desk that clearly seemed to take it’s toll.

We also had a fairly sizable group of “new recruits” that had to learn the ropes of being on the paper, as actually working on the paper is a much different experience than talking about it through orientation.  Finally, there were some technological updates done prior to the semester starting that caused problems with printing pages and opening things on certain computers in the newsroom, extending the wait time for finally sending the final paper to be printed by quite a bit.

While there were overarching problems affecting the paper as a whole, there were also some issues specific to stories in my own section.  First and foremost, the stabbing story that fills the top banner on the front page.  Out of all the exciting ways to start off the semester, two students getting stabbed the morning of the deadline is certainly pretty high up there.  We obviously had to do some last minute coverage on what happened, and even with two reporters working on the story it wasn’t able to be completed until later on in the night thanks to some difficulty with sources and Fraternity politics.

Megan Maxey’s story on the Poverty Simulation for Nursing Students suffered a similar last minute deadline story fate, and my own story about the TSU and Western State College was very, very long, requiring some last minute word cuts even with the extra space we had from a lack of advertisements.  You also may have noticed that I wrote all three of the briefs on the inside edge of page 2, a symptom of a lack of people available to work.  They’re not necessarily hard – just 100 words on a story we’ve found online – but still.

The last big challenge of the stories in the issue was the story Jillian Salas wrote about CSUF President Mildred Garcia’s Convocation Address.  While her work was perfectly fine in its own right, I personally screwed up the coverage a little by forgetting to send a photographer to cover the event.  Without our own photos, we were stuck either having to use courtesy photos (something we don’t use on the front page) or creating a graphic to address the four points of CSUF’s Strategic Plan – a major talking point in the President’s speech.  Obviously we went with the former, but even then trying to fit it onto the page was a bit awkward and we needed a very large photo caption to help fill the space.

Finally, we came to the problem of story headlines.  Now inherently, headlines aren’t such a terrible thing.  They’re quick and meant to describe the content of the story it accompanies in some capacity.  The problem comes when there isn’t a lot of room to write a headline in, making it harder to find the right words to use.  That’s not all either, for stories on the front page that bleed into another page – such as Garcia’s speech and my buildings update – you need to make two headlines that have to be totally different in content.  Add to that a third “deck” subheading that also has to be different than the other two and you wind up struggling to come up with a variety of things to say.

Why the guide wasn’t passed out during the actual NSO over the summer that we created it for is beyond me, but here it is included along with our first major production for the semester.

While the creation of the guide is admittedly more of a way to sell a lot of ads to kick off the semester, it does have a few articles written by members of the Daily Titan Editorial Board.  More fluff stories than hard news, but technically it was meant to come out well before the semester started, so there was understandably not all that much to cover.

A bit of pride I personally draw from the NSO guide comes from this page, which depicts a map of the places you can park on campus and a few advertisements.

Typically we have our Layout editor and his assistants put our page’s structures together, but for the NSO guide the ads department did most of the initial work.  This page, however, was incredibly awkward in how it was first constructed.  There was very little room for the map, and the way our illustrator made the image itself didn’t lend itself to the space we had.  So, while our Layout editor was off doing other things, it was up to someone else to help try and put the page design together.

That someone, if the build-up didn’t make it obvious, was me.  I was able to show off the skills I accumulated through my editorial years on RUHS’s High Tide newspaper by editing the page design so everything could work, and I greatly impressed the Editor-in-Chief and Managing Editor as a result.  All and all not a bad thing to do.

If nothing else, probably the best thing I can say about our deadline night last night was that it was a wonderful bonding period.  Now matter how frustrating and drawn out the work tended to become, at least I was suffering with friends who were all going through the same thing.  On top of that, things like lunch/dinner and the inevitable delirium that snuck in once the witching hour came around made for wonderful chances to get to know the people I’m working with better, especially those who are going to be helping out at my desk.  Even though CSUF is a commuter campus, lots of people still like to give me skeptical or disappointed looks when I mention that I’ve been a commuter since day one, having not decided to try the on-campus dorm experience for my undergraduate life.  It’s mostly a monetary concern that led to the decision in the end, but most people cite the lack of connection to other people at school as reason why it was a poor choice.  While I can understand the concern, I’d argue that my early and ongoing level of involvement in school institutions like the Daily Titan really offset them in a big, bad way.  I am involved and making friends, and I probably spend more time on campus than a lot of other people who don’t live there – so who cares if I decide to save a little extra money in the meantime?  Besides, having some extra quiet drive time is nice if you ask me.

However, there is one final thing of note about this particular production that I think is pretty amazing: 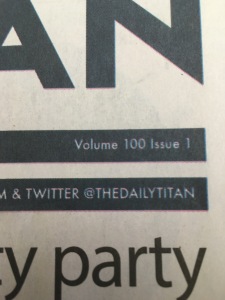 This semester’s run of the Daily Titan is the 100th volume.  The paper has been around for 50 years and runs two volumes for the fall and spring semesters, thus we’ve reached 100 volumes.  It’s a heck of a milestone for the paper as a whole, for sure… But what stands out about it most for me is that I get to be a part of the hundredth volume.  My (admittedly very long) buildings update story is part of the front page for the first issue of this special milestone.

And that’s pretty amazing to me.

As another slightly unrelated note, one thing I learned from being at the CSUF campus late is that all the Team Instinct players like to take command of the gyms in Pokémon GO when they know nobody will be awake to overturn their rule. Plus, it’s a really good place to find some real life Pokémon at 2:30 in the morning.  Just saying.