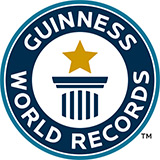 44-year-old Jason Camberis, who builds and sells arcade machines and security systems for a living, was interviewed in 2015 about his massively scaled arcade cabinet, which appears in the 2016 Guinness Book of World Records.  The machine is actually functioning and plays over 200 classic arcade games, including PacMan and Dragon Spirit.

The machine itself “stands taller than a fully grown African elephant” at 4.41 meters tall and 1.06 meters deep.  According to Chamberis in his interview with the Guinness Book of World Records, “It brings you back in time to when you were young and you were a lot shorter and you felt that whole experience of being in front of a video game, where you’re looking up and grabbing the handles and playing the game – being in the game.”

While I personally grew up in an era where video game arcades were mostly phased out of popular culture besides in novelty, thanks to the advent of home console gaming, I have spent a good amount of time playing classic arcade games in various ports and in arcades in places like Round Table Pizza.  Even if I hadn’t had the chance to play these games however, just the idea of an arcade machine that large is still astounding both in sheer scale and in ideological dedication to the foregone gaming world.