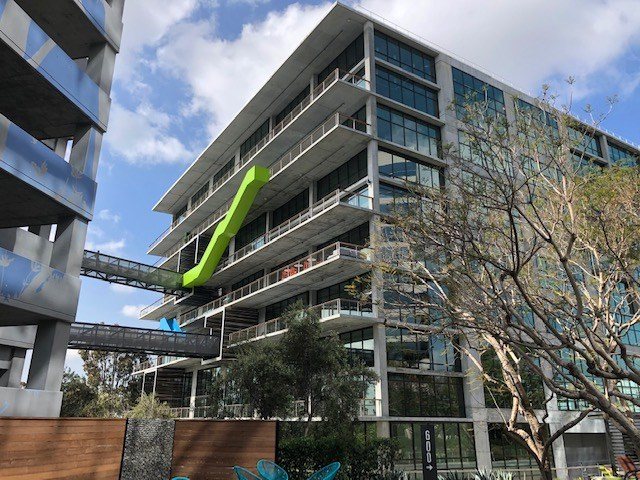 If you’ve been around my blog long enough, you know I have a thing for interesting architecture and industrial design when I see it.

The prior was on full display when I went to Pasadena City College for one of my sister’s auditions, while the latter was best seen with this weird and pointless piece about hedges around lumber yards.

You know that one was early in my ‘write every day’ commitment because of how picture-less it is despite the visual topic.

It was also my first mention of Wizard of Legend, which is neat considering I’ve gotten into playing it recently!

The point is, those related interests converged today as I joined a few other members of the Gladeo team for a video shoot at the Dentsu Aegis Network office in Culver City.

Dentsu is a digital marketing group that helps advertising firms secure locations for their product.

Or at least, that’s how I understand it. To be honest I was somewhat disconnected from the filming process because our conference room was so small that I couldn’t watch my on-air reporter Katelyn do her stuff without being in the shot.

I did carry camera equipment, and help craft the video’s message while laying out fair use policies using my Comm Law knowledge during our break — over a delicious pork belly grilled cheese.

Speaking of, the Rice Balls of Fire food truck was a strange combination of Korean, Japanese and high school cafeteria. But it was delicious. So there’s a plug.

But I’m not here to plug food trucks. If my Featured Image didn’t make it clear, I’m here to talk about the bizarre and interesting office! 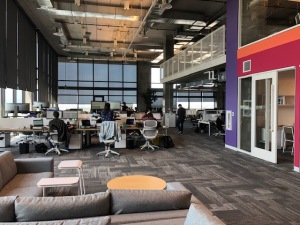 Get this. You have a marketing group on the fifth floor of a building that intentionally looks half-finished. It’s a totally open floor plan with few offices and conference rooms (much like Fandango). From the ground you can only access the area with a key card, but if you park in the adjacent structure you can simply walk across a bridge and enter.

A bridge that wobbles in the wind. Very disconcerting when six people simultaneously figured that out while carrying rented camera equipment.

Oh and there are games scattered all over the room, from giant Jenga to foosball.

Though my favorite was this giant chessboard in the courtyard outside: 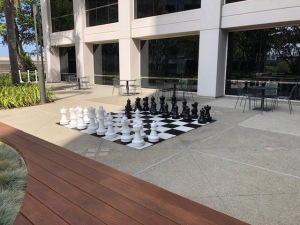 Overlooking the space was a second story balcony, on which I found this cheeky little blue bomber surveying the scene:

Apparently Dentsu worked with Capcom on getting a Mega Man cartoon series put out in the West.

Which is great, because context makes everything better.

… Though I would have been okay just assuming someone in the office is a huge dork.

This place probably has the most Silicon Valley mentality I’ve ever seen. Considering it’s a business focused on digital marketing I suppose this makes sense, though it was still kind of weird seeing it in Culver City of all places.

That said, I’m not sure I would be too opposed to working there. It’s a nice space, even if open floor plans are still a weird concept to me.

And that’s about that. I wanted to end on a photo of the Gladeo folks together, but they have not been posted.

So instead you’re getting this awkward, stilted cut-off.