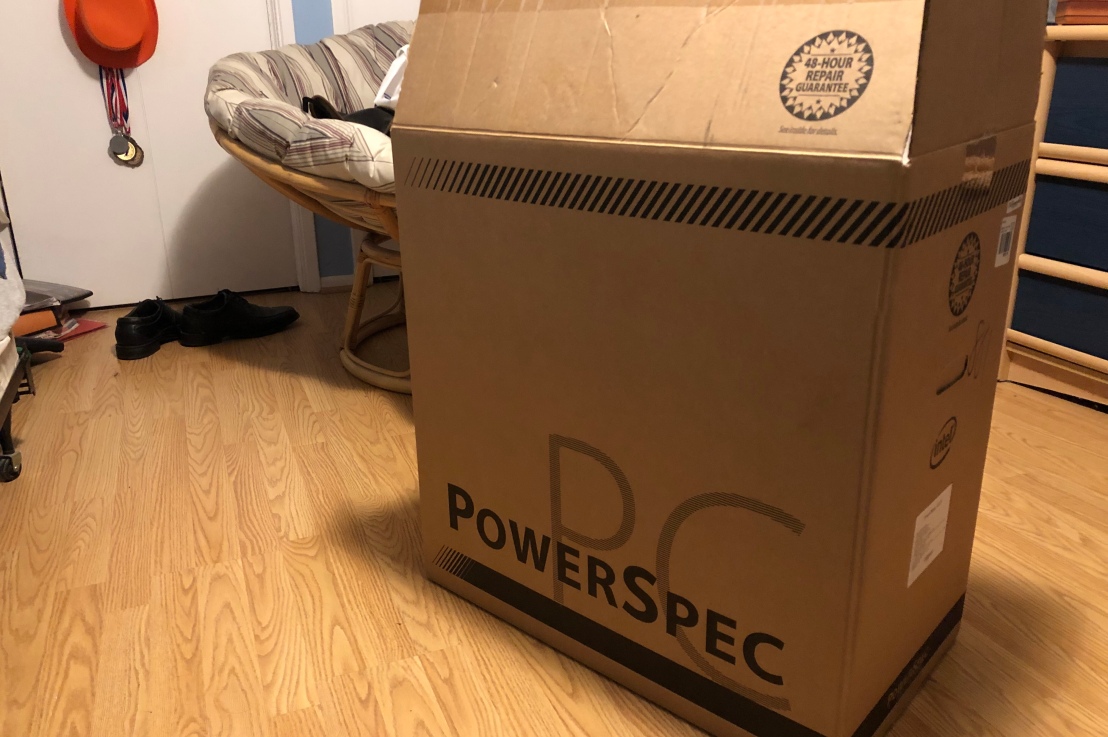 I had a few friends over this afternoon as a last-ditch hangout for Winter Break. Back to school Tuesday.

We watched a couple of movies together. Mortal Engines was a total dumpster fire. Then Isle of Dogs was a decent palate cleanser in spite of it being super weird.

However I’m not planning on talking about either in heavy detail today. Nor am I planning on going back to talk about Green Book, as I mentioned in my Fantastic Beasts post yesterday. Though out of every movie I just mentioned, Green Book is the one you should see.

Though if you hadn’t gathered it from the leading information on this post, instead of talking about movies I have an update on something totally different.

A few weeks ago I wrote about getting a computer for Gladeo stuff. I didn’t touch it for a while because the semester got busy and there wasn’t a lot of space in my room to fit a new PC.

But when I cleaned my room recently, I pushed back my TV cabinet so there would be that necessary space. After that I wanted to sit down with my Dad to set the computer up, but there have been various waves of sickness running through the house.

I didn’t expect all of that to come to a head tonight. I simply underestimated the drive of my friend Juan, who is super into computers. Like builds his own PCs from scratch.

Which sounds familiar if you remember my Bumblebee review, I’m sure.

When I first got the machine he asked about the specs, but as someone who doesn’t pay that much mind I wasn’t even really sure where to find them. Time went by and we all kind of forgot about it.

But then we went to grab something in my room tonight, he caught sight of the machine and started to look it over. One thing led to another and soon enough part of the hangout turned into setting up computer time.

Turns out that extra space I laid out works pretty well for what I need:

Even though I might not keep the extension cords squished between the machine and my desk, I’ll have to decide later.

In the meantime we booted this thing up and decided to take a look. 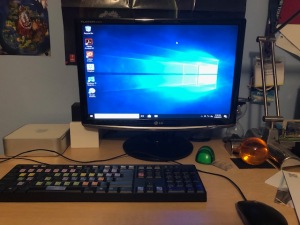 Check out that pretty display. It’s certainly a step up from the desktop Mac that was there before, which I might not ever have to plug-in again considering I took everything that I wanted.

So now I have a brand new computer to toy around with as the spring 2019 semester begins.

… Or actually, perhaps not so soon. Apparently the machine can’t connect to wi-fi, and we might have to figure out a different way to get the thing online.

I’ll have to sit down with my Dad and look things over later. Maybe tomorrow.

For now I’m going to go back to waiting on that super blood moon and watching Bob’s Burgers with the crew. Because god damn that show is funny.

Because I’m on the cusp of starting the last friend hang out of the summer, I’m probably just going to make this post quick and dirty so I don’t have to think about it later when everyone leaves.

Figured what better thing to talk about than the reason I’m so tired right now?

See I went to bed relatively early last night because, as mentioned, the gang is getting together today. Wanted to get some extra sleep to prepare for that.

The world apparently had different intentions.

Right around 2:00 a.m., I woke up to the sounds of very loud arguing just outside my house. At that point I was pretty groggy and didn’t think too much of it, but whoever was out there really wanted to just go at it.

It became much harder to ignore when the police sirens kicked in. Someone must’ve called in a noise complaint, I figured. So by that point I got up and went to look out of the window upstairs.

Thinking it may have been more than a noise complaint considering six police cars showed up.

Naturally I went to see if my parents were cognizant enough to wake up and come see, because at the very least they would have been interested in checking out whatever was going on from the distance like I was.

They were not. So they’re probably going to find out that all this happened from this blog post considering I wasn’t cognizant enough to tell the story this morning when they left to do chores.

That being said I don’t personally know what happened very well either, so I suppose I don’t have too much to share. From the distance I was able to hear just a couple minor things, as the three suspects were turned away from me. The most significant thing I was able to hear was that none of the three of them had a knife.

One of the guys was super insistent that none of them had a knife. So I’m assuming something about weapons was involved in the 911 call.

Just before 3:00 a.m. everything seemed to mellow out. It seemed like some of the suspects were brought away, leaving their red car in the middle of the street.

Around that time I was able to pay a bit more attention to the police officers as they gathered together to chat.

Wanted to point that out specifically because just. 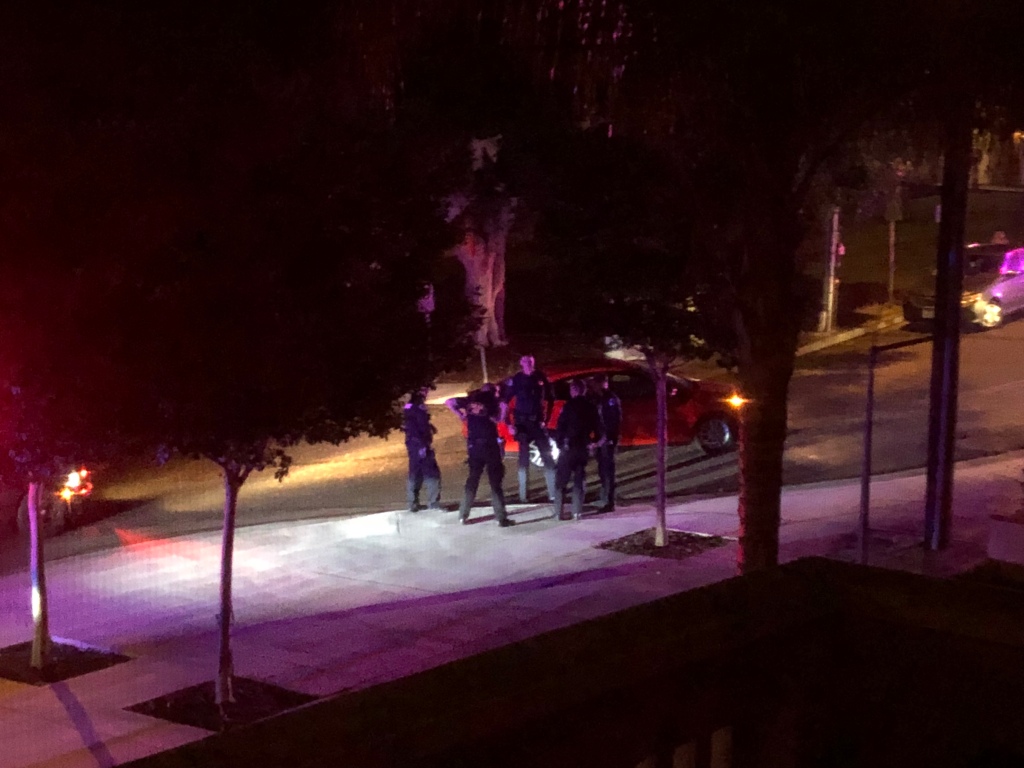 Look at this guy in the middle. He’s so god damn tall.

I honestly thought Slender Man was a police officer in Redondo Beach for a while there. The fact that he’s that big while also standing off of the sidewalk ledge that everyone else is standing on is just.

But anyway. Eventually they all parted ways, cars skidding around as they went off to address other crimes. Except for one car that hung back until a tow truck showed up to bring away the red car stuck in the middle of the street.

While I mostly put this post together just to say “whoa some wacky stuff happened in Redondo this morning,” I also thought it had a somewhat interesting conflation with my reporter life.

Because I genuinely considered going out and asking the officers what was happening. At least for my own curiosity, but potentially even as something that could be a freelance article for… I don’t know, the Daily Breeze or something.

In hindsight I likely wouldn’t have gotten anything from them since I don’t have credentials for any newspaper and it might come across as me impersonating the press.

But that’s hindsight. Honestly the reason I didn’t do it was because it was 2 a.m. and I was super tired. Plus I didn’t want to get dragged into things as a potential witness to whatever was happening considering I didn’t actually witness anything.

So yeah. No serious reporting. You just have to deal with these mad context-less ramblings.

That said, consider it the potential for future reporting. Because I pay attention to crime things that are happening and newspapers appreciate that.

Anyway that’s all I had, so I’m off to hang out with my friends. Hope you all have a good Sunday!