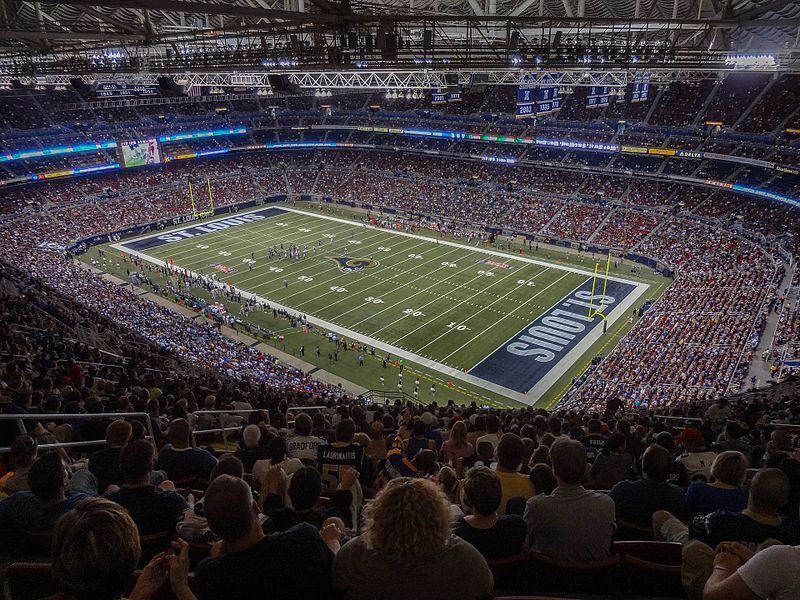 Gotta ride that SEO wave, am I right?

I kid of course. Out of all the blog posts I’ve ever written, a football-related piece is far from the one I’m looking to blow out of the park.

It just so happens that the only thing I’ve done today beyond researching history for my novel is watch the Superb Owl. So as much as I could care less about football, it might as well serve some kind of grander purpose.

Even though that grander purpose was definitely not to get me more invested in the sport.

Because hoo boy, I’m not a fan and even I could tell that Super Bowl 53 was lame.

The game was tied up 3 – 3 from field goals alone until the fourth quarter. There the Patriots scored the first touchdown of the game and a subsequent second field goal to end things 13 – 3.

As much as I couldn’t care less, at the very least I figured I should root for the Rams considering they’re a Los Angeles team. It’s just too bad they lost after an excruciatingly boring game.

The commercials weren’t even that special, making it so the one reprieve from sportball didn’t balance out the boring game.

Probably the best spots were the brief Avengers: Endgame trailer right before the game started, the Bud Light commercial that turned out to be an ad for Game of Thrones in disguise (gotta give HBO a shout out for that majesty) and the Washington Post ad narrated by Tom Hanks toward the end.

As someone going into journalism I figure I should be happy about them spreading the good word, even if I do think it was a weird promotional gimmick with a whole story about the fact that they put out an ad in the first place?

But you know what. I’m at least a friendly acquaintance with Gene Park, who does social media stuff for the Washington Post, so I won’t complain about his business.

So okay. The game sucked. The ads sucked. What about the Maroon 5 halftime show? That had to be something good, right?

After all, the NFL was planning to do good on a petition for “Sweet Victory” from the Spongebob Squarepants episode “Band Geeks” to be played in honor of Stephen Hillenburg dying a few months ago.

They couldn’t have messed that up, right?

That 5 second Spongebob cameo vs the rest of the halftime show. pic.twitter.com/eaXPco9Njx

Current state of the internet pic.twitter.com/qAEIpLW6Uj

Let’s just say the concept was much better than the delivery.

Even I got in on the fun with my own hot take:

Who’s decision was it to actually go through with referencing the Spongebob “Band Geeks” episode during the #SuperBowl but only play the trumpet lead-in?

At the very least they could have put Adam Levine in a dome full of water.

If anything, I suppose this was my favorite part of the Superb Owl this year. Never before have I been ‘invested’ in the game enough to watch it carefully and follow the Twitter reactions as a result.

We’re going to talk about it this week in my Gaming class, so I figured I should pay attention.

Seeing the Internet lose its mind over the Spongebob debacle and a select number of commercials was more fun than I’ve had on social media in a long time.

However, that wasn’t the most fun thing about the game.

That honor, of course, had to go to the feast: 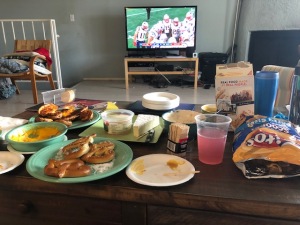 After a rough weekend, it was nice to take a little time to relax and pig out with lots of junk food.

Even if I’ll definitely have to hit the gym a few times this week to make up for it.

So anyway, that’s my sport-related content quota for the year. Anything else from here on out is pure overtime. Look forward to maybe that!

I want to put more effort into the post with my thoughts on classes this semester, so I’ll be saving that for tomorrow.

However, today I’m going to sort of ruin that by spoiling my thoughts on the class I’m looking forward to most.

All in service of discussing an existential crisis it has delivered unto me.

While most of my classes are wrapping up my Comm major, Psych minor and Honors distinction, one in particular stands out as being taken purely for myself.

I’m no stranger to the American Studies department, as I did take an AMST course on  American Character during sophomore year. Yet that was mainly to fill a general education requirement.

I took Gaming in American Society simply because I adore gaming. Plus I have 21 years of experience in American society, I suppose.

After one class I’m already convinced taking it (as per the recommendation of my friend Mimi) was one of the better decisions I’ve made in my college career. Especially as a final semester swan song.

It’s a 400-level course with a good amount of “dumb fun” elements to the curriculum given its subject matter.

Our novel selection includes Ernest Cline’s Ready Player One and Orson Scott Card’s Ender’s Game. We’re also watching a whole host of movies including 1983’s WarGames and 2012’s Indie Game the Movie, all about the development of titles like Super Meat Boy and Fez.

In other words I’ve already consumed a large chunk of the required materials.

The stuff I haven’t yet consumed seems plenty interesting in its own right, even outside of the bias that comes from knowing they stand in a pantheon of enjoyable media.

Hell there’s even a day where we’re just going to spend our three-hour class just playing Dungeons and Dragons. How sweet is that?

Another objectively cool element of the class is that essays are replaced by a long-form research project where we get to choose a game to analyze. Then the three papers we write will be pulled into one mega-paper as our final.

As someone who writes pseudo-game reviews on this blog and actual reviews for papers like the Daily Titan (big Nintendo hitters like Mario and Kirby at that), I should arguably be the most excited for this portion.

Yet I’ve hit a conundrum.

How the hell do I pick just ONE video game to analyze when I could arguably do it for any of my favorites?

Should I analyze one of my favorite nostalgic games of all time, like Pokémon Crystal?

Or for that matter one of the objectively better Pokémon games, given it is my favorite video game series. Perhaps Heartgold and Soulsilver or Black and White 2?

Maybe I should pick a game with more of a cultural impact considering I’ll need to write about its wider historical context. I could potentially use Ocarina of Time (or its 3DS remake), as much as games of that caliber have been analyzed to death in the past.

The Nintendo fanboy in me could downplay itself as well, leading me to analyze a game I enjoy but haven’t spent quite as much time with. Kingdom Hearts 2 or Simpson’s Hit and Run on the Playstation or even something like Don’t Starve or FTL as indie representation out of Steam.

That said, I could pick a game I straight up haven’t played before just to get a fresh take. Final Fantasy 7 has been gathering dust in my Steam library for a long time, and I do want an excuse to finally play it.

Even with all those options in the abstract, my mind did immediately wander in a particular direction when I found out about the assignment.

Recently, especially with the advent of the third Choose your Legends event in Fire Emblem Heroes, I’ve had the desire to go back and play Sacred Stones. My first and favorite Fire Emblem game.

Part of me couldn’t help but think about an interesting analysis coming out of Sacred Stones due to it being the first title released after Fire Emblem’s western debut.

… I was admittedly primed to go in that direction from watching The Geek Critique’s assertion that Smash Bros. Melee was a “kingmaker” for their series the other day.

That’s my most developed idea at the moment, but frankly I’m more than open to coming up with more in the weeks to come.

There are simply too many good games out there in need of analysis.

So I suppose that brings me to a call to arms of sorts. If any of you have ideas for a game I should try to analyze for my research paper (assuming it’s within my means), let me know somewhere on the Internet.

It’ll definitely be taking an unreasonable amount of my brain power for a good long time.