Today the Rochlin clan made its way up into the Santa Monica hills for a day trip to the Skirball Cultural Center.

For those of you who aren’t aware (as I wasn’t before our trip today), the Skirball is a Jewish institution opened in 1996 that, frankly, is quite beautiful. Right next to Mulholland Drive and… Well…

Just look at this patio. There’s plenty of fancy little resting places like this all over the museum.

It’s also, to their credit, very handicap accessible. Which is quite important for us since my dad had foot surgery a while back.

But that’s another story, because I’m clearly not here to talk about my family medical history. I’m here to show off all the cool pictures I got walking around a bunch of different exhibits!

I’m splitting up my slideshows in order of the exhibits we looked at this time around, so that said I hope you enjoy this little look into a place you might not have heard about.

I’ll be blunt, I’m not great with names that aren’t in constant circulation through the circles I follow. So off-hand I couldn’t have told you who Leonard Bernstein was despite the apparent long legacy there.

Of course you bring up West Side Story and the New York Philharmonic and it all essentially slides into place. Especially since our family has apparently been on a WSS kick after that play we attended a while back.

Still, Aly would be most disappointed that I don’t know music people super well.

Again, besides the point. We’ve got pictures to look at.

Or, as an alternative introductory picture: 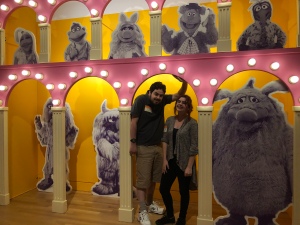 Alright here’s the part we were all here for. Mr. Bernstein was a nice appetizer, but if there was anything that was going to get me out of bed early this morning, it would be Jim Henson.

We all love Jim right? I mean how could we not.

Though it might be partially attributed to all the build-up that led into it, the Henson portion of our day at the museum was definitely the coolest. Not only were there actual puppets (Muppets? Though more than just them) all over the place, there were also behind-the-scenes paraphernalia like scripts and storyboards for different projects.

Those were particularly cool in my opinion.

But don’t just take my word for it, check some of it out for yourself:

Now we move into the Judaism portion of our tour. Over on your left you’ll see a brief history of the experience of my ancestors from ancient times to their transition into America.

This area was the most fleshed out portion of the museum for… Well, obvious reasons.

As a Jewish Cultural Center, this exhibit was the one thing at the Skirball that’s always available to the public while the other pieces rotate out.

Anyone with an eye on history would enjoy walking through the different descriptors of timelines, holidays and culture. However, the thing that stood out most for me was all the artifacts.

I don’t think I’ve seen a larger collection of Torah, Menorah or other household antiquities together in one place. Everything was really pretty — unless it was more of an oddball. Like the Menorah shaped like a cactus.

Check it out, along with other wicked things like an actual full-scale recreation of the Statue of Liberty’s torch arm, here:

Now over on your right you’ll see the much less serious portion of our trip through the Hebrew arts.

The Noah’s Ark side of the museum was pretty heavily built-up as well considering it was the one portion that we needed to reserve a time to get into it in advance.

Unfortunately it wound up not actually being an informative, historical look at the story of the flood. No sort of deeper examination into whether actual evidence existed or any sort of intellectual approach of that caliber.

No, Noah’s Ark was a play place for young children.

While it wasn’t exactly a place meant for us to enjoy, there were some pretty cool things about it. All of the animals on the ark were interactive or made of some wacky material that all contributed to a very interesting style overall.

Seriously check out some of these animals. Lord knows a few of them may just be in your nightmares tonight.

While I had a great time at the Skirball with my family, I’m a little exhausted after doing that museum visit alongside a trip down Mulholland, a stop at Mambos for a Cuban lunch and a half-a-dozen other different things this afternoon.

This would have been up way earlier if not for that… So I’m not going to waste too much time concluding things.

Mostly I wanted to take this last opportunity to point out a couple of funny things we found in the museum’s gift shop. Because yeah the super pretty collectible glass Menorah and Jim Henson puppets that were available all made for lovely gifts. But they’re also way less funny then some of the random novelty goods.

For example, this series of books.

You know. For when you want to teach your kid how to be a Yiddish dork that throws random words out at their Catholic friends to confuse them.

Or hey if reading isn’t your thing, maybe you’re more into board games. Well in that case, this is the perfect gift for you:

I love Monopoly, don’t get me wrong. There’s nothing really inherently funny about the game itself.

What I think is hilarious is the fact that if you’re playing a Jerusalem-themed Monopoly game, something like the Wailing Wall just HAS to be a location on the board, and I can’t get over the idea of building a hotel on the Wailing Wall and forcing your friends to pay $1,000 just to go pay their respects.

That’s just funny no matter who you are.

But anyway, that’s all I’ve got to say on the matter. Hopefully you enjoyed this little visual tour of the museum with my family.

If you’ve got any fond Jim Henson-based memories, let me know about them in the comments! That sounds just wholesome enough to be fun.

Even if I get that Kermit vine spammed at me. Which I probably deserve.