The original Hero-King, legend of Archanea, first champion of the Falchion.

There are many ways to describe Marth. He’s a vastly popular character, essentially the face of the entire Fire Emblem series.

Hell, Marth being included in Smash Bros. Melee (alongside Roy of course) is a major reason why the Fire Emblem series started to see releases in the United States. Without Marth, none of my love for this series — which has filled countless blog posts — could have existed.

I mained this man during the Smash Bros. Brawl days. He was only replaced in Sm4sh by Lucina, who is his echo fighter with slightly faster movements.

Sacred Stones may be my favorite Fire Emblem game, with Ephraim and Eirika taking high billing as lords in my head. But Marth.

So thank goodness Intelligent Systems finally got their heads out of their asses and made a really good Marth alt. Let’s check him out!

Based on his skills, Marth is clearly meant to be a dragon slayer that grows stronger when supported by his allies.

Danny Sexbang would be proud.

Not only is his weapon effective against the Manakete menace, but no counter or follow-up attacks are possible thanks to that Binding Shield. It essentially gives his weapon the extra utility of being a firesweep sword when fighting dragons.

His Special Attack also has some great utility, between a large and frequent attack buff based on his Speed stat (which presumably should be high based on the +3 his weapon grants and the C Skill) and a buff to himself and his allies.

Honestly the only thing I don’t totally understand about Marth here is his weapon’s main, new effect. The wording seems confusing to me, so from my best guess it seems like all of his stat buffs are doubled during combat. Could be totally wrong about that though, so don’t hold me to it until I actually see the skill in action.

Besides that bit of confusion, however, I like Marth here. It’s certainly a better alternate form than his groom outfit. Even if it’s just another sword infantry unit to clog up the pipes.

Also he is literally carrying THE Fire Emblem into battle. That’s just dope as shit.

I’m not totally sure if he’s worth summoning compared to all of the new Brave units that are still cycling through the game (of which I still only have 2/4). Though I suppose part of that intrigue also depends on what other characters are part of the event!

Honestly, Green and Blue are immediately negligible for me in this Legendary Hero Banner. I have all six of those heroes, and while getting another Valentines Hector would be good to pass Distant Counter off with, otherwise none of the others excite me too much.

The Red and Colorless pools, however, are pretty fire.

I already have Female Grima, but outside of her I’m missing the other five.

Obviously Marth is Marth, I already discussed why I’d like him. Reinhardt is one of the best units in the game as a sword-wielding cavalier. Lene would help me fill my catalog. Spring Kagero is just a great unit who’s hilariously out-of-place in a playboy outfit. Finally, Faye is one of my favorite Echoes units, and I haven’t had her since she dropped near the beginning of the game.

So frankly any of those five are in my wheelhouse, and I’m starting with about 100 orbs to burn (though I don’t want to burn all of it considering my investment into the Brave banner).

Luckily I don’t have to burn a lot of orbs thanks to my free summon.

Yeah Kagero. That spring breeze is what makes you difficult to be concealed.

I loved how hilarious this Kagero was when she first came out, and I’m glad to have her finally since I only got Spring Alfonse when that banner was around.

Plus she’s +Attack, -Health. Which may as well be the perfect stat spread.

Now normally I would count my blessings and move on to bigger and better things… But I let my greed get the best of me a little.

Hoping to get one of the three units I don’t have in the red pool, I kept summoning. Now I’m down to 40 orbs at 9 percent. So I basically can’t stop summoning now even if I wanted to, meaning all the orbs I get from here on out are funneling into getting SOMETHING.

Luckily there are a lot of orbs offered by the battle map.

There’s a few interesting things about the Legendary Hero Battle Map this time around. First, obviously, is the fact that Marth isn’t the only one in the spotlight.

If I’m not mistaken, her Legendary Hero Battle was the first, which means we should presumably see more coming back soon.

Though the completed difficulty levels stay cleared, Intelligent Systems appears to have added a brand new surprise for all of us: 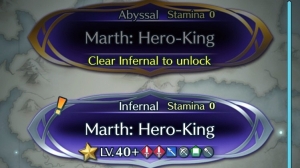 Abyssal difficulty is a new challenge above even Infernal difficulty. Which, to me, is kind of hilarious. Because I cannot even beat Infernal half the time.

Perhaps some YouTuber out there will figure out the solution and I can copy that.

Given that I have not unlocked Abyssal difficulty for Marth (or Robin for that matter), all I have is the Infernal map to show off. 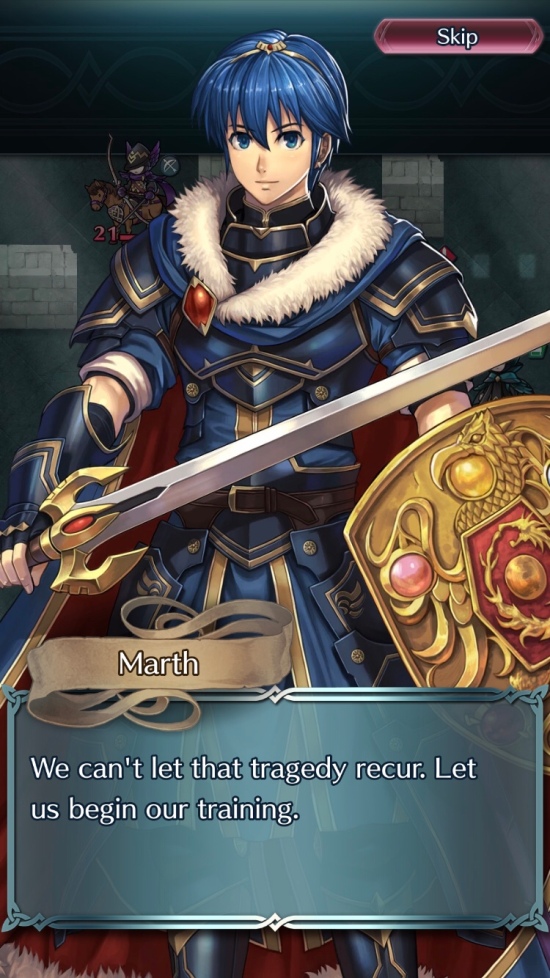 I like that Marth approaches his battle as more of a training exercise than a serious skirmish. Most of the Legendary Heroes take that perspective, and it makes a lot of sense considering their status as main characters and actual heroes of legend.

Except. You know. Grima.

Who is undoubtedly a villain.

I actually find Marth’s fight rather difficult, so I don’t have much to say as far as tips, tricks or cool details go. So I’m just going to cut myself off now before I get to rambling for forever.

So I was originally just going to end this off with the usual bs fanfare.

Then I let myself be consumed by addiction once more and tried summoning on Marth’s banner again.

The gods of gotcha were unusually kind and gave me this boy on my first summon back:

He’s no Marth, but he is my excuse to separate from the banner before I literally bleed myself dry. For that I am grateful.

Even if I now have to restock my orb pile once again.

I thought about changing this whole post to reflect summoning two five stars, but it was all set up before I got this guy so I think it’ll add to the story if I “post-writing” this part.

That said, back to the usual bs fanfare.

What do you think of the Hero-King himself, finally gracing out world of Heroes? Are there any heroes on his Legendary banner you’d like to summon?

Let me know in the comments down below!