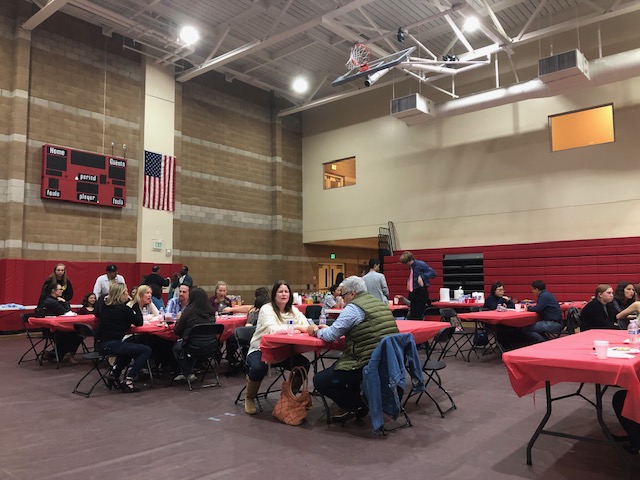 Well I promised two blog posts today, so even if I don’t have a lot to say I might as well follow through.

For the past week or so both my parents have been pretty sick. As a result, thanks to still being on vacation, I’ve become a more distinct guardian for my sister.

Which includes being the chauffeur. Which, by extension, meant getting up to drive her to school for zero period.

Needless to say she owed me a little something. Luckily tonight was her mini-band banquet, a potluck the RUHS Marching band holds halfway through the school year to celebrate the end of the competition season.

If there’s anything high school kids enjoy, it’s gorging on lots of food. 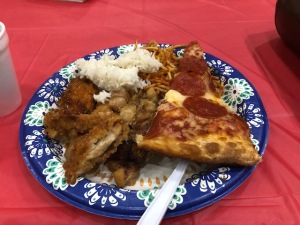 I’m more than happy to mooch.

The unfortunate downside of tagging along to mooch off free food is that the entire event, which hosts about 100 high schoolers and band parents, is held in the small gym on campus.

So imagine a bunch of people stuffed into a hot gymnasium wearing semi-formal attire, walking around on rolled out tarp. 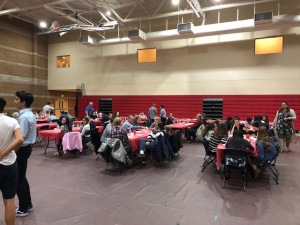 As it turns out, band kids also enjoy breaking the flow of music to do silly things.

And singing a Minecraft-themed parody of a-ha’s “Take On Me” en masse.

While it was admittedly hilarious seeing the older parents who have zero concept of internet memes cringe harder than I did, that didn’t stop me from cringing.

In fact, ridiculous high school antics were rampant throughout the event. The most stand-out of which for me being a girl walking around who apparently did not get the semi-formal memo because she wore a sleeveless crop top, leggings and heels.

I know that sounds like I was being a creep and judging what some high school girl was dressed in, but I swear she just stood out that much.

Outside of cringe-enducing high school antics, I suppose I can’t say I regret going. The food was a huge plus, and I have become at least pseudo-friends with some band parents simply because I’m around so often for Alyson. It’s nice catching up with them.

I even chatted with someone who was willing to give my business card out to someone who works at one of the local newspapers around Redondo Beach.

But of course, it was also nice to support my sister.

Even if it meant getting a picture with this real creepy mannequin from their field show in the background.

I assure you that even for someone who was at some of the shows, this guy here doesn’t make too much sense.

Aly only has one more year of this stuff ahead of her (as much as I die inside every time I imagine her graduating high school so soon), so I might as well fill in as much time supporting her as I can before she probably heads across the country for music school.

… Just as long as she doesn’t do so until we finish Pokémon Let’s Go, Eevee together.

I’m not letting that one go.