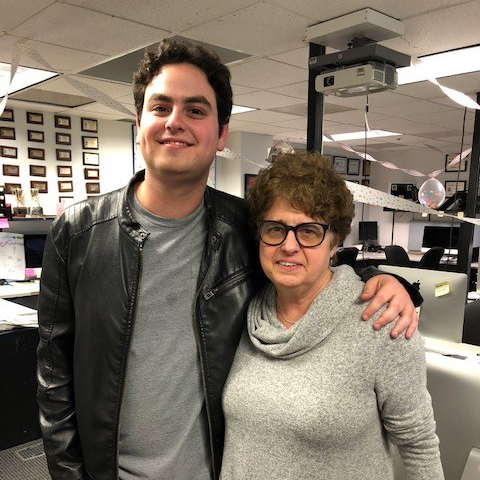 If I have any people to thank for just about all of the great stuff that has happened to me over the last three+ years, Bonnie Stewart has to be a big one.

Today, current and old members of the Daily Titan staff threw our favorite advisor a surprise party before her retirement from CSUF.

It was a sad day not just for all of us in the newsroom who have come to love Bonnie over her last five-and-a-half years advising the school’s newspaper, but also for nature in general apparently. The universe itself seemed to cry at the idea of her moving on from all of us students.

Not sure why pictures of the Pollak Library seem to be my barometer for things happening at Cal State Fullerton, but between this and my empty library picture from before Thanksgiving break I seem to be developing a pattern.

In this case I suppose I can blame it on the torrential downpour, which necessitated me to take a picture from inside the cozy warmth of a Starbucks post-meeting in the Honors Center rather than getting my phone drenched. I’m not kidding, it really came down like cats and dogs.

Pretty sure I hydroplaned at least once on the freeway going in this morning, and it was extra fun having copious amounts of water splash up against my windshield from adjacent cars.

… Alright maybe that’s enough complaining about the rain. This is supposed to be something of a celebratory ‘thank you’ kind of post after all.

Plus the rain had dried up by the time I left at about 6:00 p.m., four hours or so after the party for Bonnie began.

I wasn’t expecting the party to be very long or busy, but I’m glad I was wrong. Not only was it great seeing a packed newsroom show up to celebrate Bonnie, but a lot of those people were friends I haven’t had the chance to catch up with for a while!

Also, it gave my mom an opportunity to do some holiday baking for a crowd outside the usual suspects. By the end of the night there were only three pieces of her coffee cake left, and Bonnie liked it so much that she was happy to take the recipe.

While it was nice catching up with people like Kyle Bender, Amy Wells or Darlene Casas, meeting some older staff members like Samuel Mountjoy, Julia Gutierrez and Michael Huntley, and just generally schmoozing with a bunch of people and food, obviously Bonnie was the lady of the hour.

I’ve actually known about her retirement longer than most (from what I’m aware), as she was one of the first people I had approached to possibly be a mentor for my Honors Project. She had to turn me down since she wouldn’t have been around long enough to see the project through, and since then I’ve had to keep that little secret under lock-and-key.

Feels pretty nice to not have to hold onto it any longer… But it feel even more nice knowing that she trusted me with the secret in the first place.

Three+ years of working with Bonnie has undoubtedly made me a better person and a better journalist/writer/academic/anything, really. Any award I’ve received while at Cal State Fullerton, as well as any internship I’ve gotten as a result of my time at the Daily Titan, can all be tied back to her influence in some respect.

It was bittersweet to imagine her not having that same influence on others going forward as a result. But I know she’s off to do great things even in retirement, and I’m as excited to see where she lands as I’m sure she’s excited to see me (and all her students) land in jobs they deserve.