Between adjusting to new classes, a couple doctor’s visits for things like physicals and working on the Daily Titan, I already feel like I could use a break. It wouldn’t be exaggeration to say that this one week alone has felt like a month in its own right.

At least watching people read the title to my article and pick it up the school paper throughout the day has been a significant little energy boost. 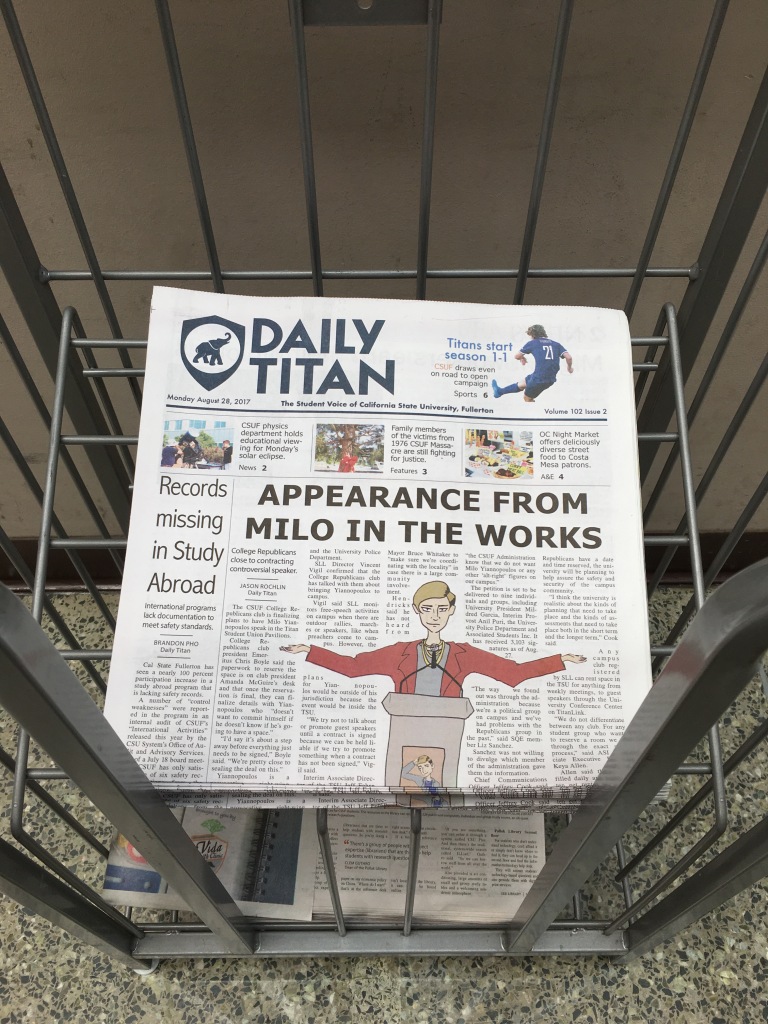 Though the beginning of school has been a major part of my stress and exhaustion lately, certainly working on this big story has been a significant contributing factor, despite it all being worth the effort in the end.

I’ve done at least eight or more interviews within the last week alone to put this piece on controversial conservative speaker Milo Yiannopoulos potentially coming to CSUF and how close the process is to securing it. In the end I’d argue I accumulated enough content to fill up five completely separate articles on different subjects related to this event in the works.

Thanks to my assistant Amy for some help transcribing and to our Editor in Chief Zack for helping me work through putting it all together in a cohesive way, I’d say things turned out pretty wonderfully.

The story essentially begins with my delving into the College Republican club’s plans to bring Milo Yiannopoulos to campus and confirming that they have been doing what they said they have been doing. That meant going to every source that club president emeritus Chris Boyle mentioned to confirm that they had been in touch with the club on the subject.

Once all of those confirmations were in place I was able to delve into what got us started on this investigation, a petition put online by the Students for Quality Education (SQE) organization on campus. While the fact that a member of the Administration supposedly leaked them this information ahead of time despite the College Republicans not making any formal announcements as they finish the process is another story, for now there was not enough information available to really delve into it.

They hope to put the message out to the school’s President Mildred Garcia and a number of others that they don’t want alt-right speakers like Milo on campus, though as I explain throughout the piece it really isn’t up to the Administration to decide that.

That said, the next big chunk of my piece revolves around how campus organizations and clubs, registered through Student Life and Leadership, can get guest speakers on campus to hold events. It’s an interesting process in that it’s almost entirely up to the club themselves to work out any contracts and agreements with both the speakers and the University, so everyone else essentially acts in advisory roles more than anything else.

With all that said, I end off on a note that the College Republicans feel this kind of speaker has been called for by a large amount of conservative-leaning students on campus, and some of their reasoning is interesting to consider. From here on we simply wait and investigate more, as you know we’ll be looking to get our hands on whatever contract is signed between the College Republicans and Milo to confirm what we understand is the day he will be coming.

If that information does end up panning out in the final agreement, it’ll be a pretty big story in itself. So stay tuned.

If you want to check out my article on Milo in its entirety, you can find it here. You can also check out my full catalog of work for the Daily Titan over on the right!

While this is clearly a moment of self-promotion, as I’ve been chatting about my front page article for this weeklong edition, I also wanted to spend a moment talking about how cool the rest of this paper is from all of our elements put together.

Our new layout editor did a great job re-arranging the banner at the top of the paper this semester to make it look way more clean and pretty. The cut-out teaser next to the paper’s name is also a neat touch, in my opinion.

Our new Illustrator has been killing it so far this semester with an abundance of drawings in just our first two issues alone. This one for Milo Yiannopoulos is pretty spot on, and the way we have it so that the podium looks like it continues all the way down the stack of papers creates a nice effect.

I’ve also got to give some props to Brandon for his article in the Front Page 1 slot next to mine, as it’s a really good little investigative piece that easily could have been Front Page Dominant if it had as potentially appealing an eye-drawing visual or name to accompany it. Unfortunately Milo happens to be one of those figures that sells papers, but the hard work he put in is really great either way.

Between all of this and more, like an opinion piece on NASA post-eclipse and a reflection on the CSUF Massacre in 1976, I’d have to say this issue is one of my favorites that I’ve had the chance to work on in my two semesters (plus two weeks) as an editor for the DT. It’s just a really solid paper.

Plus it’s on the shorter side and didn’t keep us here until 2:00 a.m., which is hopefully a trend we can keep up with once our daily production starts next week.

In fact, I’d recommend checking out our entire issue this week, which you can see on our digital Issuu archive. I’d say it’s definitely worth a read.