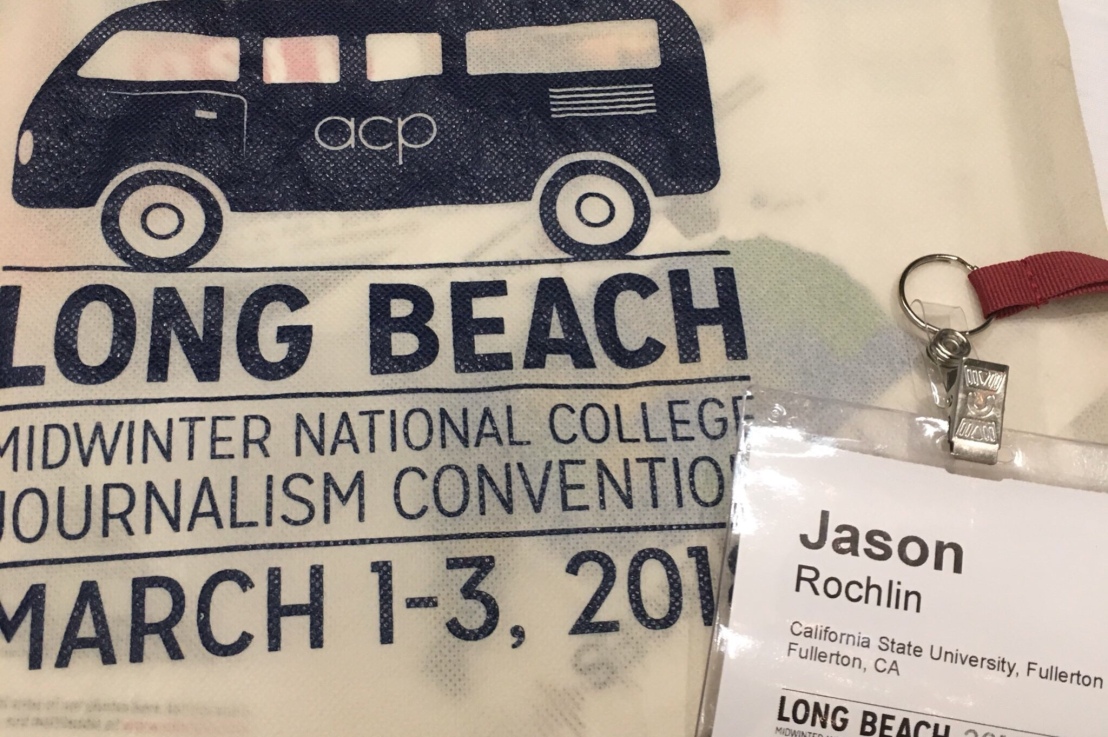 Today has been one of those days.

See,  the 2018 Associated Collegiate Press National Midwinter Convention started today, and as anyone who follows me on social media knows I’ve been trying to more actively post about it than I usually would.

But my day started well before the Convention did, so let me just run that down real fast before I get into the meat of this.

On top of the many things I’ve been juggling lately, one of the most attention grabbing activities has been putting together some College of Communications scholarship applications.

The applications have been sort of a long, involved process that I won’t bother going too deep into. It basically boils down to having some questions to answer, printing out my school records for all four of the scholarships I applied for (talk about a waste of paper there), selecting a couple of my articles for the Daily Titan and getting a letter of recommendation from Bonnie, our advisor.

Today was actually the deadline for applications, and that fact caused me undue amounts of stress when my late night media history class left me unable to drop the materials off yesterday because the office was closed.

For context, what that means is that this morning I had to drive ~45 minutes to Fullerton from Redondo Beach to make sure I could turn everything in before coming to the Conference this afternoon. Long Beach is actually closer to Redondo than Fullerton, so I basically drove a large crescent around Southern California.

But that’s all ancient history at this point. I made it where I needed to go on time in all accounts! I just felt like throwing that all out here because everything was a real headache while I went through it.

So with my complaining out of the way, let’s talk about this Journalism Convention. 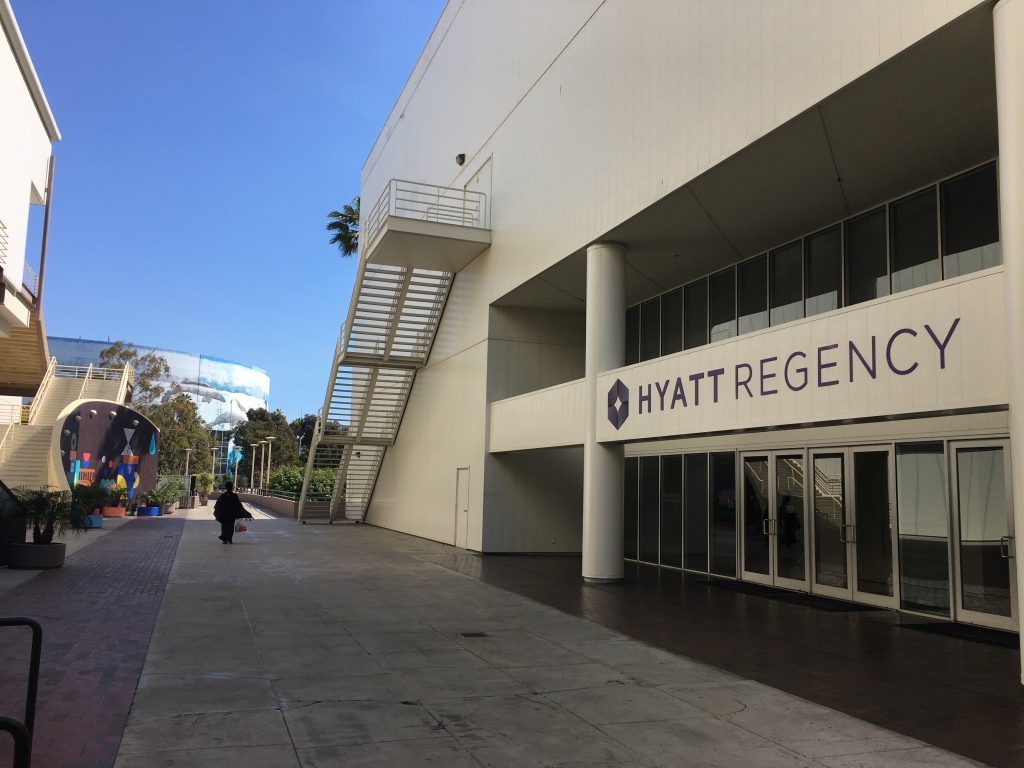 I went to New York a couple of years ago to represent the Daily Titan, and though I did not get the opportunity to go again this year I have had the pleasure of a much shorter trip over to Long Beach for the ACP Convention.

I don’t get over to Long Beach too often, but it is a lovely town. I kind of wish I had a little more time to just wander the city proper, but the sessions I attended kept me rather busy.

Registration came first, and I got all the cool swag that comes along with that: 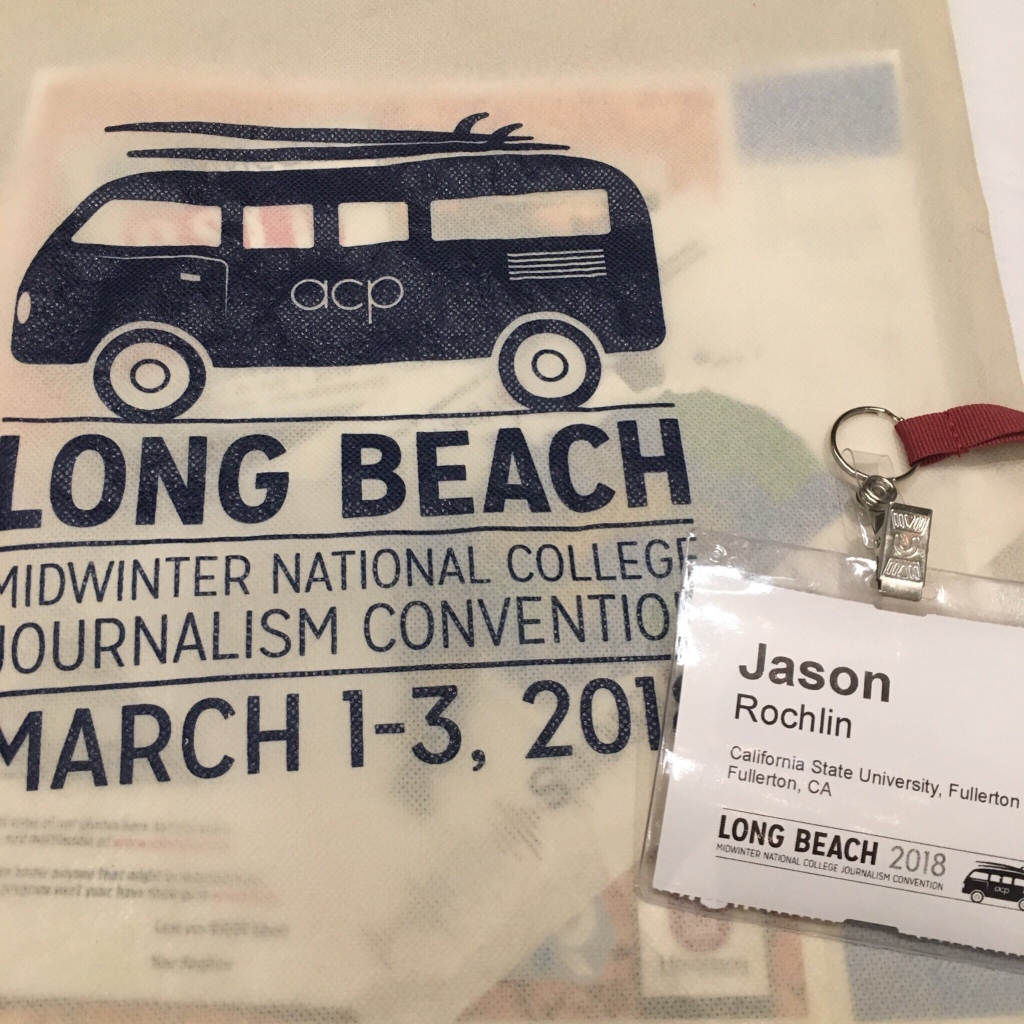 Nothing like another Convention name tag to add to my collection.

Once I was registered, then I got to go through the sessions I picked out.

My first stop of the night was the longest, as it was a 3 hour hands-on introduction to various reporting tools that can be accessed through Google via their News Lab.

To be completely honest about it, I believe I’ve actually seen the talk before. There was something very similar not too long ago at CSUF at least, so I didn’t necessarily learn a lot that I wasn’t already aware of.

But that’s not to say I didn’t learn anything at all.

The presenter, Amara Aguilar from the University of Southern California and the Society of Professional Journalists (and apparently a CSUF alum who still works with the university), introduced a number of tools.

The last one was particularly cool because she also brought along some Google Cardboard VR headsets to try out while pitching the Cardboard Camera App software. Honestly, it’s something I can see myself potentially using.

The only serious downside to this whole presentation was… Well…

The internet was really bad.

As I’m sure you can imagine, it’s hard to give a hands-on presentation of online reporting tools when everyone at the session cannot get online to use them.

Luckily, all things ended on a high note when I won the small raffle at the end and got a Starbucks gift card.

The opening keynote of this convention was particularly interesting to me.

Back when I first started working for the Daily Titan, my very first front page dominant article tied into the shooting in San Bernardino in late 2015. I wrote about how police on campus were stepping up their training following the shooting, and it got linked to the more important revelation that a former CSUF student was one of the shooters.

I still have a copy of that story hanging up on the wall in my room.

So, when I found out that the keynote’s panel was going to be four LA Times reporters who covered the shooting and received a Pulitzer Prize for their work, I was very interested.

I wasn’t the only one. 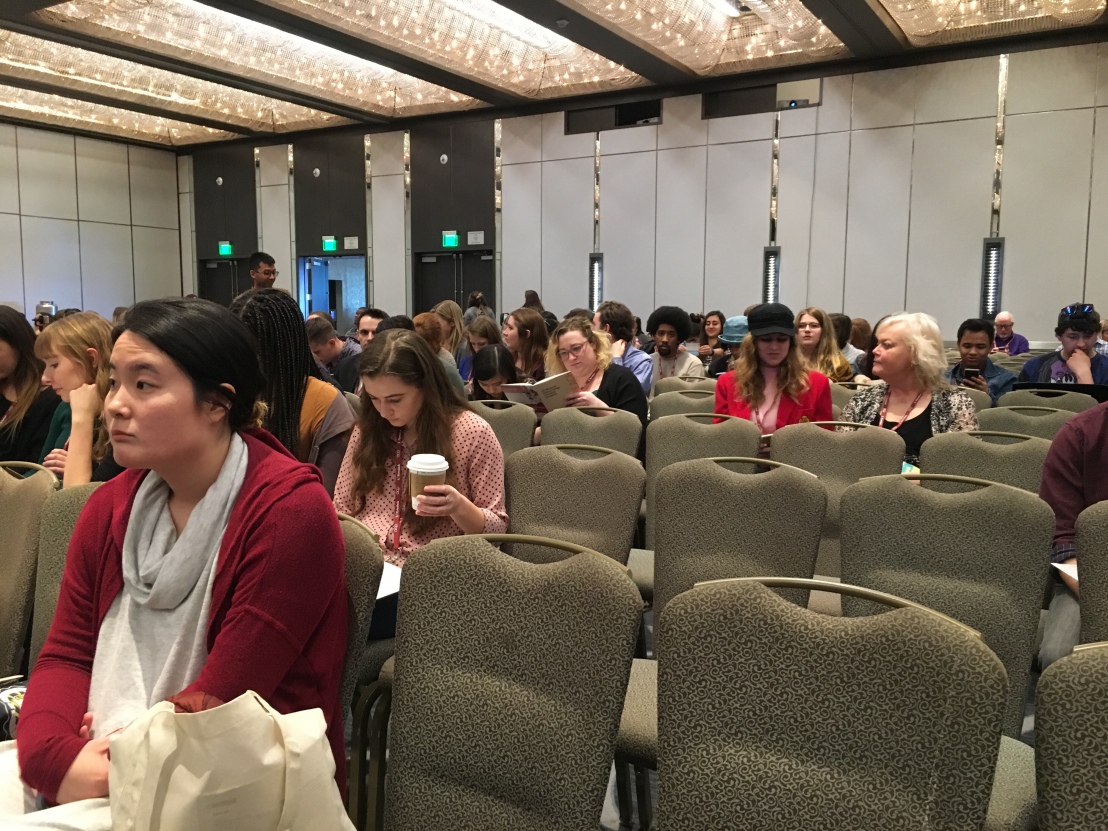 I was also joined by our current Opinion editor Briggetta at this part of the afternoon, which was nice because she was the only other Fullerton representative I saw all day.

But putting that aside, I think the only unfortunate thing about this keynote in its execution was the fact that… To put it bluntly, I didn’t get anything especially novel out of the panel.

Now don’t take that the wrong way, they were a fascinating panel to listen to, and I genuinely enjoyed everything they had to say. Apparently, they updated their day one story 22 separate times and were pointed to by the San Bernardino Sheriff’s Department as the main source of news on the subject.

There was also some good general advice, like keeping food, phone chargers, clothing and road maps in one’s car in case they ever have to go out and cover something. Or keeping things like masks and tools to charge tech through one’s car in case of a natural disaster.

But part of what they wound up emphasizing was the fact that shootings like San Bernardino aren’t exactly a rare thing anymore. As a result of that, advice when it comes to covering horrible tragedies unfortunately isn’t all that hard to come by.

One thing that Sarah Parvini said in particular that stood out on the subject was this: “I hate the fact that this has to be done, but I love getting to be the one that does it.”

My 4:30 p.m. session with Cal State Long Beach professor Danny Paskins was a nice change of pace after the downer that was the San Bernardino panel.

As a Rio de Janeiro native, Dr. Paskins brought his bias (with open admission) to showing us the fact that newspapers in South America are way more creative and fun with their front page designs than North American papers like the New York Times and the Wall Street Journal that focus on fitting as much text as possible up front.

To do so, he showed us examples of papers from Brazil, Colombia, Argentina, Peru and more with various other countries in the region that had qualities he valued.

These are just a few examples of the pieces he showed us that I was able to screen shot.

His pointers boiled down to this. In South America, newspapers use more:

All in typically fun, creative ways.

He pointed out specifically that “if nobody has tried something before, don’t let that be what stops you” because if something doesn’t go over well, there’s always a paper the next day to wipe the slate clean.

The pointers he gave were so nice and interesting actually that I’m planning on bringing a bunch of the specifics back to our Layout and Photo editors as possible things we can try out on the Titan.

I had a nice conversation with the professor after his talk where I expressed exactly that, and he was very happy to hear it. We exchanged business cards and I’m planning on hitting him up if we actually wind up doing some of those things. 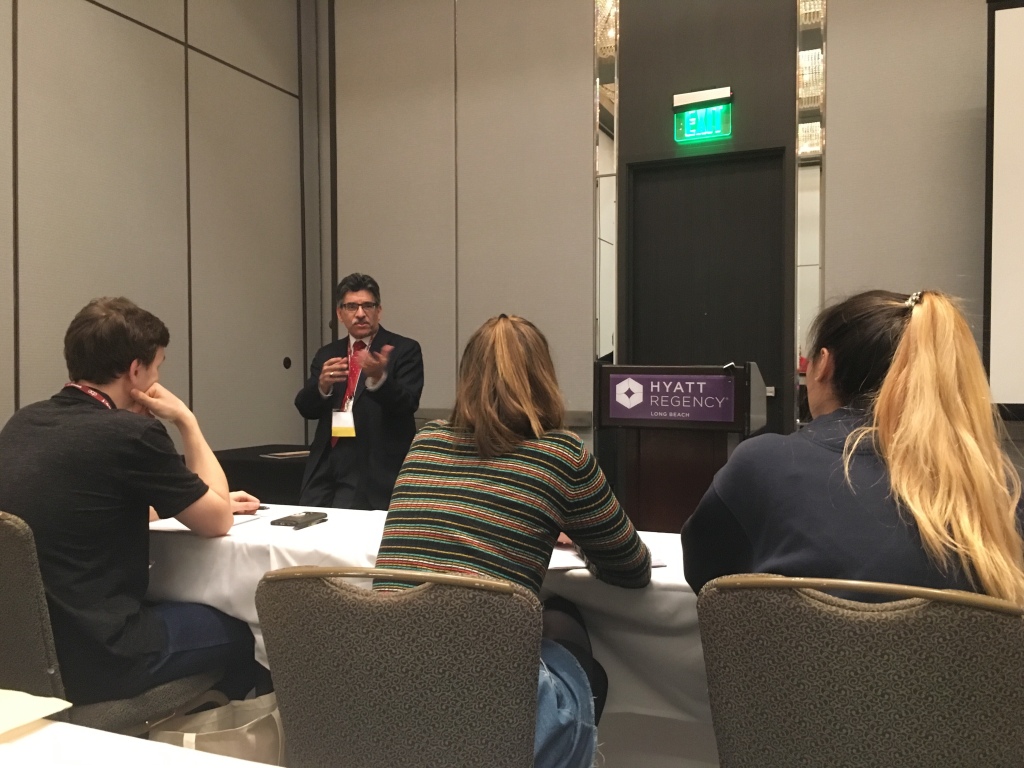 So this session actually didn’t go quite as planned.

It was supposed to be a talk on “Covering the New Activism” by a representative from the Iowa State Daily. But apparently he couldn’t make it out.

Instead, Assistant National Editor Steve Padilla of the LA Times came out and gave us writing tips.

Not to sound inherently rude about it… But I think that turn of events was for the best. The talk we got felt way more fun and interesting than anything we would have gotten otherwise.

He took 30 years of experience at the LA Times and distilled it down into three major writing tips:

Steve also emphasized another philosophy he follows rather closely: “If you know what you want to say, you’ll figure out how to say it.”

In other words, let your meaning create your words, not the other way around.

After that portion of the talk he went on to give us a bunch of tips about how to write better anecdotal ledes, how to use quotes more efficiently and how to end stories well.

Then, to end things off, he gave us three challenges:

This was the one talk I attended where everyone who came stayed afterwards just to talk to the presenter. He was just that fun and charismatic the entire time.

Seriously, I just loved this guy. He was awesome to listen to and I got some one-on-one time with him to just chat afterwards. Totally the kind of networking these conventions are meant for.

As soon as Steve’s talk was over (and it was over about a half hour to an hour later than scheduled because everyone was talking with him), we all emerged to find food waiting.

Though there wasn’t a lot, what was available was much more delicious than it had any right to be for a small college journalism convention reception. Pasta with chicken and spinach, mac and cheese with caramelized onion strands and coconut-fried shrimp.

Plus, there was a truly terrific surprise:

I got to it kind of late, but Homer Simpson would be proud of this donut wall.

Even if I’m awkwardly over on the side taking a picture of it. Hi there Jason.

Fun fact, as a side note, I ran into Steve again at the dessert table and we wound up chatting even more. I just couldn’t get away from the guy, because later it turned out he was parked right behind me in the garage. Not that I’m complaining or anything, I just thought it was funny.

During this reception period, I also took the opportunity to take a look at all of the other school papers laid out.

It’s a bit of a tradition at the Daily Titan for us to collect up other school papers so we can look over what they do right and what they do wrong. In our opinions of course.

Once I gathered everything up, however, it was time to head home.

I ended the night where I began. But more than anything else, the experiences of the day just made me more excited for the next two.

Then on Saturday I’ll be on a panel alongside a couple of other Daily Titan staffers to talk about our Milo Yiannopoulos coverage last semester.

I’ll probably put out a late night update for my next two days of journalism-ing as well, so look forward to that!