BOOM California is a University of California Press publication that aims to examine the Golden State from any and all angles through pieces of writing drafted by some of its brightest minds.

While under the editorial oversight of Dr. Jason Sexton, the publication was housed at California State University, Fullerton. I have served as an Editorial Assistant for the publication since the summer of 2016.

The three issues on display here are print products put out by BOOM before it shifted to an online-only model with individual articles being published rather than full, themed magazines. My name is not attached to each piece I help prepare, be it through fact checking, section editing or seeking photographs, so I won’t attach those here individually.

I am still credited in BOOM’s overall editorial page. 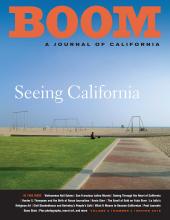 As a part of the BOOM team, I have also had the opportunity to attend and cover different events.

Most notably was the “Take it Back California” event in Anaheim, CA on Sept. 8, 2018 which featured former president Barack Obama advocating on behalf of a number of Democratic candidates for Congress at the time. My blog post describing the experience and a live tweet which I produced that was engaged highly are provided below.

.@BarackObama finally arrives for the #TakeItBack California rally to the cheers of hundreds packed into a ballroom at the Anaheim Convention Center. pic.twitter.com/PxyKS6df4w