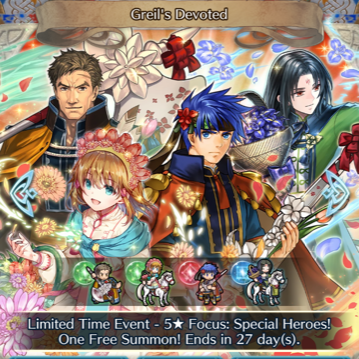 Except for those of us who don’t have a significant other to spoil in that romantic kind of way.

For us, there’s only one way to celebrate this most commercial day of love:

Right off the bat, I think it’s worth noting that I vastly preferred the approach taken by last year’s Valentine’s Day banner.

There we had Roy and Lilina as a romantic pairing, with their fathers cutely handling the potential relationship in different ways.

With this banner, Ike and his sister reunite with their father. As sweet as it is, I can’t speak to the impact of the character relationships having never played the Radiant games.

Plus Valentine’s Day is usually about romantic love more than family love, so the choice to add Greil here seems a bit bizarre. Why not for Father’s Day?

That being said, Greil — namesake of The Greil Mercenaries, is an interesting character pull.

He’s also easily the best unit on this banner, despite being yet another armored axe-wielder. That power-crept Fury and weapon provide +7 to each stat when next to an ally, and if that ally is armored he also gets to move an extra space.

The other three don’t work quite as well with the same weapon gimmick in my opinion, as Mist and Soren are both different flavors of the new Feint/Rally skill combo and Ike is another long-range red armor.

He’s the second best thing on the banner because Black Knight is a broken unit archetype, but that’s almost a given when Ike is involved.

I kind of feel like I should have used my orbs to invest more into the Duma banner, considering I got neither Duma nor Tiki.

But I can’t be mad because Intelligent Systems gave me a very nice Valentine’s Day present:

Both at 3 percent? Sure I might be a little salty that Mist and Greil are in the same color pool, but this kind of luck is unheard of for me.

If there’s anything I can complain about, it’s the genetic likelihood that Ike and his sister each have unique hair colors from their brown-haired father…

It’s almost like the game developers wanted cool hair colors and didn’t focus too much on continuity.

Or the Ike family has some weird recessive genes. I suppose.

The two-year anniversary events have given me the chance to save up a bunch of orbs, so with my luck I’ll save up to see who else comes around next.

Speaking of saving orbs, how about that new Paralogue chapter?

While the aesthetic of the Valentine’s Day maps aren’t my favorite, the actual Paralogue story offers something refreshingly new.

Instead of leading off with the “Order of Heroes goes to get money or food” cliché, this Paralogue doesn’t mention you at all.

It starts with the Greil Mercenaries lamenting Ike’s complaints over his outfit as he slows them down.

Even though it’s kind of what he always wears. 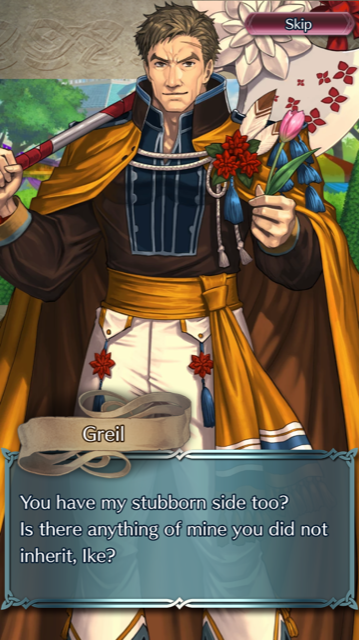 Everyone is shocked to see Greil alive, when he shows up, and It’s really quite nice seeing Ike and Mist so happy to see their father.

Then a few battles pass and we get this scene where Soren is being hella gay for Ike.

So I guess there is romance on this banner?

Everything goes rather smooth until the final battle, which ends with a slightly awkward transition of Greil suggesting that the Order of Heroes surrendered after you defeat them.

I can let it slide, as that moves into another nice scene of the children trying to get their father back. 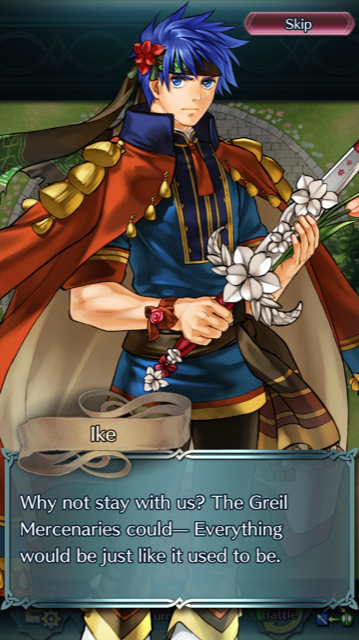 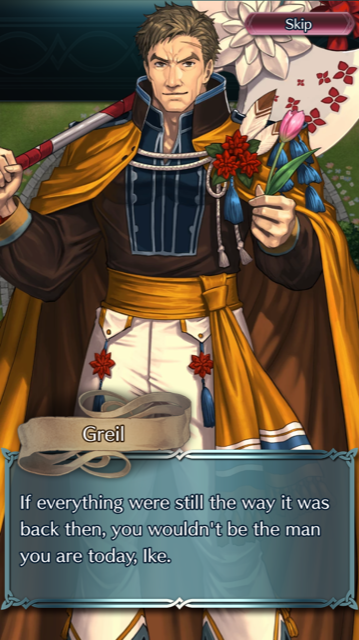 D’aww! It nearly crosses the line into being sickly sweet, but I love the character moment and references to Ike’s maturity over two games.

By trimming the usual fat of Anna being vaguely reprehensible as a leader, Intelligent Systems made for a really nice alternate universe story that I quite enjoyed more than most Paralogues.

… Granted, it did make me wonder why Ike and his family got this special treatment when, for example, we had the Hoshidan mother Mikoto brought back to life in Heroes not too long ago with no fan fare.

But hey. All I continue to look for is a return to some new Sacred Stones characters considering we haven’t seen any since before last Valentine’s Day. I’m a simple man.

There we have it, Valentine’s Day 2019 in Fire Emblem Heroes.

The banner units might just be okay, but that’s made up for by a very nice underlying premise.

Those of you who play the game might be wondering why I didn’t do some kind of joint ‘update banner’ post to talk about the Bane/Boon system, new weapon refines, Aether Raids changes and Dragon flowers.

Well… Mostly because I’m kind of burnt out on the mechanical stuff in Heroes. At the moment I’m playing the game for new characters, even if I appreciate things that have been added.

So I think I’ll skip out on some of the update info for a bit and keep my writing focused on banners, just to keep the game more fun for me.

That said, let me know what you think about these holiday units, and tell me who you want to see in the game next!