Okay so it’s not actually Take your Child to Work Day…  As far as I’m aware… But for my dad it was.

Since I’m off on summer break, he decided to take me along to the office today so I could get a change of scenery and tour the office — something that my sister has been able to do, but I haven’t considering I’m off in Fullerton 99 percent of the time right now.

Obviously I can’t bury the lede too deep considering the big reveal is spoiled in the featured image.

If it even is a spoiler? I’ve probably talked about this before.

My dad is a Senior Director at Fandango, the movie ticket and streaming media site owned by NBC Universal. It’s a pretty perfect place for him in the way it blends movie stuff and technology stuff.

But to be fair, it’s also a pretty awesome place in general.

Just in the last week he got moved into a different office, so I got to be an early observer.

Fun fact, apparently the desks are all mechanized to allow people to adjust them into standing desks if desired. That’s neat, in my opinion.

Not just my dad’s office is cool, though. This place is chock full of movie posters, memorabilia and all sorts of other neat modern spaces.

The more casual parts of the office extend to the outdoors as well.

But of course there were other benefits to coming in on a Tuesday than just a nice couple of spaces to work in.

Fandango apparently does catering for its employees a couple days a week, and someone had enough foresight to bring me in on one of them. On the menu was a pretty good Mediterranean spread: 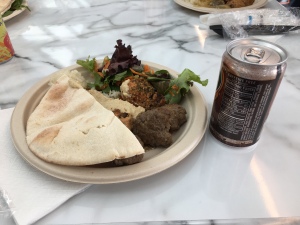 We had lunch with one of dad’s co-workers from the NBC side, which actually was one of the nice things of coming to work with him. Getting to watch him in his element, talking with friends and colleagues.

Even if I felt like I was kind of just off to the side doing my own thing, possibly even in the way during such exchanges, it was still a good time.

Oh, but let’s not forget. The other cool perks of the job.

We were able to watch The Last Jedi on the big, fancy curved TV that was apparently a Korean prototype left over from the previous inhabitant of the office. 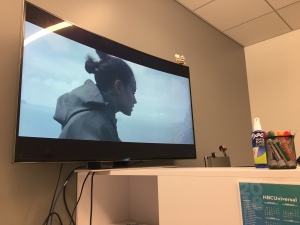 That was pretty sweet. Especially when some of his co-workers came in and sat around for a while to shoot the shit about movie stuff.

While I make it sounds like the whole day was just fun-and-games, there was plenty of downtime for me where I sat around doing some work as dad went off for meetings. Plus, many of the visitors to his office were there for official work business before getting distracted by fun movie stuff.

So if anyone else from Fandango winds up reading this, don’t take it as me saying my dad just did nothing all day. I assure you that isn’t so.

However, it still was a fun day overall. A full day with my dad, going all the way back to our early morning stop at the voting booth for the California primary election today.

Gotta do your civic duty, folks. Especially since this midterm for us means a Gubernatorial and Congressional seats race alongside a whole bunch else.

But hey, this isn’t a political post or anything. So I won’t dwell on that for too long.

It all just plays into the overall message, that I went out, had a fun day with my dad and got to see him in his natural element. Plus I got some work done in the process, so I can’t say I have too many complaints.

4 thoughts on “Take your Child to Work Day”