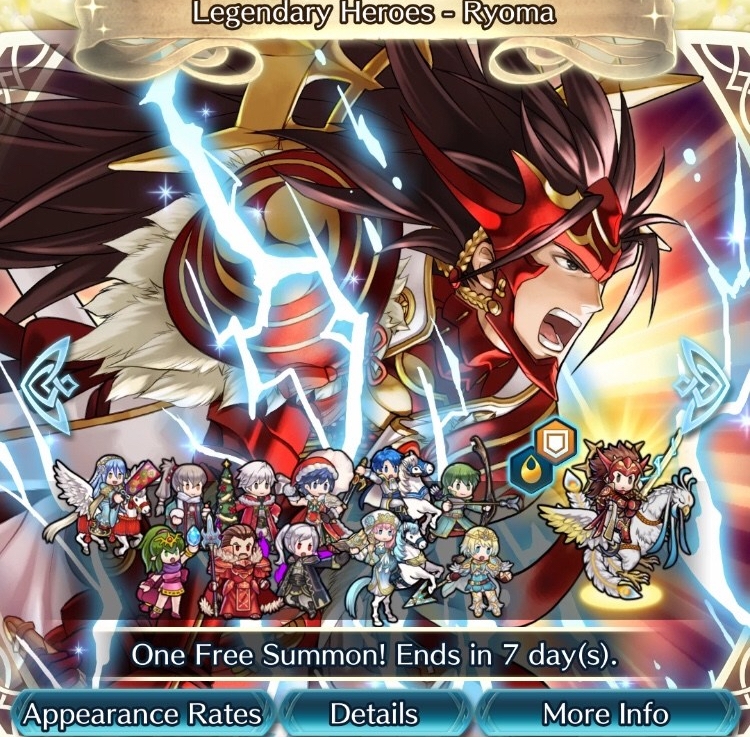 Normally I try to have this kind of Fire Emblem Heroes post out early in the morning, but after exploding all over Pokémon news yesterday I couldn’t bring myself to stay up late to write more.

So enjoy this later-than-average look at the Legendary Lobster himself: Supreme Samurai Ryoma. 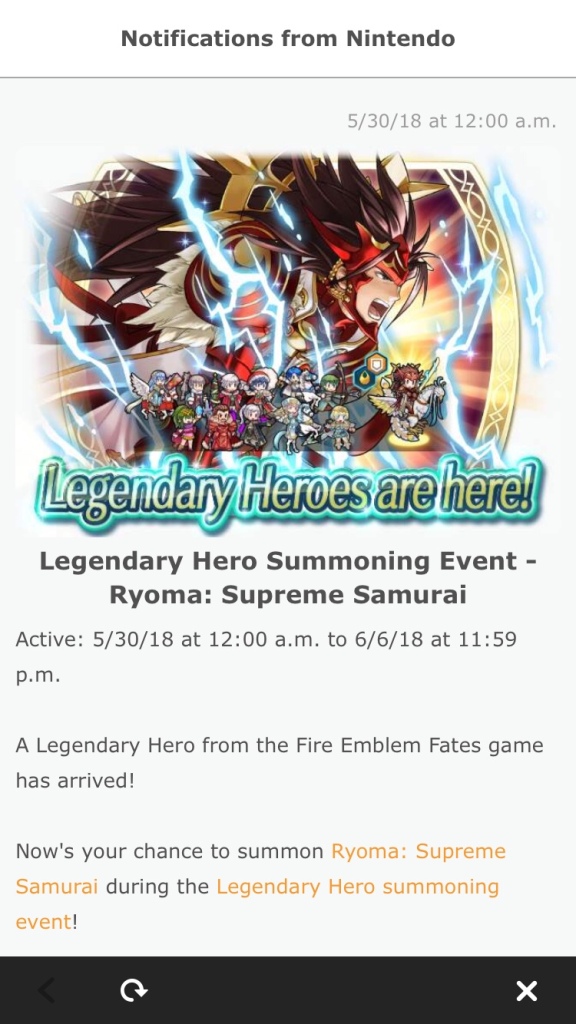 Clearly not wanting to be upstaged by his younger sister, the crown prince of Hoshido is here with his first alternate form since the game was released. Instead of being a grounded samurai warrior, he has taken to the skies on a legendary Kinshi mount to bring swift destruction using his legendary electric blade.

As our seventh Legendary Hero, Ryoma brings all water-blessed allies +3 Health and +4 Defense when they enter battle during a water season. Something particularly interesting about the banner this time around is that it actually laid out exactly how legendary hero stat bonuses work: 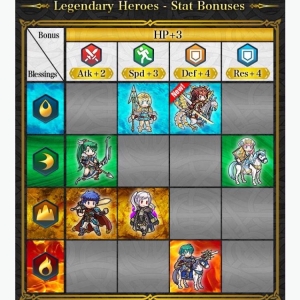 This, by extension, also just about confirms that there are only going to be 16 Legendary Heroes all together. Unless they do something like add more elements of course, but that’s a bridge we can cross when we get to it.

I quite like the chart. It’s succinct and shows pretty neatly how the developers have begun to plan things out.

Next presumably is a fire element Legendary Hero with a Resistance buff, and I’m interested to see who they choose to fit that role.

Many of you who know Fire Emblem fairly well like I do probably thought the same thing:

Why the hell is Ryoma a flying unit?

It’s rather bizarre seeing him take a Kinshi mount, because it seems like the only Legendary alt that’s somewhat out of character. Sure, Kinshi are great mythical beasts associated with the Hoshidan royal family, but Hinoka made far more sense riding one than her brother does here.

If anything, I would imagine Ryoma to fit the archetype of someone like the Black Knight better. A hulking armored unit with samurai gear turned up to 11, stomping around like an impenetrable tank that fires back from all distances with his Raijinto.

Would’ve been pretty dope if I say so myself.

Even though that isn’t what we got, what Legendary Ryoma is certainly isn’t anything to scoff at. Sword-wielding fliers are a rare unit type in Heroes, and even if I have a personal bias for the Elincia that has served me so well, the Hoshidan crown prince is imposing to say the least.

Stat-wise he’s near perfect based on what we can see in his legendary battle. Attack and Speed stats that are both around 50 while still having a baffling high defense stat for a flying unit. Even his resistance isn’t so bad, so he’s well-rounded enough to take a hit and retaliate.

In fact, that’s essentially what his base skills are meant for. If he can tank that bow or that magic attack, not only can Ryoma counter attack from a distance, but his attack and speed are buffed by his A Skill and he deals an insane critical hit thanks to the signature Bushido B Skill.

With it, his distant counter Raijinto also acts like a Wo Dao weapon. It’s kinda nuts.

I’ve seen some buzz talking about how Ryoma may just be the strongest Legendary Hero we’ve ever gotten, and I can’t say I disagree. I had expected a complete glass cannon based on his flying attribute, but those defenses don’t lie.

However, he isn’t the only thing available on this summoning banner. Also in the eight percent pool are:

Being blunt about it, the red stones are the only ones I truly care about in this pool of focus units.

Ryoma is obviously the chief goal, but Sigurd and Tiki are both solid options to summon for me as well. Both units are perpetual projects of merging that I tend to be working on, and both are frequently in use in my army. Plus, Tiki is about to get a new legendary weapon, so she’ll be even more fun to see in action.

Beyond that, I already have both the Legendary Nifl sisters and Legendary Grima — though I do find it interesting that Legendary Lyn is not on this banner given the fact that she’s the last one we saw implemented.

The Christmas and New Years units that are returning aren’t exactly my favorite either. I already have Azura and probably wouldn’t bother with anyone from the Christmas side but Tharja.

Though if they brought Tharja back she would be in three different summoning banners at the same time right now… So I can understand the restraint.

The non-special units, Hardin and Innes, just seem kind of random honestly. They’re both good of course, but not necessarily good enough for me to bother pulling them.

So that means we’re just sniping the red orbs fellas, where are those- 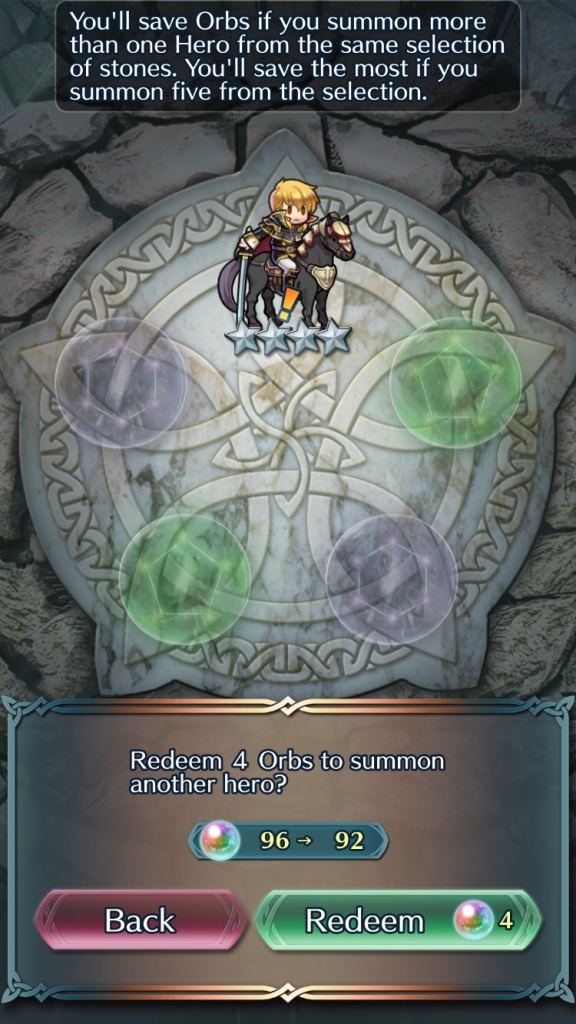 Yeah that has been a bit of a pattern for me on this banner so far, just pulling singular red stones. In the case above, Ares was a cool compensation unit since I didn’t have him before, but beyond that I haven’t had a whole lot of luck.

This time I swear I’m going to keep my orb counter above 50, I won’t break that promise. There are still brides waiting in the wings for me somewhere, I hope.

That said, orbs are available through Ryoma’s legendary battle. 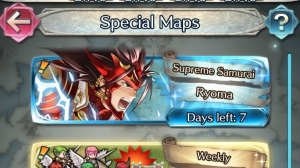 Except if you’re going to try that, you should know it’s a little… 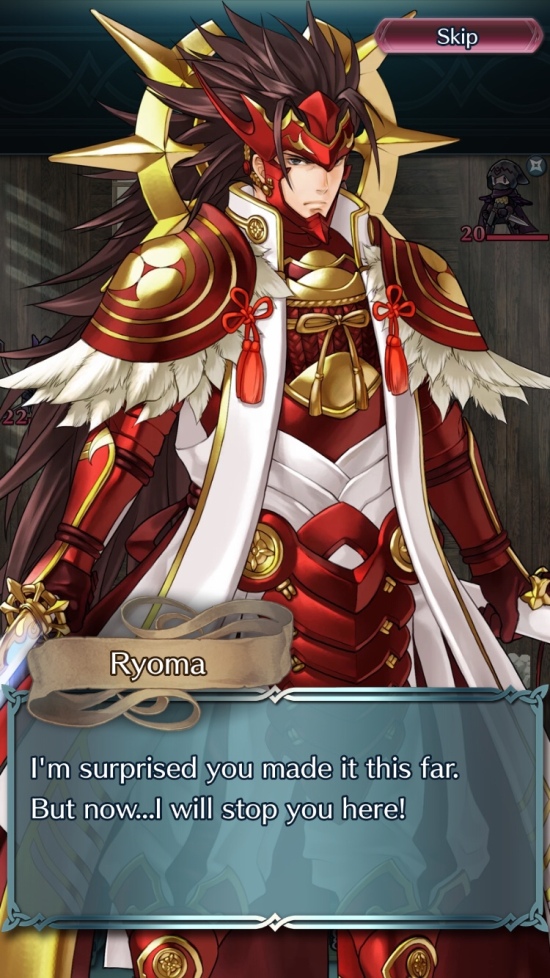 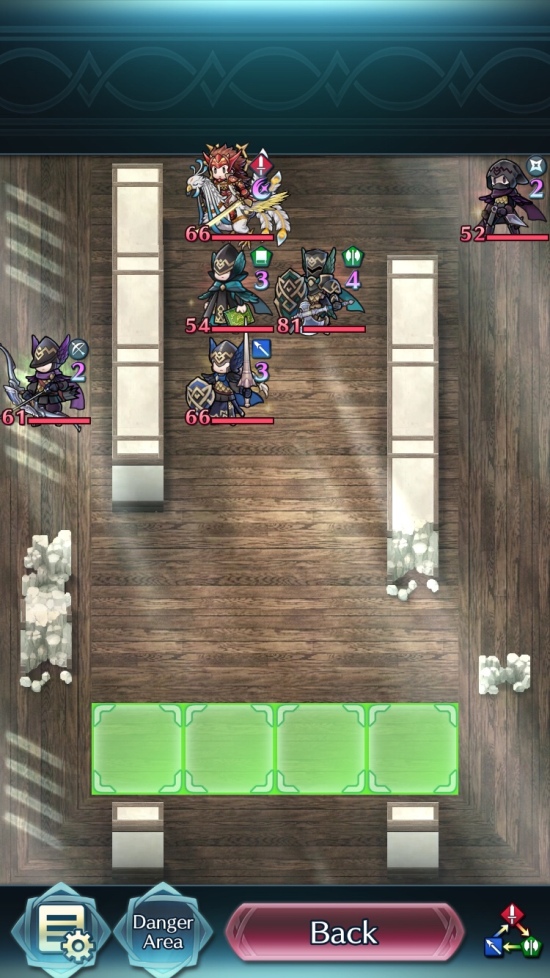 The dude basically surrounds himself with long-ranged units so he can wear you down before coming in for the kill. I’ll admit that the map does a great job showcasing why Ryoma is so powerful, but boy that Infernal difficulty hurts when you need to get through so many waves of reinforcements.

Oh well. Even with the Tempest Trial cleaned out for me, hopefully I’ll be able to stock up on some more orbs somewhere or another.

Beyond that I don’t have too much more to say about this Legendary Lobster. What do you think about him? Is he too overpowered? Or just overpowered enough?

Let me know in the comments below, and while you’re at it let me know who you think the next Legendary Hero is going to be! I’m down to start taking bets.

5 thoughts on “Lauding the Legendary Lobster”