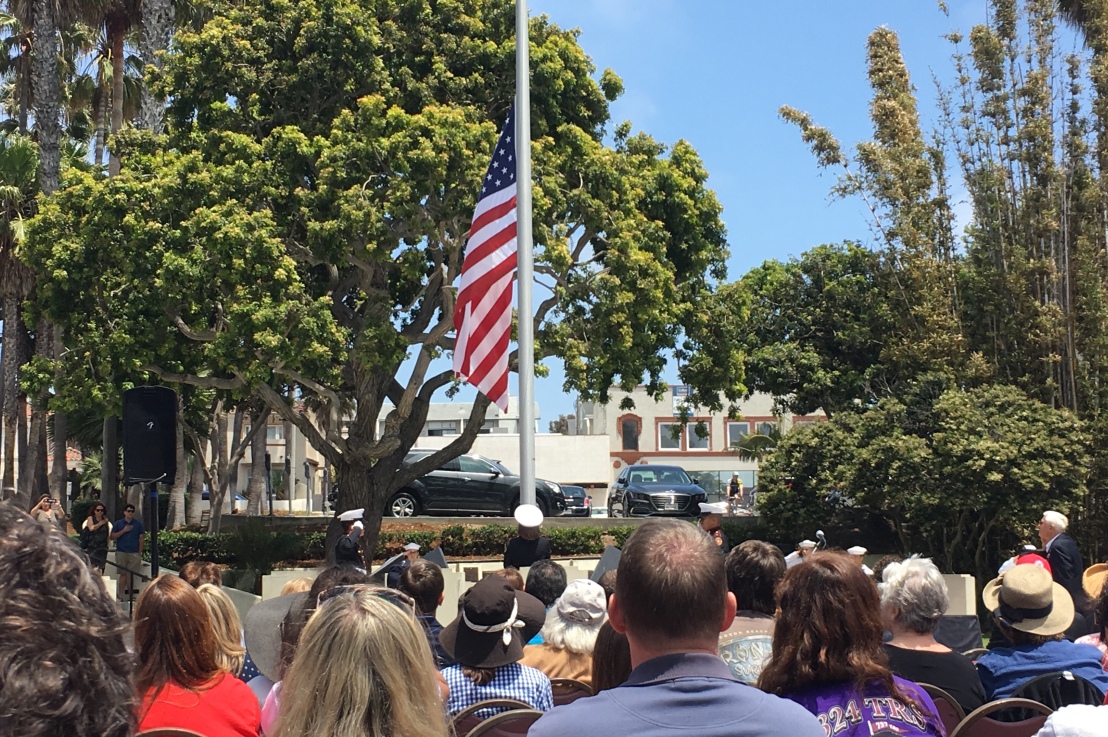 I don’t believe I’ve ever felt the need to describe myself as having been “emotionally patriotic” before, but that’s frankly the best way I can bring to words part of how I felt during the Memorial Day ceremony I attended today.

The City of Redondo Beach put on the event at Veterans Park this afternoon, which for context is a nice sized park with a memorial statue right next to the Redondo Pier.

It was all-and-all a lovely event with a rather nice turnout, including political figures like State Assemblyman Al Muratsuchi and Congressional representative Ted Lieu, as well as both veterans and currently serving members of the country’s five military branches.

Part of the reason I came out to the event, besides showing my respect for our country’s fallen, was because my alma mater’s band was performing — including my sister.

They did a great job not just during stand-alone performances like the one above, but punctuating the entire event with pieces of ambiance. For example, the band’s Trumpet Trio took the place of a bugle to play out recognizable military salutes and calls.

However, the National Anthem was what really got to me in an unexpectedly intense way.

Part of that was because it was a very sweet, slow and drawn out rendition being performed, and the high school kids really nailed the emotional delivery.

But it wasn’t just on them.

When the song started, it was just the band playing against the nearby crashing of the waves and seagull cries. Then, a couple members of the audience began to sing under their breaths, barely loud enough to be heard. It was mostly older folks who I would later see stand during the performance I linked above.

Those few singing members of the audience eventually blossomed into a fervent performance from just about everyone in attendance. It slowly built up throughout the song and left everything to wrap with a unified call for the “home of the brave.”

Like I said right at the top of this, I don’t often get very outwardly emotional with heavily patriotic things related to, say, military service. That isn’t to say I’m not emotional of course, it’s just typically a more silent, introverted and somber emotion.

But I actually cried a little at that moment during the ceremony where the audience unexpectedly joined in on the National Anthem.

Because of that and other parts of the event, like the keynote speech by U.S. Coast Guard Captain Jose Penã and the presentation in honor of Vincent Barbee, a local  RUHS student that died not too long ago, I found myself walking out feeling much more deeply moved than I had expected to.

Though the Master of Ceremonies punctuated the beginning and end of the event with jokes about Stormy Daniels and a George Washington impersonator in the audience, so there was also a good amount of chill Southern Californianism to break up the emotional introspection.

As a quick aside, the video I posted in this piece is actually something I took on my iPhone at the ceremony.

Decided to try something new with this blog post since I wanted to upload my sister’s performance directly here, but haven’t exactly been able to in the past because uploading video directly to WordPress is awkward with how much space it takes up. So I tried posting the thing to my unused YouTube account, that way I could link to it.

Hopefully it works as an experiment, because if so that’ll open up the possibility of my doing more video-oriented content in the future.