When I turned 21 about a month ago, one of the presents my parents got me were tickets to see the live show for one of my favorite podcasts: Hollywood Babble-On with Ralph Garman and Kevin Smith.

Unfortunately the show sells out rather fast well in advance. So we weren’t able to get tickets closer to my actual birthday.

But hey, the timing doesn’t matter all that much. I still got to go after all! Had a blast too while I was at it.

My dad and I have been listening to Hollywood Babble-On together for a long time now. Back in my high school days, probably starting as far back as my freshman year, it would be one of the staple podcasts in our wheelhouse of things to listen to on the way to school in the morning.

Now, for a little bit of context assuming most of you won’t know about it, Babble-On is a dirty, downright raunchy show. All the portions that don’t have Ralph yelling about this or that celebrity doing something dumb and awful usually involves some level of sexual or morbid humor. It’s generally objectively terrible stuff… But terrible stuff delivered in just the most hilarious way you can imagine.

If you’re an awful person who loves the entertainment business like me, you’ll probably enjoy it.

That said, getting to experience the show live with the guy who got me into it was a whole new kind of experience.

We started in the main bar area at about 8:30 p.m. or so and had dinner, which guaranteed us a reserved spot at the show. I had pizza and he had a burger, which were both pretty damn good I’d say. Dinner also included a couple of hours just sitting around and talking about life, since the show didn’t start until 10:30 p.m.

We got relatively lucky at tonight’s show, as it was the first Babble-On performed since Kevin has been out of the hospital from his recent heart attack.

… Okay, us getting lucky about getting to see a show because someone else survived a heart attack SEEMS like a statement centering the focus somewhere it shouldn’t belong… But hey, you’re on my blog. If you want a more personal perspective about Kevin’s well-being, just follow his stuff.

After the first show this evening, I had a massive heart attack. The Doctor who saved my life told me I had 100% blockage of my LAD artery (aka “the Widow-Maker”). If I hadn’t canceled show 2 to go to the hospital, I would’ve died tonight. But for now, I’m still above ground! pic.twitter.com/M5gSnW9E5h

If tonight is any indication, he’s doing way better.

That said, if nothing else the aftermath of that experience made for a fun first 20 minutes or so.

Did I mention that the show was nearly three hours long last night? Because it was, and we didn’t leave the Improv until 1:15 a.m. or so this morning. Don’t get me wrong, we had a blast, but it’s going to be arduous to listen through the show again to see if we show up in the general background audience noise.

The shout out we sent in emails for was unfortunately not read during the show. But we were so close to the stage that I wouldn’t be surprised if I hear my obnoxiously loud laugh or a cough somewhere along the way, despite the fact that there were probably close to 200 people packed into that comedy club.

Because of the length of the show, I don’t think it would be healthy for me to lose much more sleep just to break the whole thing down. Long story short, it was super fun, I might link to the audio once this episode goes up and I probably won’t ever listen to Babble-On the same way ever again.

It’s an interesting phenomenon to think about, the fact that you can be imagining something auditory one way for years only to have that whole perception change when you finally see it in person.

But obviously that’s a tale for another time if I do.

I think it’s also worth mentioning that tonight served as another milestone for my being 21: I drank for the first time!

Yes, yes, that ever-present right of passage that literally nobody would ever let me hear the end of when I was making my way through the earlier parts of college and refused to drink. I figured if there were ever a good time to try alcohol, it would be at a raunchy comedy show at the famous Hollywood Improv. 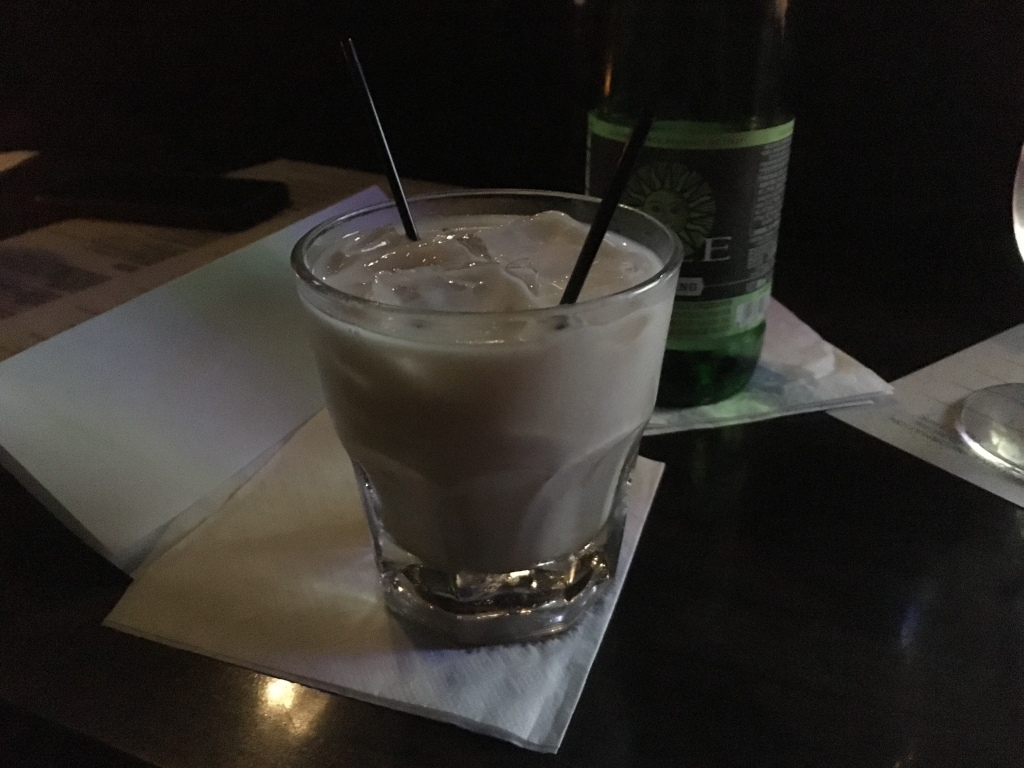 Given the fact that I have no idea how alcohol works, I let my dad pick out my poison. A White Russian he decided, as he figured it would taste enough like a milkshake to circumvent the bitter alcoholic content.

Unfortunately, that was but a pipe dream.

I’ll be honest, I barely got through half of the small drink I had. While my mom later argued it would have been better to go with something like a rum and coke, I just still don’t know if that would have been my thing.

Maybe I just don’t really understand the appeal. All I got out of the drink was a harsh, bitter taste that burned on the way down. Bitter without any flavor to disguise it.

I don’t know, I suppose I can try again later, but for now my first experience with alcohol was a failed one. Even if the venue surrounding the drink was unforgettable.

Hot take: Alcohol? Could do without.@ThatKevinSmith? Couldn't do without.

Had an awesome time at the show tonight Kev and @RalphGarman!

Though it is probably worth mentioning that as I suffered through one drink like a loser, Ralph managed to down three shots and four glasses of Guinness in honor of St. Patrick’s Day.

So that’s one for the book of masculinity I’m sure someone is keeping.

5 thoughts on “One Night at the Improv”