Once again my busy schedule has kept me from being super timely with the new CoroCoro magazine leak that happened on Monday, but that isn’t going to stop me from unnecessarily rambling on about things that make me happy and provide a good distraction from a stressful and hectic period in my life.

On that happy note, let’s talk about some Pokémon, shall we?

The major part of the leaks we got recently involved one of my personal favorite Alolan Pokémon so far: Rockruff.  We’ve been teased about it having some sort of strange special power for some time now, and it seems like the beans are finally beginning to spill.

Rockruff has an evolution, Lugarugan, that has two divergent forms depending on a factor that I’m not totally sure we have the full scoop on yet.  While the information leak Monday suggested Lugarugan’s Midday Form would be obtainable during the day and its Midnight Form would be obtainable at night, today’s leak suggested it might be a version-exclusive difference instead.

Personally, I happen to think the Midday Form is far superior in just about every way, so I’m hoping that the difference will just be due to time of day and not game version.  I’ll be playing Pokémon Moon after all, and I was already planning on using a Rockruff, so if I’m stuck with the Midnight Form I might be a little upset.  Seriously, it looks like Game Freak tried honestly too hard to try and emulate the kind of evil air Zoroark carried with the Midnight Form, and it comes across as extremely ridiculous compared to the majestic Midday wolf.

Arguably the best way to explain this difference in my head is to evoke the analogy of William Shatner’s portrayal of Captain Kirk in the Star Trek series.  There was an episode called “The Enemy Within” in which Shatner had to portray an evil version of his iconic character, and he did so with… Ridiculously hilarious results.  Here’s a sample from the episode.

That is how I feel about Midnight Form Lugarugan.  It’s THAT level of over-the-top ridiculousness.

Past the form difference, we don’t really know all that much about Lugarugan so far.  It’s typing, abilities, classification and english name are all still unknown.  The only other thing we know through the pictures that have leaked is that Midday Form will have a new priority move called AccelRock while Midnight Form will have the move Counter.

The second major part of the CoroCoro leak on Monday included a new Ultra Beast: UB-02.  Unlike UB-01, this Ultra Beast has two different forms that will appear depending on whether you play Pokémon Sun or Pokémon Moon. 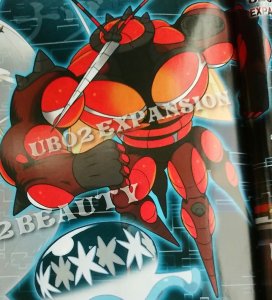 Like with UB-01, we don’t know all that much about this Ultra Beast besides the fact that they will be engaging Tapu Koko for some unknown reason.  However, this hasn’t stopped me from mentally contributing this new beast into my overarching Sun and Moon theory.

In that post, I compared the similarity between Lillie and UB-01, since they do basically look like the exact same character in a sense: 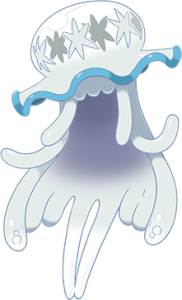 Pretty striking, right?  Even though I don’t follow the same line of beliefs that many people have suggested, that Lillie and UB-01 are one in the same, I do recognize the very clear resemblance. 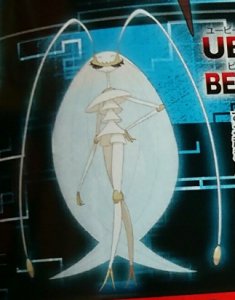 Clearly, there’s meant to be some sort of obvious connection between UB-02 and Lusamine.  They have their legs crossed the same way, both are wearing heels, both fit a pretty slender body type and both have very long hair – though it’s more of an ethereal light manifestation on UB-02 from the looks of it.

While I still don’t necessarily know what this means, as people could very well be correct in suggesting the Ultra Beasts shape shift into prominent human characters, I do know that this seems to back up my connection between the Aether Foundation and the current existence of the Ultra Beasts in some way.  After all, why would two of them look exactly like two characters that (I believe are both) associated with the Foundation if they weren’t pulling something from them directly?

That’s just about all we got in this leak though, folks.  As far as the Ultra Beasts go, it’s interesting stuff for sure, and I can’t imagine Sun and Moon won’t be packed with interesting story and drama for us to expose while playing.

Now if you’ll excuse me, I’m going to go see if I can figure out how to get the buddy system in Pokémon GO working.