Because I spent a lot of the day hanging out with my friend Samantha yesterday, I didn’t really have the chance to write up anything on the new Pokémon trailer we got yesterday.  While there isn’t a huge amount to say considering we’ve seen three-quarters of the new monsters through an earlier CoroCoro leak, there is one totally new Pokémon and some interesting things to update about the ones we’ve seen, so I figure it’s still worth talking about this trailer.  For my records here, if nothing else.

Let’s start with the older guys, since it’ll be easier to get them out of the way first.

Once again, we get to say hi to Stufful, Bewear’s pre-evolution.  We used to know it by it’s Japanese name Nuikoguma.  It’s a Normal/Fighting-type like it’s evolution, and they have the same abilities Fluffy or Klutz.

According to it’s official description off the Pokémon website: “Stufful’s cute appearance and movements—plus the fluffy feel of its fur—all combine to make it super popular! This Pokémon may have a small body, but its strength is extraordinary. Receiving one of its powerful hits without being prepared for it can bring down even well-trained Pokémon!  The truth is that Stufful doesn’t really like being touched.  It hates being hugged tightly and will flail its arms in protest.”

That’s about all we have for Stufful honestly.  In my other post (that I linked to before) I did bring up how funny the disconnect is between Stufful’s hatred and Bewear’s love of being touched, and even with this new more fleshed out description we don’t have much more to reflect on past that from what I can tell.  Again, it’s cuter than the evolution and the idea that it might flail and hurt its trainer with the strength to take down well-trained Pokémon just for showing affection is pretty funny, but that’s about all I can think to say.

Oh also, it has a tag on it’s butt like a stuffed bear would.  Which is… Pretty weird, honestly.  Solid design past that, though. 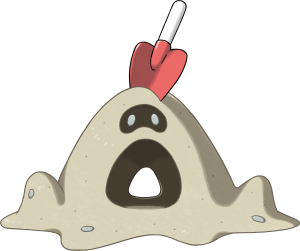 Like we only knew the Japanese name for Stufful in the original CoroCoro leak, before this trailer we only knew these Ghost/Ground-types as Sunabaa and Shirodesuna.  I really liked these two when we first heard about them, and not much has changed since then.  They’re really well designed in my opinion, and the lore that comes more fleshed out with their official descriptions only helps with that.

According to their official descriptions off the Pokémon website:

Sandygast: “A Sandygast emerges when the grudges of Pokémon and other creatures soak into the sand after they fall in battle. In essence, it’s a possessed lump of sand! If you heedlessly grab a Sandygast’s shovel, you’ll fall under the Pokémon’s control. A Sandygast uses its power to manipulate children into gathering sand to increase the size of its body. If a Sandygast loses its shovel, it may put up a tree branch, a flag, or another item in its place. These Sandygast are wanderers in search of their own shovels. The tunnel-like mouth of a Sandygast can suck the vitality from people and Pokémon. Apparently it’s a test of courage in the Alola region to put your hand in a Sandygast’s mouth.”

Palossand: “Palossand controls human adults, making them build a sand castle that provides camouflage and also raises its defensive abilities. Unlike Sandygast, if Palossand loses some of the sand from its body, it can restore itself on its own. When moving about in search of prey, the shovel on top of Palossand’s head revolves. It’s said that the shovel could be serving as some kind of radar. Palossand loves the vitality of Pokémon and drags small Pokémon into its body so it can steal their life force. Its sandy vortex swallows them up in a heartbeat! Pokémon dragged into Palossand leave traces of their ill will behind. It’s thought that this negative energy may be the starting point of new Sandygast…”

There’s also an image of a Palossand absorbing a very distraught Pikachu on the official page, and it kind of makes the Pokémon’s description that much more terrifying – even if the rotating shovel radar is pretty adorable.

The other thing we can take away from the trailer about these sand-based ghosts is their brand new ability: Water Compaction.  Essentially, when Sandygast or Palossand are hit by water type attacks, they get a +2 defense stat boost.  While this ability sounds cool in theory considering Ground-type Pokémon are weak to water, from what I can tell there’s a serious problem with it.  When the Shellder uses Razor Shell on Sandygast in the video, it appears as though Sandygast takes the super effective attack’s full damage before the boost is activated.  That means it wouldn’t work like Water Absorb to neutralize the damage, and thus you would have to take a serious hit before getting the benefits of the ability.  Plus, only defense is raised, so any special Water-type attack wouldn’t be hindered in anyway unless these two already have really impressive special defense stats.

So, cool idea in theory, but overall seems to be useless in execution, unless you could work out a way to apply the buff in a controlled way to yourself through a double battle.

At the same time, I feel like realistic sand castles would actually get weaker when hit by water at first, since they would get more muddy and soft right away before eventually hardening… But let’s be honest, Pokémon isn’t necessarily the place to bring realism, so I digress.

Now it’s time to talk about someone new.  Crabrawler is a Fighting-type Pokémon that can have the abilities Hyper Cutter or Iron Fist.  It’s also possibly one of my absolute favorite new Pokémon that’s been announced for Sun and Moon so far, because it’s just incredible from appearance and description along.

According to Crabrawler’s official description off the Pokémon website: “Crabrawler has a personality that really hates to lose, and it’s driven not only to aim for a higher position than its fellows in terms of social standing, but literally to aim for a higher position in the landscape. Perhaps as a result, it’s sometimes found clinging to tall people or to the walls of buildings! If you try to remove one against its will, you’ll be met with a sound punch. Crabrawler’s favorite food is Berries. It punches the trunks of trees to give the branches a good shake and knock any ripe Berries to the ground so it can feast! Many Crabrawler may gather around a tree, but only the one that emerges victorious in battle against all the others receives the privilege of eating the ripe Berries. Crabrawler uses its claws to protect its face and belly while getting in close to an opponent to throw punches. Its punches are powerful enough to split tree trunks! Crabrawler’s pincers are sometimes torn off during its bouts—and they are said to be delicious.”

Seriously, everything about this guy is amazing.  The fact that his claws look like boxing gloves is awesome, the hairpiece and black eye-like blue eyelid really completes the image, and just picturing a 2″ tall crab latching onto the head of it’s trainer as they walk around to try and be taller than everything else is just the best.

While I haven’t planned out my entire first play through team just yet considering we don’t know every Pokémon that’s going to appear in Alola, I think it’s safe to say Crabrawler is very high up on the list of guys I want to use.  A cool, useful Fighting-type is a good thing to have, and I get the feeling Crabrawler will be really useful if they don’t screw up it’s stats or move pool.  With an ability like Iron Fist available, I doubt they’ll not give it some good coverage.  Bullet punch, the elemental punch attacks, STAB close combat… I’ll be looking forward to seeing what comes with him.

Well that’s all for now folks.  All and all the Pokémon we got in this trailer are pretty great, even if I’m not personally a huge fan of the Stufful line as a whole.  If it weren’t for Mimikyu being the best Ghost-type, Palossand would be a good candidate for being a part of my team, and Crabrawler is well on the way to holding a position.

What do you guys think of the new Pokémon?  I know it’s a bit late and I’ve probably missed out on the blunt of the conversation regarding them, but I’d still love to know!  With the 2016 Pokémon World Championships going on now, I’d expect we’ll be getting some more new information pretty soon – perhaps during the closing ceremony, so that’s hopefully something to look out for!

One thought on “(Not so) New Sun and Moon Information: Stuffuls and Sand Castles”