While I was in New York for a week, wandering the landmarks and participating in sessions for the College Media Association conference, there were quite a few things I missed in the news that I had to catch up on when I got home.  One of those things, was the death of Eric Medalle.

There were many reasons I felt like I should talk about this particularly sad passing.  For one, I am a college journalist – reporting the news is one of my drives in life.  However, more importantly than that, Medalle’s loss is a tragic one both for the circumstances of his passing and for the inspirational work he’s left behind, as well as it’s meaning for myself and undoubtedly many other people.

While driving through Seattle, Washington on Sunday, March 13, 2016 with his two-year-old daughter Nico, Medalle’s car was struck by a tree which fell during an intense windstorm.  His daughter was pulled from the wreckage by a passerby and brought to a nearby hospital, but Medalle, 42, was killed in the incident.

I’m not the first person to report on this news, obviously enough, so instead of making this post like a news article, I figured I would talk a little about the wider impact.  Pokémon is easily my favorite game series, and Medalle was pretty heavily with The Pokémon Company as an artist and graphic designer since 2003.  He designed artwork for the Trading Figurine Game, logos and cards for the Trading Card Game, and various pieces of artwork for games from the Fourth, Fifth and Sixth generations: Both main series titles and spin-off games like Pokémon Conquest and the Ranger series. I personally have played nearly every game he’s credited in helping create, which makes him a sizable part of my gaming history.

Whether Medalle had any part in working on the upcoming titles Sun and Moon before his passing is currently unknown, but I wouldn’t be surprised if he did.  There is a YouCaring fundraiser running to raise money for his children to attend college, organized by friends of the family.

Thank you for all that you’ve done to help create the experiences that have shaped my life as well as the lives of many, many others around the world. 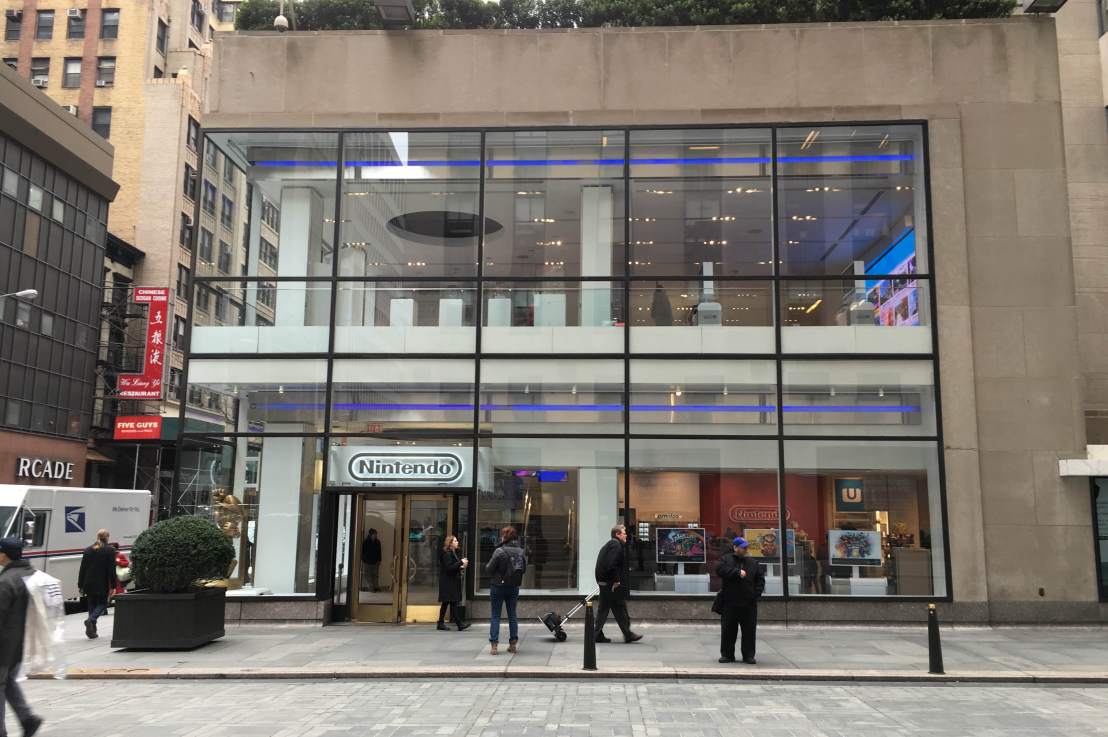 Over the last week, I’ve had the pleasure of being in New York for the 2016 College Media Association Conference.  My fellow Daily Titan coworkers and I got to explore the city when we weren’t in sessions and listening to Keynote speakers, and of course while I was there I couldn’t miss out on the opportunity to visit this little gamer’s paradise in Rockefeller Center.  Since I suppose this is somewhat of a gaming blog I’m building here, I figure it would be a nice thing to talk about on here, even if it’s more of a reactionary thing rather than some sort of opinion on an upcoming game. 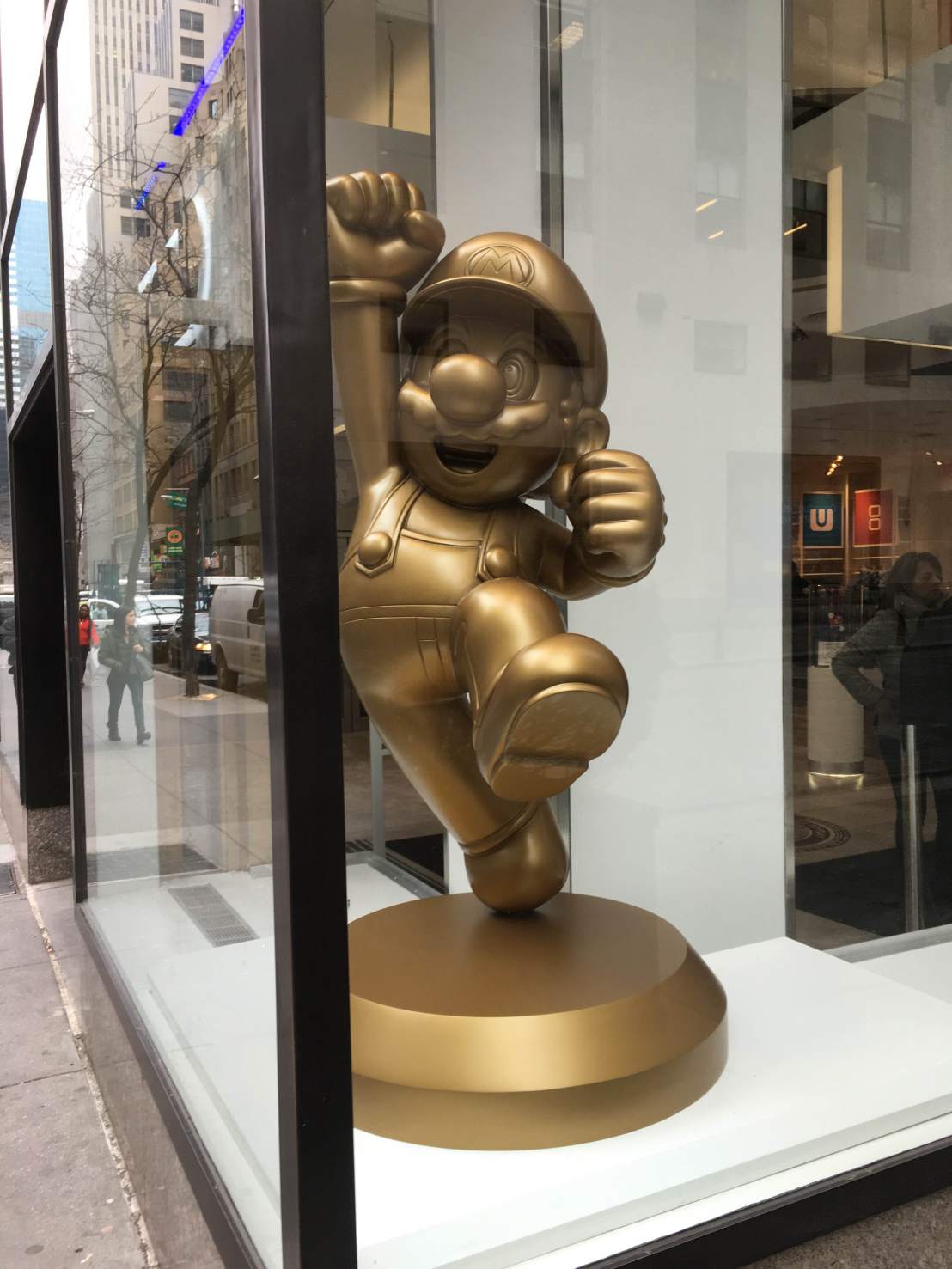 The very first thing I noticed when walking into the store, besides this beautiful little statue here near the entrance, was the music that played in the background the entire time I was there.  Personally, I like to listen to gaming soundtracks in my spare time – the songs from games I have or am currently playing usually act as a good source of inspiration, nostalgia and entertainment all at once.  At the Nintendo NY store, music from all Nintendo games from various points in history rang out through the building to entertain shoppers.  As silly as it might sound, that did make it a more special experience for me, especially since I was able to show my extensive knowledge base by naming songs from all over – be it Kirby, Mario 3D world, Pokemon Red/Blue and others – to the people I more or less dragged along with me. 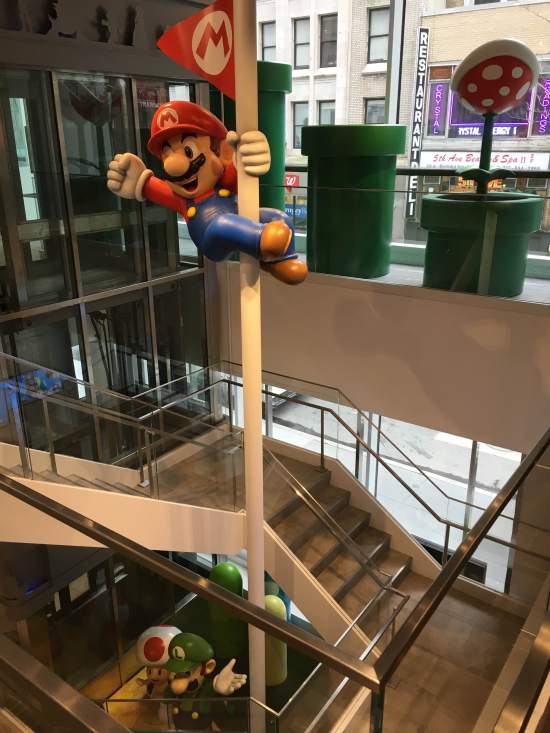 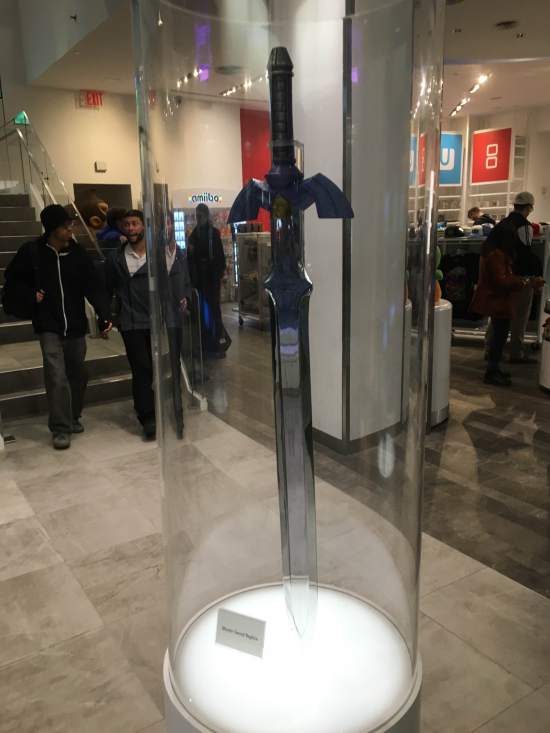 Another impressive thing about the Nintendo NY store was the amount of fanfare that decorated every inch of the store.  There were models of characters all around serving various purposes (such as the flagpole Mario decor shown above and a large Donkey Kong model for guests to pose with), there were models of various well-known Nintendo icons (like, of course, the Legend of Zelda’s Master Sword), there were screens with animated wallpapers on them depicting things like various Pokémon or the Luma from Super Mario Galaxy, and more.  At the very least, it was great to see the amount of variety in the representation of Nintendo’s various Independent Properties. 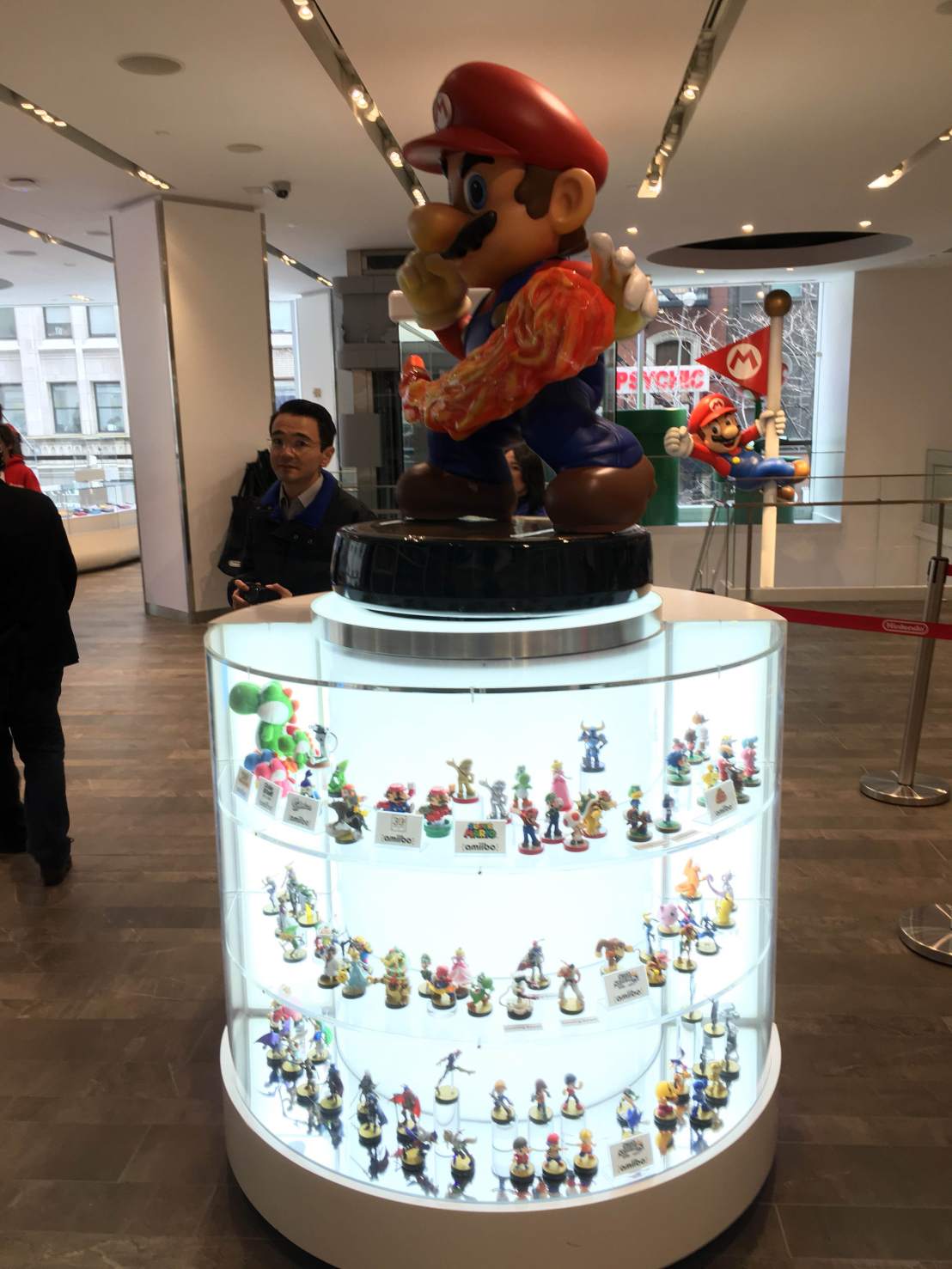 Of course, while the environment was wonderful and added to the experience, it wasn’t the reason I went to the store in the first place.  No, the reason I went, and the reason I’m sure most everyone goes, was for the merchandise.  And boy was that not a disappointment in any sense of the word.  For one thing… Well, amiibo.  Everywhere.  On display and for sale, these things were clearly a main attraction for anyone visiting.  There were plenty I hadn’t personally seen before for sale as well, such as Smash 4’s Olimar and Jigglypuff.  For people who aren’t into the collectable figurines side of fandom, there were also no shortages of shirts, plushes, goofy products and more from every game in the company’s arsenal.  Personally… I spent way too much money on all sorts of souvenirs for myself, my friends and my family, since I didn’t know when I’d get to come see the store – or New York in general – again.

Even if you aren’t interested in buying trinkets and collectable items, that doesn’t mean there’s no reason to step into the Nintendo NY store.  Between the background soundtrack and cool decor, there are plenty of things to see and interact with other fans over.  On the second floor there was even an entire half a room with Wii U consoles and 3DS systems laid out for various game demos to play yourself or with others!  Plus, there’s always the added bonus of being able to buy new Nintendo games while you’re there, so that’s always great.

Funnily enough, my experience with the store wasn’t all perfect, despite how much praise I feel I can heap onto it.  While I was there I learned a pretty valuable life lesson: Always call the bank when you travel out of state, otherwise your card could get locked up and prevent you from buying things easily.  I actually had to call my bank twice to be able to buy my gifts, which ate up large chunks of time and threatened both to make me late for our staff’s dinner reservations that night and to make me miss out on buying anything at all – the store’s closing time was at 8:00 p.m., the exact same time as the reservation we had a few blocks away!  Needless to say it was a very stressful experience, but not one that I can say wasn’t worth it despite the hardships.

Overall, visiting the Nintendo NY store was a very worthwhile stop to make on the list of landmarks to visit in the Empire State.  Not only did I get plenty of cool things for those other gamers close to me, just visiting the place was almost like a pilgrimage in itself!  A pilgrimage, I might add, I would advise anyone visiting or living around Manhattan to try.  Just be sure to plan your trip there before closing hours! 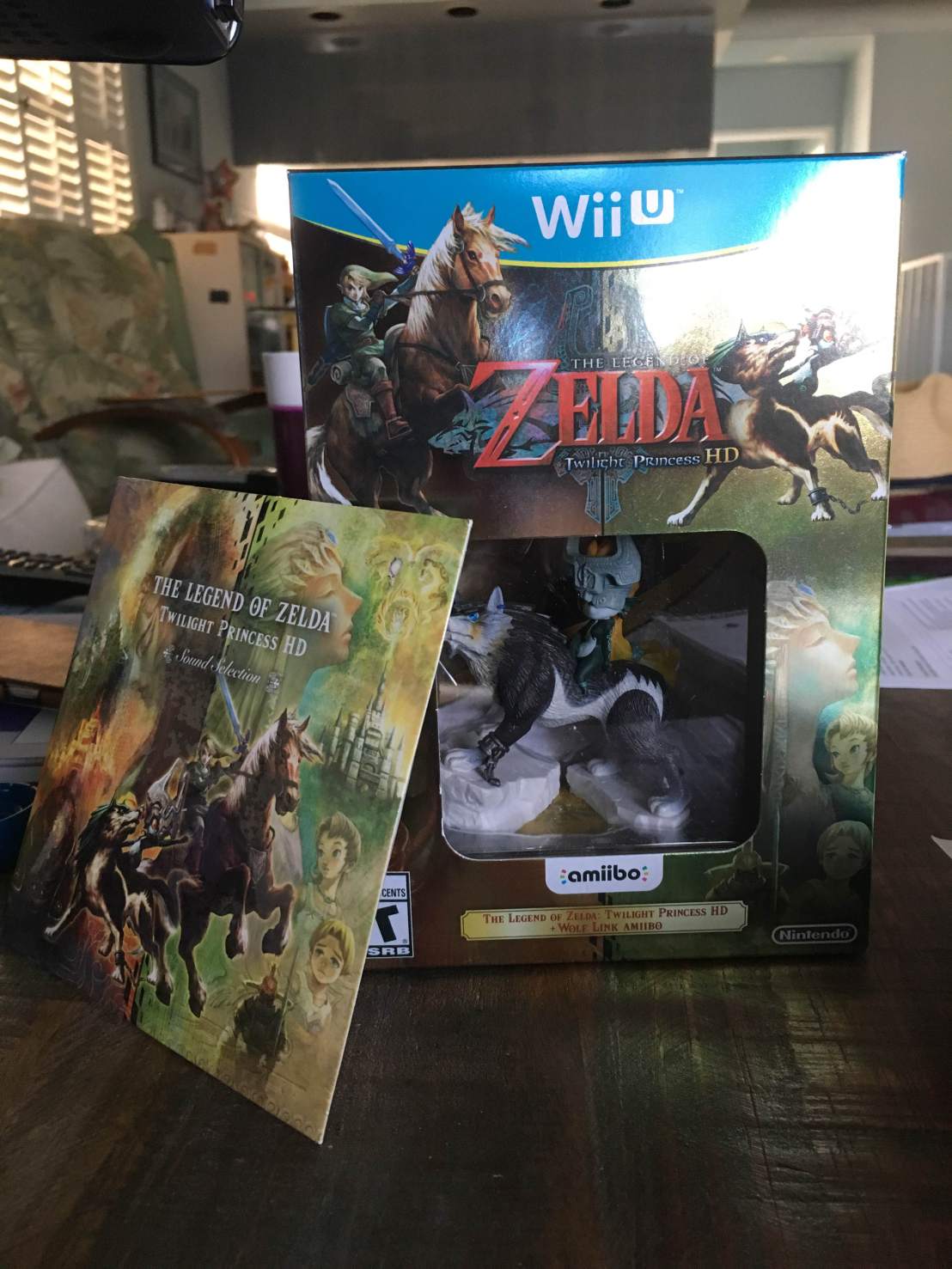 Life’s a bit too busy right now to sink a whole lot of time into the new and improved version of one of my favorite games of all time, but…

At least I have this to look at in the meantime: 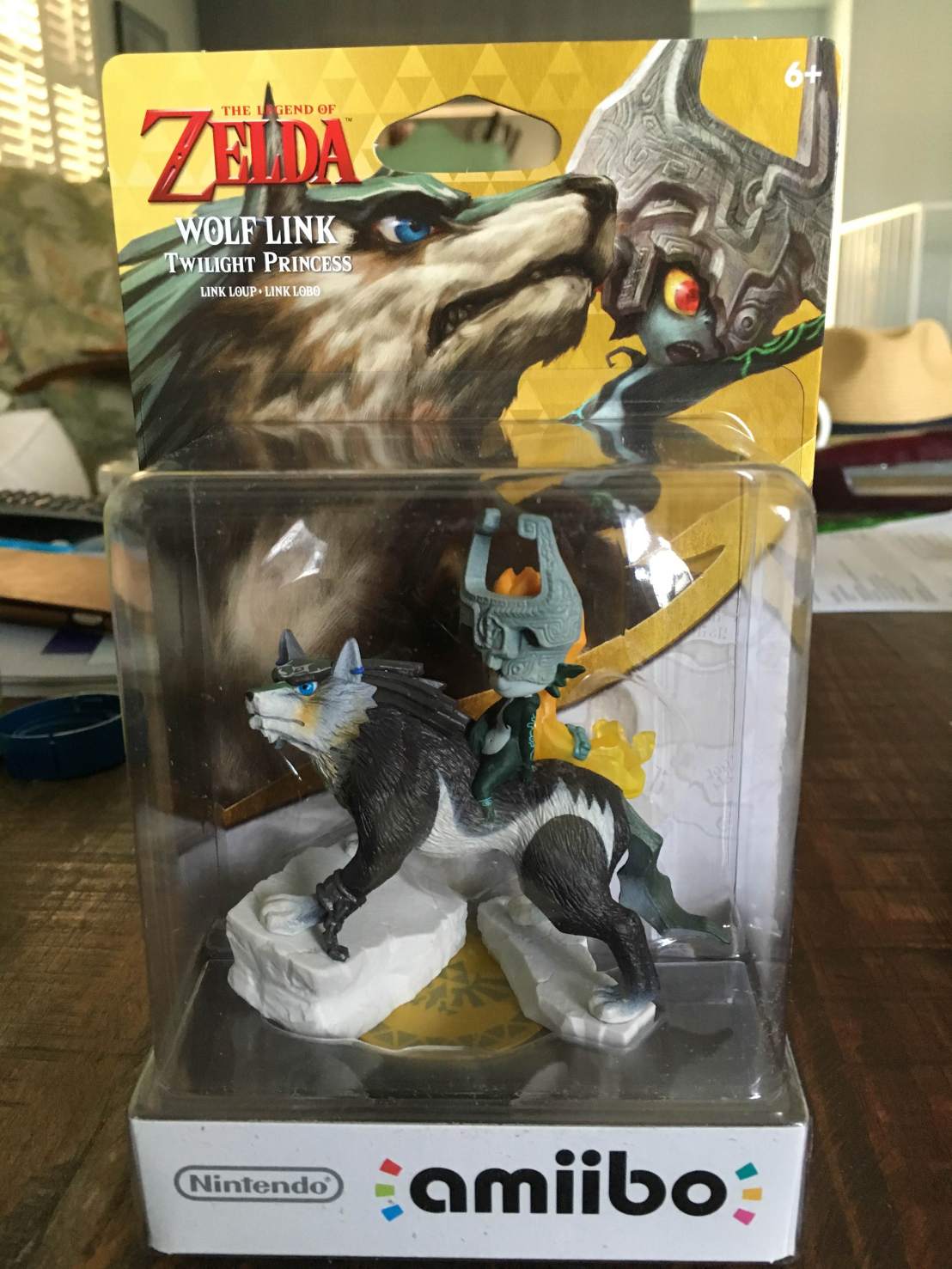 Man what a beautiful amiibo.  Spring Break is coming, Midna. I swear I’ll make time for you yet.

In sort of unrelated blog news, however, I might be trying to roll something new out tomorrow, so look forward to that if I don’t wind up having all my time sucked away by eminent travel plans. 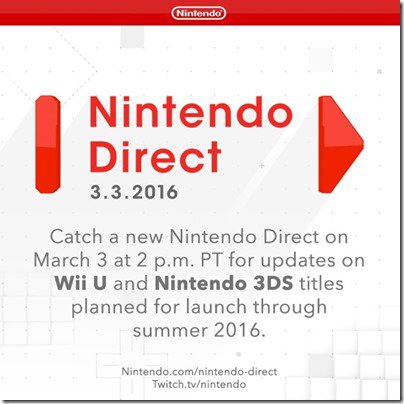 So, there was a Nintendo Direct today.

Glad I was in classes and missed out on watching it live.

But no matter, I watched the full 41 minutes post-haste, and now have plenty to say!  And I really mean plenty since… Well, there were a lot of announcements.  I’ll probably use The Hype to talk about a few of the games specifically in depth later, since I should theoretically be trying to make some kind of coherent list of regular post-styles on this new blog.  Luckily there’s been plenty of news to talk about recently!

I’ll also post the link to the Direct right here for anyone who missed it like me.

With the full list of announcements in front of me, I’m about ready to give a good paragraph’s thought or two on whatever happened to be new that peaked my interest – so read on if you want to see some first impressions.

At least, first put down in type.